As expected, hurdler Xiang Liu continues to be the brightest star of Chinese athletics. In the first two meetings of the national indoor series Liu was the sole athlete making results which indicated a possibility of a medal at the World Indoor Championships, in Budapest, Hungary (5-7 March).

The other most notable thing in the Hangzhou and Shanghai meetings was that most elite athletes were missing from competition but little did it matter because of course it was Liu that all reporters and spectators were waiting to see and he really delivered the goods in Shanghai.

Liu started quietly in the Hangzhou meeting. He won his 60m Hurdles heat in 7.99 and then the final with 7.68, and after the competition he said that the Hangzhou arena was way too cold for him, freezing to be exact. The overall results quality in Hangzhou was extremely low, with the only possible bright spot being the men’s Pole Vault mark of 5.40m by 18-year-old Liu Feiliang.

Overall depth was missing from Shanghai too, but Liu posted a threat to the world’s best in his heat of the 60m Hurdles clocking 7.63 to win his heat, and the final was surprisingly fast too, as with a 7.51 run he equalled his own Asian Record, his best mark in domestic competition before this was 7.63 from last season. Liu has always performed better abroad, so Allen Johnson (USA) can really expect some stiff competition from the young Chinese in Budapest.

"I am surprised, I simply had not thought that I could equal my Asian Record. This really gives me more confidence to run this fast in a national meeting."

Liu had even false started in the race and had to be careful on the second start. The unofficial timing initially gave 7.48 as the final time, but the official time was soon released to reveal the Asian Record ‘only’ to have been equalled. Liu said that he is bursting with energy to compete in Budapest, his coach was also surprised about the record which he had only expected to come in Budapest a few weeks later.

Shuying Gao, who has been a little below her best form lately, tried to overcome the Asian women’s Pole Vault record of 4.46m, but had no luck. A disappointed Gao had to be content with her winning mark of 4.36m.

Another promising youngster is Yingfan Liu in the women's Shot Put. Liu, who just had her 17th birthday earlier in February, won the competition with 17.21m. Liu had not competed at the national level before this season.

China won the 9th traditional indoor match against Japan in Tiajin with 140.5 points against 93.5. Japanese team was extremely inexperienced and there were no top results achieved. 18-year-old Yingying Zhao broke the indoor national junior record in Pole Vault with 4.20m. In the national competition, another indoor national junior best was achieved, 19-year-old Zheng Ting, from Tibet, surpassed the old High Jump mark of 2.21m with his 2.24m leap. Zhou Can, last year's silver medallist in the Asian Championships, won the Long Jump with a good mark of 8.07m, his indoor personal best.

However, Asian women’s indoor and outdoor Triple Jump record holder Qiuyan Huang was disappointed. After winning the competition with 13.80m, 60cm below her Asian indoor record of 14.40m from 2002, she said "I can't consider myself to be competing in Athens with these kinds of results." Huang's best outdoor mark is 14.72m, her winning mark in the 2001 National Games.

Another setback for Xuemei Li

Li Xuemei, the Asian women’s record holder in both the 100m (10.79) and 200m (22.01), suffered another setback before the Hangzhou indoor meeting. Li, who has been more or less injured since winning the 1997 National Games with the Asian Record times in both 100m and 200m, competed seasons 1998-2001 with minor injuries bugging all the time.

In 2001, she started brightly getting to semifinals at the World Indoor Championships over 60m. She recorded a national record of 7.19 there, but then was injured again. She competed only once in the early outdoor season taking second place in the East Asian Games in Osaka in May. After a fierce battle, she was able to come back to win the World University Games 200m in Beijing, but was again in problems and had to pass the 100m competition there. But two and a half months was enough for recovery and she went on to win another double in the 2001 National Games in Guangzhou.

However, the 200 m final in Guangzhou on 22 November 2001 remains her last competitive effort. She has been training hard for whole of 2003, but decided to pass the competitions to regain her form.

She was going to compete in the indoor season, but again felt strong pain while training in February. Li has ruled out an operation to take care of the injury, she wants to compete in the Olympic Games in Athens, and therefore she prefers to try an alternative medicine to overcome the injury problems. Li must be in shape in time for the National Championships and Olympic Trials which begin on 20 May in Shijiazhuang.

Wang Liping back on track

The reigning Olympic women’s 20km Race Walk Champion, Wang Liping, has restarted training healthy after giving birth to her first child in last November. China Athletic Association Vice President Luo Chaoyi said she is training again on a good level and will be looking to repeat her Sydney performance.

The bronze medallist of the Paris World Championships last year, Sun Yingjie, has been unable to train properly since December. While preparing for the World Championships last June, Sun fell while running and hurt her knee. However, she was able to recover from that a lot faster that was estimated and moved on to feature in the hectic 10,000m final in Paris.

In December the Chinese distance star was training indoors with a jogging machine and fell down,  with the accident causing a collar bone fracture. Now Sun is back in normal training, but the injury is still very painful.

In a recent interview Sun stated "I can take this pain if I get a medal from Athens in exchange". Sun, who represents the Railway athletics team, is training in the Northern Liaoning province, in the city of Shenyang. Although the famous coach Ma Junren is from the same area, Sun has never been coached by Ma. Most athletes of coach Ma come from the city of Dalian.

The next competition for Sun is the London Marathon, World Indoor Championships are out of the question because of the injury, and she never has never run too much indoors - her personal best in indoor 3000m is only 9:19.28 from 2002. 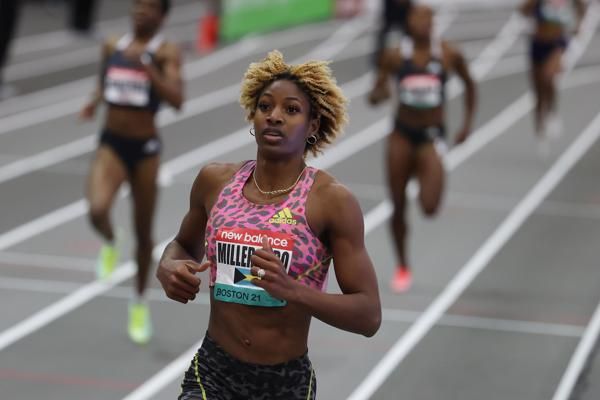