Town of Runners takes the top prize at FICA

Town of Runners, the 2012 documentary directed by Jerry Rothwell about young runners from the Ethiopian rural town of Bekoji, took the top prize – an impressive golden Achilles trophy – at the International Athletics Film Festival (FICA) in San Sebastian, Spain, on Saturday (10).

The town, just over 200 kilometres from the Ethiopian capital Addis Ababa, is where Tirunesh and Genzebe Dibaba and Kenenisa Bekele grew up and the film follows three teenagers as they move from their school track to national competition and from childhood to adulthood.

The 86-minute film debuted at the Tribeca Film Festival in New York in 2012 and has since gained great acclaim around the world.

“The initial idea for the film came from one of the producers, Dan Demissie, whose family are Ethiopian. I was excited by it because as a child I lived in Kenya in the 1970s, and my heroes weren’t George Best or Neil Armstrong, but the East African runners of the time, Kip Keino and Mike Boit. Much later, my daughter had become a keen athlete,” reflected the British director.

“Spending a lot of time on the side of running tracks and cross country courses in Britain, I was interested in how some children seize on a sense of their own potential and develop an ambition, which is strong enough to sustain them through the hardships of daily training. And I wondered how that played out in an African context.

“The girls’ stories are set against the background of a rural Ethiopia that is undergoing enormous changes as traditional ways of life are transformed by globalisation. On our first visit in 2008, the electricity supply was patchy, there was no mobile or internet, and Bekoji could only be reached by a 50-kilometre mud road from the nearest large town.

“By the time we completed the film, at the end of 2011, the Chinese had built a new tarmac road, connecting Bekoji to the capital Addis Ababa, a new hotel had been opened with satellite TV in every room, and mobile phones were everywhere. The film tries to capture this transition and what it might mean for a new generation of Ethiopians, in a country where more than 70% of the population is under 25,” added Rothwell, speaking in 2012.

Second place went to Ultra, a film by Hungarian director Balazs Simonyi which focuses on the 246km Spartathlon, while third was The Energy Within, a British fictional short film by the director Samuel de Ceccatty about a Paralympic runner’s dreams of becoming a top athlete and starring the two-time Paralympic T44 long jump silver medallist Stefanie Reid.

The Italian film 1968, Sports&Revolution received a special prize after a vote from the public during the five days of the festival.

Birmingham, Beamon and Montalvo in the spotlight

After the awards had been announced, making its debut was a special film made by the IAAF focussing on the IAAF World Indoor Championships Birmingham 2018.

The impressive film, the brainchild of IAAF Chief Editor and Video Manager Michael Lasserre, mixes evocative images from the championships, looking at the triumphs and failures in Birmingham.

Particularly impressive is the use of atmospheric music and sound effects mixed with the original sound from the arena generated by the competitors and spectators.

The final day was a conclusion of five days of films shown in the Basque city’s ornate 19th century Teatro Principal, which had seen 40 original entries from 16 different countries reduced to 16 films shown in competition, as well public screenings every night.

Former long jump world record-holder Bob Beamon, who found himself almost mobbed whereever he went in San Sebastian, was presented with an Honorary Achilles Prize on Thursday, an award designed and created specifically for the festival to honour athletes who have made a unique achievement to the sport.

Spanish long jump record-holder and 1999 world champion Niurka Montalvo was a recipient of a similar honour on Friday. 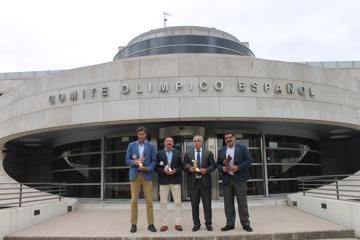 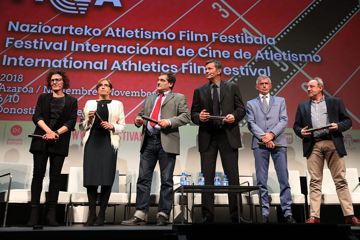