Three more London 2012 Olympic Games gold medallists and one reigning World champion have been added to the star-studded roster for the IAAF Diamond League meeting in Shanghai on 18 May, organisers announced on Friday (26).

Fraser-Pryce retained her Olympic Games 100m crown in London last August and was second over 200m before picking up another Olympic silver for Jamaica in the 4x100m Relay. She returns to Shanghai for the first time since 2010.

The 26-year-old became the fourth fastest woman ever when she set a new Caribbean and Central American record of 10.70 at the Jamaican championships last June while she also lowered her 200m best to 22.09 in the Olympic final last summer.

Rutherford enjoyed a dream season in 2012. He equalled the British record in early May to top the world lists and then went on to win an Olympic gold medal in front of his family and friends with a leap of 8.31m.

He won a European silver medal back in 2006 but Rutherford has never been on the podium at a World Championships. He will compete in Shanghai for the first time.

Defar also took her second Olympic 5000m gold medal in London when she regained the title she had won eight years earlier at the 2004 Olympic Games in Athens.

She is a former World record holder at the distance outdoors and currently holds World indoor records for 3000m, two miles and 5000m. Defar has also won five World titles indoors and out during her illustrious career.

Like the other three, Richardson will also have Moscow on his mind this summer as it will be where he will defend the World 110m Hurdles title against Merritt, his US team-mate who beat him to the Olympic gold medal in London.

The clash between Richardson and Merritt should be one of the highlights of the Shanghai meeting and a chance for both athletes to get an early confidence boost. Richardson was third in the Chinese city last year, one place ahead of Merritt in a contest won by the Chinese favourite Liu Xiang.

Another 2011 World champion, Yohan Blake, has sadly been forced to withdraw from the Shanghai meeting. The man who calls himself  ‘The Beast’ has a slight injury and needs to recover fully ahead of his World 100m title defence.

“I am so sorry for Shanghai, but because of a slight injury I will not be able to participate this year,” said the Jamaican.

“Everything happens for a reason. The last time I was in your part of the world, I came third in the world juniors (the 2006 IAAF World Junior Championships in Beijing). I was so looking forward to showing you just how much I have grown and transformed since then, but I guess that will now have to wait until my next opportunity arises,” added Blake. 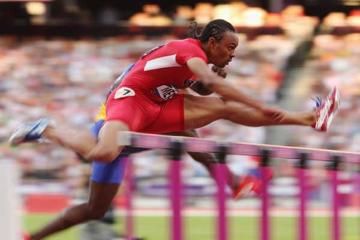