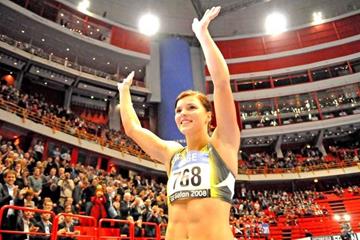 Kallur to make comeback at XL Galan in Stockholm

The former European champion set the existing 60m hurdles world indoor record of 7.68 in 2008. Eleven days later, she broke the XL Galan meeting record with 7.74, but injury forced her to withdraw from the World Indoor Championships that winter at the semi-final stage.

More misfortune came her way later that year when she crashed out of the semi-final at the Olympic Games in Beijing.

Since then, a series of injuries and setbacks has prevented the 33-year-old from putting together a full season. She competed in three 100m hurdles races in 2010, then finally made a tentative return to action earlier this year, competing in a small handful of 100m races.

But now the Swede is ready to return to hurdling and has one eye on making it to the 2016 Olympic Games. Her appearance at the XL Galan is a small but significant step on the road to Rio.

“It feels a bit like this is my last chance at a comeback,” she said on her website last year. “I have chosen not to rush but to let the body take plenty of time in getting used to the higher load again.”