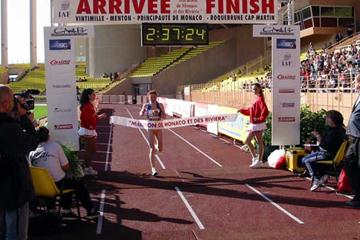 The race was started at 9.30am, in front of the IAAF Headquarters by S.A.S. le Prince héréditaire Albert, President of the Fédération Monégasque d’Athlétisme, and MM. Lamine Diack, President of IAAF, in the presence of dignitaries from the municipal areas crossed by the race - Roquebrune Cap-Martin, Menton, and Vintimille.

At the 32km point on the course - in Roquebrune-Cap-Martin - the men’s race reached it’s decisive moment, when Tadesse Hailemariam broke away from Kenya’s Ibrahim Mitei, eventually finishing first in Monaco’s Stadium Louis-II in 2:14:09.

The women’s battle looked like it would produce a victory for the French woman Chantal Dallenbach, who remained in contention for a long time but eventually Russia’s Maria Fedoseeva took the initiative and won the race in 2:37:24. Dallenbach finished fourth, just over three minutes adrift.