World Athletics is deeply saddened by the news that Harrison Dillard, the only male athlete to win Olympic titles in the 100m dash and 110m hurdles, died near his home in Cleveland, Ohio, USA, on Thursday (15). Dillard, who won four Olympic gold medals during his career, was 96, the oldest living US Olympic champion.

Born in Cleveland on 8 July 1923, Dillard began his athletics career in 1938 at East Technical High School, the same school that Jesse Owens attended just over a decade earlier. That connection to the all-time legend proved an important inspiration for Dillard, but so too did meeting his idol, albeit briefly, two years earlier at age 13 during a parade in Cleveland honouring Owens soon after his historic quadruple gold medal-winning achievement at the 1936 Olympic Games.

“Some of us youngsters were standing on the curb when he came by in this open black car,” Dillard said, recounting the story for the New York Times. “He was wearing a black suit with pinstripes and he said something like, ‘Hi, boys.’ I ran home and said, ‘Mama! Mama! I saw Jesse Owens and I'm going to be just like him!’ She said, ‘Of course you are, son.’”

That journey began at East Tech where coach Ivan Green taught him the basics of hurdling and gave Dillard the nickname “Bones”, an apt descriptor for his lanky frame, and a moniker he would carry through to the end of his career. He won two state titles in 1941, his final year in high school, before heading to nearby Baldwin Wallace College.

But his career was put on hold when he was drafted into the army in 1943. Dillard served in Europe during World War II as a sharpshooter in the 92nd Infantry Division, the so-called Buffalo Soldiers, the last racially segregated unit in the US Army.

After the war, he returned to Baldwin Wallace and athletics in 1946 and would soon become the finest high hurdler of his day. He won back-to-back NCAA and AAU crowns at 120 yard and 220 yard hurdles in 1946 and 1947 and equalled world records in both events, clocking 13.6 and 22.3, respectively. He famously pieced together an unbeaten streak of 82 races in the sprints and hurdles in 1947 and 1948 to emerge as an overwhelming favourite for the Olympic 110m hurdles title as the 1948 Games in London approached.

But disaster struck at the Olympic trials, where he nearly crashed out of the final and finished last. Fortunately, Dillard contested the 100m the day before, hoping to secure a leg on the sprint relay team. He pulled it off, finishing third to also earn a spot on the short dash start line.

During his journey to London, he diligently worked on his start in training sessions on the ship's main deck, workouts that would reap big dividends in the London final. Out quickly, Dillard prevailed in a photo finish over teammate Barney Ewell in 10.3 to equal the Olympic record. The race marked the first time a photo finish camera was used at an Olympic Games.

At the 1952 Olympics in Helsinki four years later, he completed his fabled story with victory in the 110m hurdles, leading a US medal sweep in 13.7 to break the Olympic record. He contributed relay legs on the victorious 4x100m relay quartets at both Games to lift his Olympic gold medal tally to four overall.

He continued to compete until 1956 when he decided to hang up his spikes after finishing sixth at the Olympic Trials that year just a few days shy of his 33rd birthday.

Dillard set four world records during his illustrious career and won 11 indoor and outdoor national titles. That includes eight consecutive indoors in the 60-yard hurdles, an event he won nine years in a row at the Millrose Games.

Dillard later worked for the Cleveland Indians baseball team as a publicist, as a local radio commentator and sports columnist. He remained a big fan of the sport for the remainder of his life, regularly attending local high school meets well into his 90s. He was honoured at the 2012 Olympic Games in London and attended the IAAF Centenary celebration Barcelona that same year.

BACK
Pages related to this articleAthletes
Harrison Dillard 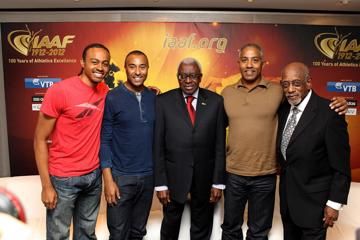 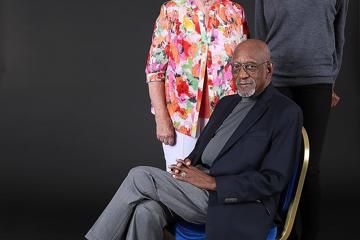