Organisers of the Airtel Delhi Half Marathon have announced that Tsehay Gemechu and Andamlak Belihu will defend their titles at the World Athletics Gold Label road race on Sunday 29 November.

The Ethiopian duo will both be aiming for an unprecedented third successive victory in the Indian capital, but both will race strong fields containing world champions.

Last year, Gemechu improved her own course record from 2018 by 50 seconds when she ran a stunning personal best of 1:06:00.

Ideally, Gemechu would like to go even faster this year but, like so many runners around the world, her training and racing this year have been hugely impacted by the Covid-19 pandemic.

“Covid-19 is a disaster which has affected everyone's life all over the globe and, definitely, it has affected my training, not least in the early stages of the pandemic when we were all fearful of infection,” said Gemechu, who will turn 22 next month.

“Later, my coach and I decided to take care of ourselves, taking into account all the advice from the World Health Organization, and I started my own individual training programme with my main goal of coming back to Delhi.”

Gemechu will have a host of outstanding rivals in this year's race, arguably the strongest women's field ever seen in the history of the Delhi Half Marathon with seven women having run under 67 minutes.

Among them are two of her compatriots, Yalemzerf Yehualaw and Netsanet Gudeta, as well as world marathon champion Ruth Chepngetich.

The in-form Yehualaw finished second at the 2019 Deli Half Marathon, just one second behind Gemechu, and showed she's a rising star of distance running by finishing third at the World Half Marathon Championships in Gdynia last month in a personal best of 1:05:19.

Gudeta, the 2018 world half marathon champion, was eighth in Gdynia after falling over mid-race, but helped Ethiopia to team gold.

Chepngetich won the world marathon title in Doha last year, having clocked PBs of 1:05:30 for the half marathon and 2:17:08 for the marathon earlier in the season. More recently, she finished third at the London Marathon in 2:22:05.

Belihu will be aiming to finally go into new territory on the streets of Delhi, perhaps even finishing inside 59 minutes, and confirm his place as the most successful runner in Delhi Half Marathon history after having also placed second in his race debut in 2017.

“I have been training well in Addis Ababa for the last couple of months and I am very thankful to have the opportunity to race in Delhi, a city I always enjoy returning to and racing in,” said Belihu, who will turn 22 just over a week before race day.

“This has been a difficult year, for everyone around the world, not just professional athletes, due to the Covid-19 pandemic and I have been training alone much more than I am normally used to,” he added. “But my fifth place at the World Half Marathon Championships in Poland last month has assured me that I am in good shape and I am confident I can put up a good defence of my title.”

An unprecedented 13 men in this year’s elite field have sub-60-minute PBs, and five of them have actually run faster than Belihu in their careers, including Adola who returns to Delhi for the first time since his record run six years ago.

The fastest man in the field is Bahrain's 2018 world half marathon silver medallist Abraham Cheroben, who holds the Asian record for the distance with 58:40.

Two other men to watch will be the Ethiopian pair of Amdework Walelegn, who was second in Delhi last year and took the bronze medal at World Half Marathon Championships last month, and two-time world 5000m champion Muktar Edris, who will be making his half marathon debut.

The 2020 Delhi Half Marathon will be unlike any previous edition with an estimated 60 elite international and Indian runners in action on the Delhi roads, with the traditional start and finish still in the Jawaharlal Nehru Stadium. The event will follow the highest level of safety and hygiene standards with bio-secure zones to ensure a Covid-19-free race.

BACK
Pages related to this articleAthletes
Muktar EDRIS 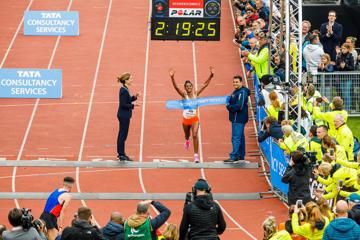