2018 in review: combined events and relays

Our 2018 review series continues with statisticians A Lennart Julin and Mirko Jalava looking back at the combined events and relays.

The fight for the title of the best all-round athlete started fierce indoors.

While Mayer was concentrating on the European Championships in Berlin in August, Warner was fastest out of the blocks outdoors and set a national record of 8795 to win the prestigious Hypo-Meeting in Götzis at the end of May. It was his second decathlon of the season as he had competed at the Commonwealth Games seven weeks prior but exited the competition after failing to register a height in the pole vault. He had been on course for a big score in Gold Coast, having opened his series with a PB of 10.29 in the 100m.

Mayer was in great form ahead of the European Championships, producing big personal bests across the board including a 52.38m discus throw in Ratingen in June. But he left the German capital bitterly disappointed after he fouled all three of his attempts in the long jump. The 26-year-old, however, did not let this ruin his season and instead he channelled all of his energy into the Décastar meeting in Talence in September.

Kevin Mayer celebrates at the Decastar meeting in Talence

Mayer’s momentum continued on day two with 13.75 in the 110m hurdles, 50.54m in the discus and 5.45m in the pole vault – all of which were his best ever marks within a decathlon. A PB of 71.90m in the javelin meant the world record was a near certainty. He covered the 1500m in 4:36.11 to bring his tally to 9126, a significant improvement on a world record that had been expected to last much longer.

Mayer and Warner weren’t the only decathletes to gain redemption, though. Having spent many years on the sidelines through injury, Germany’s Arthur Abele triumphed on home soil at the European Championships with 8431. Having also won in Ratingen earlier in the year with a season’s best of 8481, Abele ended 2018 as the IAAF Combined Events Challenge winner.

Since her senior breakthrough at the 2016 Olympics, Nafissatou Thiam has remained undefeated in the heptathlon, so 2018 was year three of the Thiam era.

Having come within 19 points of the 7032 European record last year, Thiam mounted another serious challenge in Götzis in May until throwing just 47.20m in the javelin, effectively losing some 200 points compared to her PB series.

At the European Championships, Thiam’s record aspirations were put to bed quite early when Thiam – with had set a PB of 2.01m in Götzis – had to be content with 1.91m in the high jump, her best event. She bounced back, however, and was flawless in the remaining events, sealing the gold medal with her second-best ever javelin throw of 57.91m.

Nafissatou Thiam in the heptathlon javelin at the European Championships

Katarina Johnson-Thompson was Thiam’s main challenger in Berlin. The Briton started the year by winning the world indoor pentathlon title and the Commonwealth heptathlon crown before taking silver in Berlin with a PB of 6759.

Both Thiam and Johnson-Thompson did just two heptathlons in 2018, so for the third straight year European bronze medallist Carolin Schäfer won the Combined Events Challenge.

The future of the heptathlon looks bright. Thiam is just 24 and no one else in the top 50 has yet turned 30, and it surely won’t be long before Britain’s world U20 champion Niamh Emerson and Spain’s European U18 champion Maria Vicente make an impact on the senior ranks.

No senior outdoor global championships were held in 2018, which played a big part in how relays were run, but there were numerous notable performances from the various continental championships.

Japan was the first nation under 38 seconds in the men’s 4x100m this year, clocking a world-leading 37.85 in Osaka in May. Olympic silver medallists in 2016 and world bronze medallists in 2017, Japan added a continental crown to their collection by winning at the Asian Games in August.

Their world lead didn’t last the duration of the season, though, as Great Britain clocked 37.61 when winning at the IAAF Diamond League meeting in London in July in London. The British quartet went on to win the European title in 37.80.

Turkey, boosted by world 200m champion Ramil Guliyev on the anchor leg, earned European silver in a national record of 37.98. The Netherlands was not far behind in 38.03, another national record, to take bronze.

An Americas team comprising US pair Mike Rodgers and Noah Lyles and Jamaican duo Yohan Blake and Tyquendo Tracey won the 4x100m at the IAAF Continental Cup Ostrava 2018. Their time of 38.05 wasn’t particularly fast, but they won by a significant margin of 0.91 from Turkey, representing Europe.

There were no major global match-ups as 2018 contained neither an outdoor senior global championship nor the World Relays. The top race came at the European Championships in Berlin which produced the top four national team marks including the only sub-42-second clocking of the year.

That 41.88 belonged to Great Britain and Northern Ireland which, thanks to a blistering anchor leg by Dina Asher-Smith, left the Netherlands, Germany and Switzerland a couple of meters behind.

Three IAAF Diamond League meetings included the women’s 4x100m with the same handful of nations excelling. Switzerland won from Germany and the Netherlands in Lausanne, while Britain won in London and Zurich.

USA and Jamaica, the traditional relays powerhouses, never fielded full-strength national teams. Louisiana State University ended up as the top US quartet of 2018 with their winning run of 42.05 at the SEC Championships in May.

As is often the case in a non-championship year, many of the fastest times of the season were run at the NCAA Championships.

Anchored by Michael Norman, University of Southern California’s winning time of 2:59.00 at the NCAA Championships in Eugene in June ended up being the fastest time of the year. Texas A&M placed second, also finishing inside three minutes.

The United States was the first national team to run a sub-three-minute time this season, winning the World Cup in London in July in 2:59.78.

There were fast times at continental championships too. Qatar broke the Asian record when winning at the Asian Games in 3:00.56 with 400m hurdler Aberrahman Samba and 400m specialist Abdalelah Haroun on the team. Kenya, meanwhile, won the African Championships in 3:00.92 in Asaba.

Qatar's 4x400m team after winning at the Asian Games

The European Championships final was the deepest quality 4x400m race this season. Belgium, with three Borlee brothers teaming up with world U20 champion Jonathan Sacoor, won in 2:59.47. Great Britain was second in 3:00.36, while Bruno Hortelano anchored Spain to bronze in 3:00.78.

At the IAAF World Indoor Championships Birmingham 2018 earlier in the year, Poland produced one of the biggest surprises of the championships by taking gold in a world indoor record of 3:01.77. It ended up being their fastest time of the season as their fastest outdoor performance was 3:02.27.

In a year of limited activity for the women’s 4x400m, there were three significant races: the Commonwealth Games in April, the World Cup in London in July, and the European Championships in August.

Jamaica won the Commonwealth title in a world-leading 3:24.00 with Nigeria more than a second behind and Botswana another one-and-a-half seconds in third place.

At the World Cup, USA and Jamaica battled to the finish line with the USA prevailing by a mere hundredth in 3:24.28. The top duo was followed by the closely bunched European trio of France, Poland and Great Britain.

These three nations were also highly involved four weeks later in the fight for the European Championships medals. Poland came out on top in Berlin ahead of France and Great Britain with Belgium narrowly missing a place on the podium.

The winning time of 3:26.59 was the slowest at the European Championships since 1971 which probably was partly due to the fact that the women’s 4x400m was held just 90 minutes after the individual 400m final, meaning many top runners were either tired or gave the relay a miss. 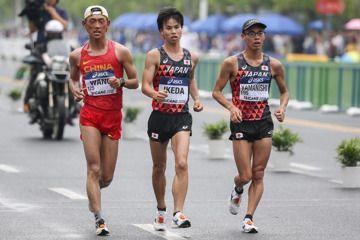