Finally part of US team, Wilson is keen to succeed in Moscow

When an event is scheduled last in a competition programme, you know it’s going to be a good one.

The men’s 110m Hurdles was the final race of the US Championships in Des Moines last month and it did not disappoint. The field included Olympic champion and World record-holder Aries Merritt, World champion Jason Richardson and three-time US champion and former national record-holder David Oliver. But none of those athletes won.

Instead, the unsponsored 32-year-old Ryan Wilson caused one of the biggest upsets of the championships to win his first national title, defeating his more decorated opponents in 13.08.

Merritt, Richardson and Oliver may have been surprised, just like most of the fans who were watching in person or online. But Wilson was anything but shocked.

“Even though I'm 32 and it's taken me a while to make my first team, it’s not like I've been chopped liver for 10 years,” said Wilson, who is originally from Ohio but now lives in Los Angeles. “I’ve been regularly ranked in the world’s top 10, so it’s not a surprise. A lot of fans were surprised, but I wasn't.”

His 13.08 in Des Moines was the second-fastest time of his career. Wilson’s lifetime best of 13.02 dates back to 2007, which would have made him a medal favourite at that year’s IAAF World Championships, but he suffered from cramp in his groin in the final of the US Championships and failed to finish.

That was one of several misfortunes Wilson has suffered over the years, denying him the opportunity to represent his country at major championships. At the 2008 Olympic Trials he was carrying a hernia and missed making the final by one place, despite running 13.36 in his semifinal.

One year later he tore his hamstring just before the US Championships, missing his chance to make the team for the Berlin World Championships. At last year’s Olympic Trials he hit the seventh hurdle in the final and finished seventh in 13.24.

Wilson has in fact twice finished in the top three at the US Championships, but unfortunately for him, there were no major championships to qualify for on those occasions.

Long road to the top

Wilson has been among the world’s best hurdlers for the best part of a decade. Back in 2003 he used to dabble in the 400m Hurdles, but after running a lifetime best of 49.33 he opted to focus exclusively on the sprint hurdles. That decision paid off and less than a month later he won the NCAA title in a personal best of 13.35.

Although he turned professional in 2004, it would be a few seasons before he really made an impact. Despite not having a sponsor, Wilson ended 2007 with the fourth-fastest time in the world, a feat he replicated in 2010.

“When I ran 13.02 in 2007, I wasn't sure how to recreate that, so I spent the rest of the year trying different things, trying to get back there and to run faster,” he said. “Now I know what I'm doing. I’m stronger this year compared to when I set my PB. I’m also faster and I have a lot more experience.

“One of the reasons we are always willing to line up against each other every week is because there’s more going on than just trying to beat your opponents. You’re racing 10 hurdles as well. We’re always trying to hone and perfect our craft. It’s more than just being faster than the other guy. Because of that, we all respect each other and we’re always thinking about the bigger picture, not just our egos.

“Hurdling is an art form, more so than many of the other events. It’s still technical, so when you combine sprinting speed with the technical prowess you should have to hurdle, you get people who are more analytical.”

Wilson’s analysis of his own hurdling two years ago saw him adopt a seven-stride approach to the first hurdle; the same change that led to the breakthroughs of Merritt, Oliver and Dayron Robles in recent years. Over the past winter, though, Wilson says few things have changed.

“We always make little changes to our training, but nothing major,” said Wilson, who is coached by Darrell Smith. “It’s still the same base, maybe a little more speed work this year, but they’re just little changes to get myself ready.

“Between now and the World Championships, I’ve got maybe two or three specific things that I’m going to keep hammering away at. When I do those things correctly, my races go great. When I don’t do them, they’re just alright.”

Wilson also says that seeing US team-mate Merritt break the World record with 12.80 last year didn’t make him any more fired up for this season.

“I don’t think anything could make me more motivated,” he said. “I put a lot of pressure on myself to do well; I’m a pretty motivated athlete. So I don’t think Merritt’s 12.80 was any more motivation, it just raised the bar and that’s nice, it’s good for the sport to raise the bar like that. Going forward, hurdlers will have to be that much better in order to get that record.”

US medal sweep the goal for Moscow

After a short-lived contract with Saucony, Wilson has been competing without a sponsor again this year. A talented artist and graphic designer, Wilson likes to show his creativity by wearing different coloured outfits in each of his competitions.

But despite not having that key financial backing, and following his numerous near-misses in the past, leaving the sport was never an option for Wilson. Not as long as he feels he still has goals left to accomplish.

“I never thought about quitting,” he said. “At 32, I’m not old either. Obviously it’s special to make the team, no doubt. To me it means nothing more than the opportunity to compete on the biggest stage. It hasn't changed my life yet. I'm hoping I win the World Championships – that will change my life, but I don't think it will change me as a person all that much.

“I'll say this – it does feel really special to be US champion. To be able to say that in one year you’re the best in the US on that day – that’s a great feeling.”

In each of the past few years the US has had a different athlete leading the way in the sprint hurdles. Last year it was Merritt, winning Olympic gold and the World indoor title. In 2011 Jason Richardson took gold at the World Championships. The year before that, Oliver dominated the international circuit. So could this be Wilson’s year to shine?

“I think this year’s going to be a very even year,” said Wilson. “It’s going to be one of those years when you have four, five maybe six different guys vying for that top spot, which is always the best kind of year. For the fans it’s great and for the athletes you get to find out who can compete well. “

Making it on to the US team for any event is a feat in itself, but none more so than the sprint hurdles where the nation boasts incredible depth. This year there will be four 110m hurdlers on the US team, as reigning champion Richardson gets a wildcard entry.

“I really think it’s the strongest team the US has ever put forward. It’s not even arguable,” he said. “We have the No.1, No.2, No.9 and No.12 on the US all-time list. Think about it, that’s incredible. Three of those guys are sub-13 athletes; hopefully by the time of the World Championships it will be four guys.”

Wilson could perhaps take inspiration from the fact that fellow US hurdlers such as Allen Johnson, Dominique Arnold, Jack Pierce and Mark Crear all dipped under the 13-second mark while in their thirties.

But for now, times are a secondary goal for Wilson. His main aim is to make history in Moscow.

“It’s our best chance so far to sweep the medals; we’ve really got a good chance to do that,” he said. “There are other guys out there who are great and have a good chance of winning a medal. But we'll see what happens.

“I’m really proud to be a part of this team in this particular year. And I’m hoping to be part of something extremely special in Moscow.”

BACK
Pages related to this articleAthletes
Ryan Wilson 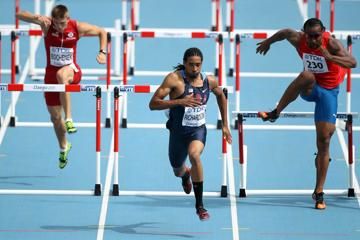