After proving them wrong, Poole has high expectations

On the surface, it shouldn’t make sense. The high jump, we have long been taught, is an event where height is not just an asset but an essential ingredient in becoming world class. Every so often, though, an athlete comes along who defies convention, one whose disregard for the laws of physics makes us step back and question what we once assumed to be true.

Step forward Breyton Poole, the 17-year-old South African who on Saturday afternoon claimed high jump gold at the IAAF World U18 Championships Nairobi 2017 with an astonishing leap, arcing his 1.72m (5ft 7in) body up and over a bar set to 2.24m.

In that moment, as a what-just-happened hysteria raged through the crowd in the Kasarani Stadium, both Poole and his coach Bennie Schlechder knew they had finally shredded any assertions that he was too small for his event.

It’s something he had heard since the age of 10, when Poole first dabbled in the high jump at his athletics club in Cape Town. “They thought I wouldn’t be able to adapt to it because I was so short,” he says. “I proved them wrong.”

If Poole is small now – relative to his high-jumping peers at least – then he was positively micro back then, but nonetheless he adapted well to the event, combining it with his first love, rugby, a sport in which he would go on to play as a scrum-half at national level.

At the age of 13, he teamed up with coach Bennie Schlechder, a retired teacher from Namibia who has been living in South Africa since 2004. Schlechder was aware of the potential limitations of Poole’s height, but he had studied the greats of the event and how an athlete like Stefan Holm, at 1.81m (5ft 11in), had managed to clear 2.40m.

“Holm showed us it’s absolutely about technique and speed,” says Schlechder. “When we started working together Breyton had a semi-circle run-up that he used from primary school but I changed it. We tried to shorten and shorten it and people ask us: ‘what are you doing?’ But it’s speed jumping.”

Throughout his teens Poole continued to play rugby alongside athletics, but coming into 2017 Schlechder put the foot down: “I stopped him. I said: ‘no way with a world championships coming up in Nairobi.’”

Despite rugby being put on ice, Schlechder didn’t ramp up Poole’s training, and even now his weekly load is less than most of his peers.

“He trains for one hour a day, four days a week, sometimes only three days a week,” says Schlechder. “I try to give him all the aspects in one session: warm-up, functional jumps, technique, speed and plyometrics.”

Poole’s coach was trackside on Saturday morning as he took his first tentative steps in the boys’ high jump final, and offered some stern words after his protege had a first-time failure at just 2.02m.

“I was messing up in the start and he told me which way to go,” says Poole. “I felt under pressure, I put myself under pressure, but Bennie said to enjoy the crowd. Luckily I got myself together.”

Still he went higher, hoisting himself over 2.22m at the first attempt, and then incredibly over 2.24m at the third time of asking. The fans lapped it up, clapping and cheering and celebrating every one of his clearances.

“He’s a crowd-pleaser,” says Schlechder. “He likes the crowd, the camera, the media, and he thrives on that. He’s mentally very strong.”

In the moments after Poole was a picture of elation, draping himself in the South African flag, telling his compatriots back home how much he loved his country and explaining how his main method of celebration will be to “eat a lot”.

Hang around the mixed zone long enough at events like this and you get to see why some succeed in underage championships; most winners are at an advanced stage of physical maturity relative to their peers, but Poole, once again, is the exception.

“He’s a child, a boy, so there’s lots of potential to go further,” says Schlechder. “He’s the total package: dedicated, a performer and he has his feet on the ground.”

That much was clear from talking to Poole afterwards, who says in his spare time he likes to hang out with his family or visit the beach in Cape Town. With one year left in school, he knows a cross-roads is approaching, but he’s seen enough now to follow this current path.

“Long-term the goal is to keep myself injury free and keep doing what I’m doing,” he says. “After I finish school I’ll hopefully go into athletics and pursue a professional career.”

And though he’s not finished growing just yet, Poole is aware that path will require him to defy the odds – to be a high jumper whose lack of height is made up for by lightning speed, explosive power and an elastic ability to twist himself over the bar.

Much like Stefan Holm, too, he knows his feats give purpose to those of average height trying to make it in a realm monopolised by outliers.

“It hasn’t been a problem for me,” he says. “It’s always been a motivation because I inspire others, the shorter athletes. That’s why I jump.”

BACK
Pages related to this articleAthletes
Breyton Poole 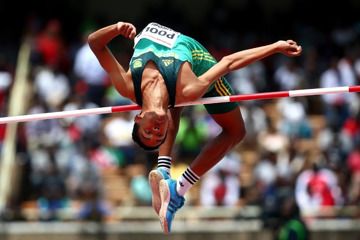