A measure of a true champion is how they respond when the pressure is on, their ability to produce the biggest performance of their life when it matters most.

For Mike Powell, that moment came on 30 August 1991 – 30 years ago today – at the World Championships in Tokyo in what went down as one of the greatest duels in athletics history.

Going into the event, it hadn’t particularly been billed as one of the big clashes of the championships as Carl Lewis was such a heavy favourite. The US superstar was undefeated in 10 years in the long jump and had won the past two world titles and Olympic gold medals in the event. He also went into the final in the form of his life, having set a world record to win the 100m title just five days prior.

But Powell was quietly confident that he could end Lewis’s winning streak.

“I had been chasing Carl for eight years,” Powell recalls. “When I first started competing against him, he was beating me by 50 centimetres. But in the last competition before the World Championships, he only beat me by one centimetre on his last jump.

“I knew that I was closing the gap and I felt like at the World Championships that was going to be my opportunity to finally beat him.

Powell, meanwhile, had a best of 8.66m and had taken silver behind Lewis at the 1988 Olympic Games. But when he set foot in Tokyo, Powell could sense something different in the air – quite literally.

“I felt special the first time I stepped on the track in the couple of days prior to the competition because it was really, really fast,” he said. “People were complaining about the weather but to me it was perfect because there was a typhoon that was supposed to be coming in so it was really muggy and it was the kind of weather where at any moment there would be a lightning strike with no rain around, so there were ions in the air and it was filled with electricity. It was the same kind of weather when Bob Beamon broke the world record.”

When the final got underway, the first round went in Lewis’s favour. The defending champion sailed out to 8.68m to add one centimetre to his own championship record. Powell, meanwhile, managed just 7.85m.

“We were different because Carl would jump consistently all day, while I started off a lot slower and I had to figure things out,” explained Powell. “When Carl jumped 8.68m, I wasn’t surprised at all. My first jump was horrible, because I was pressing really hard. But after that I said, ‘okay, calm down, just go back to your normal stuff and get a good jump in’.”

The calm approach worked well for Powell, and in the second round he landed an 8.54m jump to put pressure on Lewis, who had fouled his second attempt. 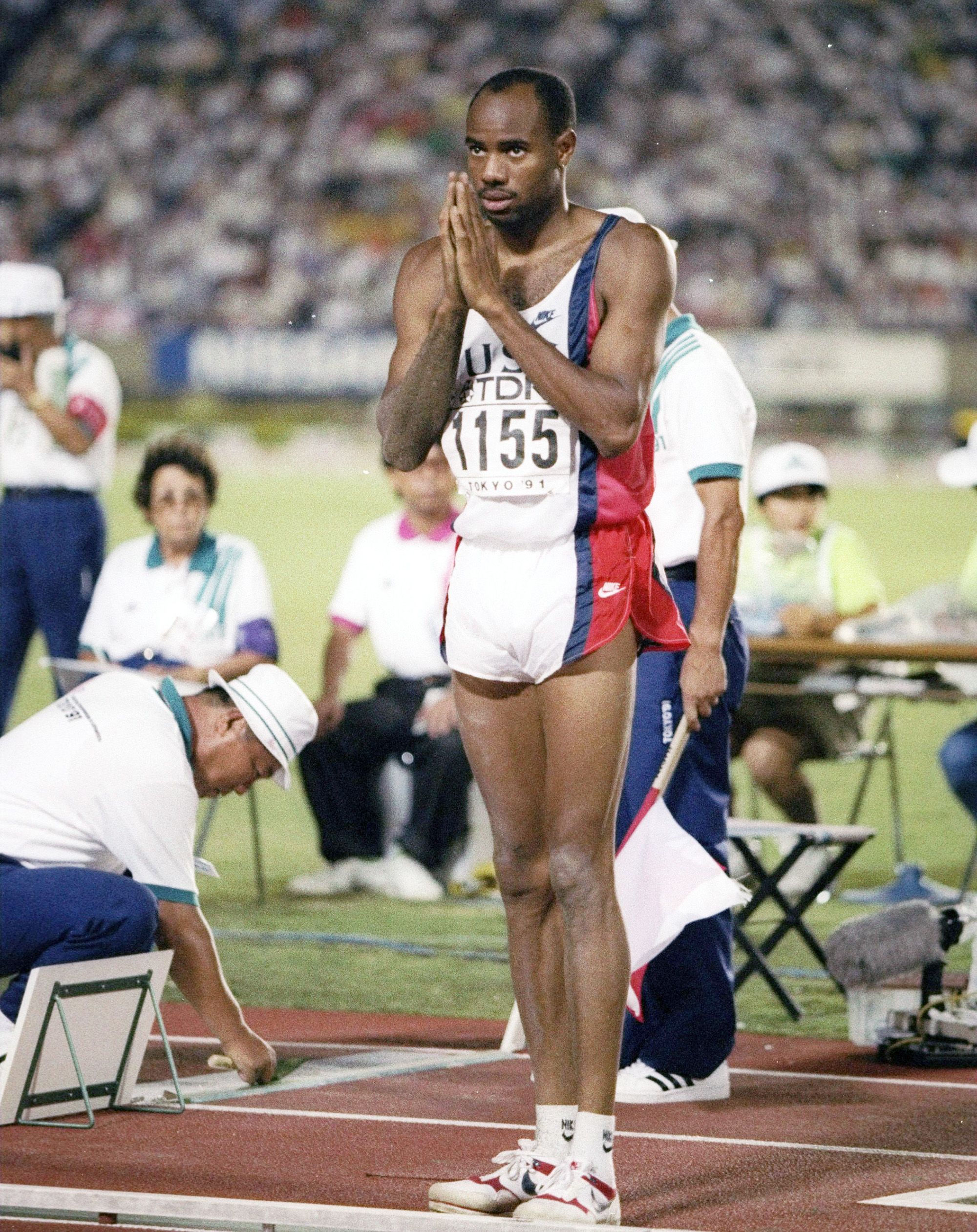 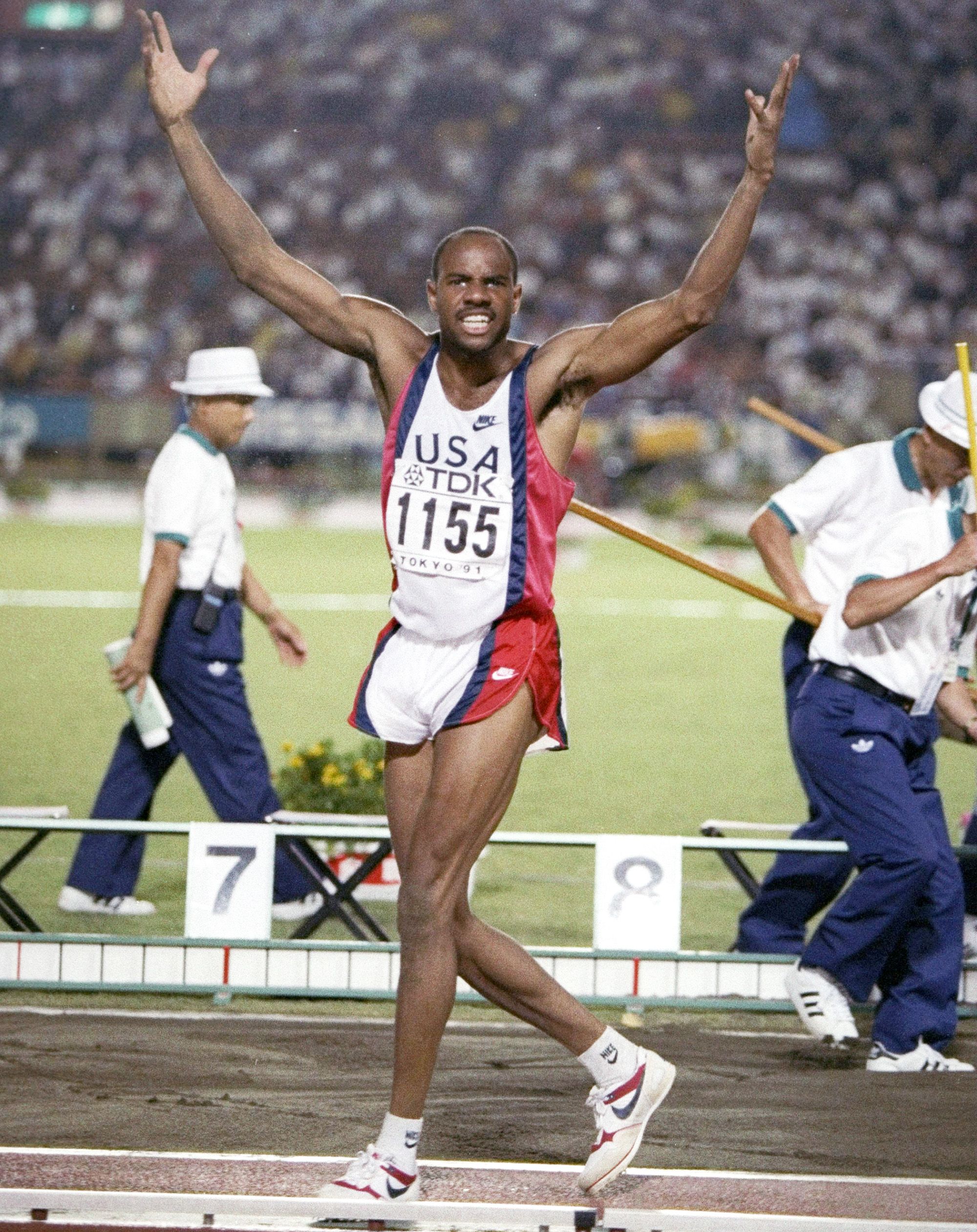 “In my mind I thought, ‘ah, that’s probably about 8.25m, maybe 8.30m’,” said Powell. “So when they said 8.54m, I was really excited because I knew I had a lot more to go. I spoke to my coach Randy Huntington and he gave me suggestions of what to focus on. At competitions I would always look up to him to get advice.”

Just as Powell was getting started, Lewis extended his lead in the third round, bounding out to a wind-assisted 8.83m.

“I thought to myself, ‘that’s far but I don’t think it’s quite a world record’,” recalls Powell, who managed 8.29m in that same round. “He was definitely letting it be known that he was going for it.”

Lewis landed another big leap in the fourth round. The wind reading came up first – 2.9m/s, over the allowable limit – followed by the distance, 8.91m. It wouldn’t be accepted for record purposes, of course, but the fact it was farther than Beamon’s mark was significant.

“Carl pumps his fists to the crowd and he jogged past me going ‘yeah, that’s right, that’s right’,” Powell remembers. “At that moment I was so angry. I said to myself, ‘okay, now we’re about to get it going now, I’m ready to go’. I was going to wait until my last jump to really get it going, but I was so fired up from his response to his jump.”

In round five, Powell produced the jump of his life.

“I was angry, my adrenaline was so high. I was going through my visualisation and I never saw it more clearly so I just thought to myself ‘go, start going’. I had a great jump, I got a lot of air time, and then the crowd let me know how far it was because they were screaming and I could hear people saying ‘world record’. It was so loud in the stadium. 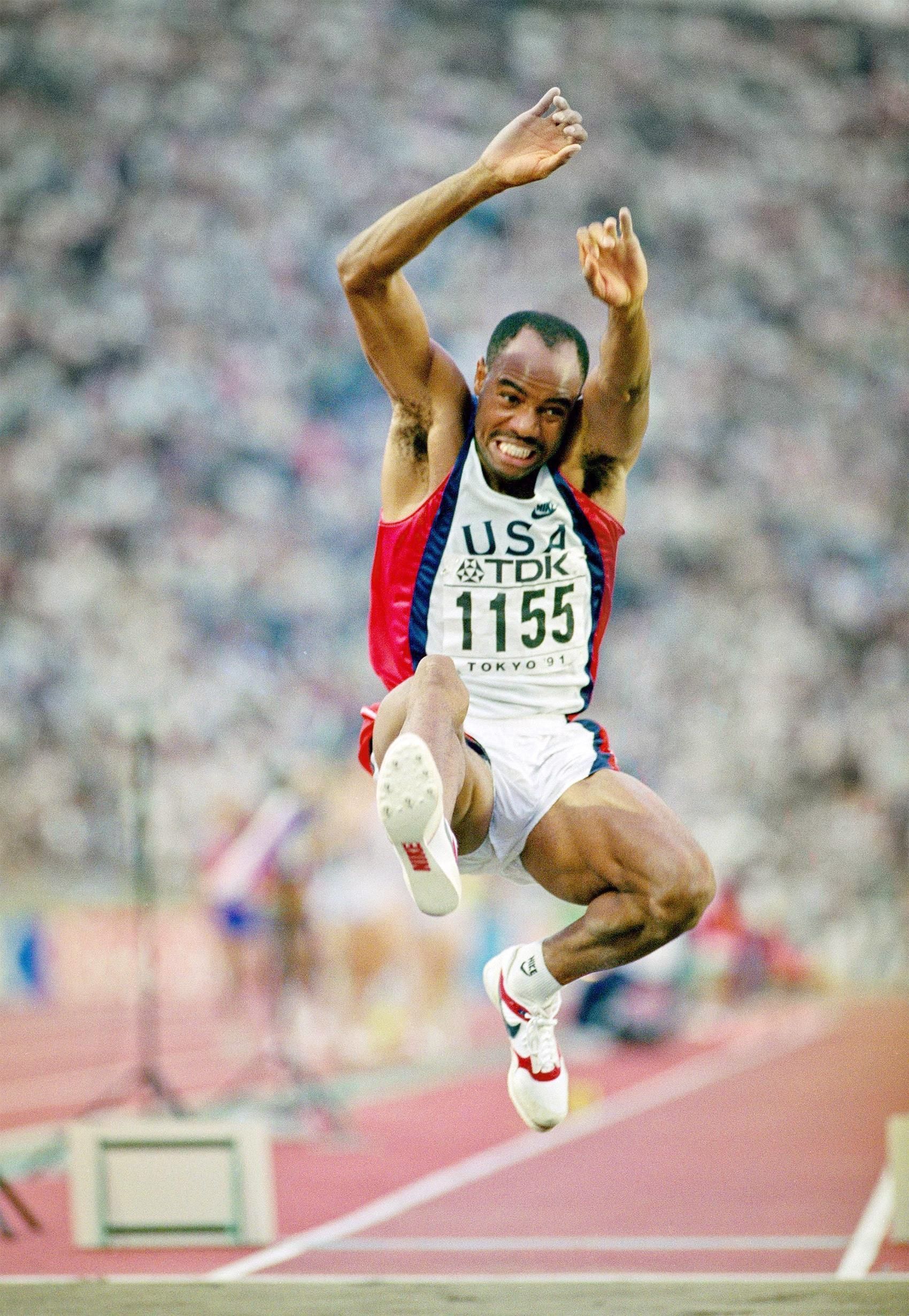 “It just felt good, I hit it with a really good jump, my approach wasn’t perfect but I got a chance to get a lot of good height. I just knew that I had jumped past him. I was just waiting for the measurement to come up, I was happy because I saw that the wind was 0.3m/s. It seemed like it took a long time for the mark to come up and the numbers came up slowly, one at a time. It was like eight point nine… five! I will never forget that. I was so, so happy running down the track.”

Lewis still had two jumps remaining, though. He came close with both, leaping 8.87m – a mark that remained his official lifetime best – and 8.84m, but it wasn’t enough to displace Powell as the winner and world record-holder.

Both men had surpassed Beamon’s long-standing record distance – one with legal wind, one without – and Powell had ended Lewis’s decade-long winning streak to win the world title.

“After Carl’s last jump, I had to make sure and at that moment I knew that I had beaten him, then I was so happy,” said Powell. “I just started running, I don’t know where I was running to.

“At the competition in New York earlier in the year when Carl beat me by one centimetre, he came down to congratulate me, put his arm around me and said that was a great competition. So after that last jump in Tokyo he came up to me and I put my arm around him and walked him down the track, saying ‘you’re a great competitor’.”

But for Powell, his record leap in Tokyo wasn’t simply a clutch response to a fellow opponent. It represented the perfect riposte to all the setbacks he had experienced up to that point. 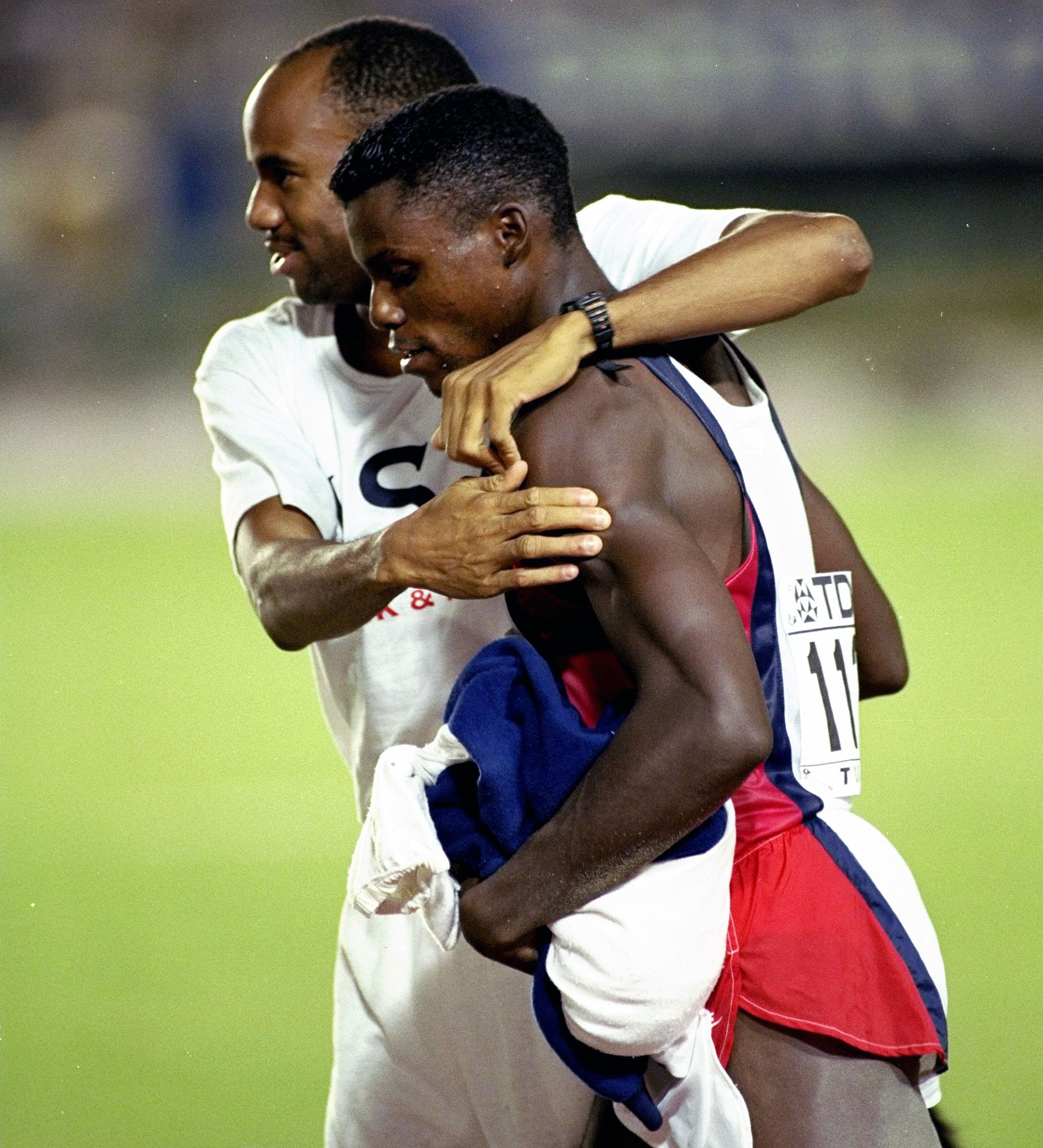 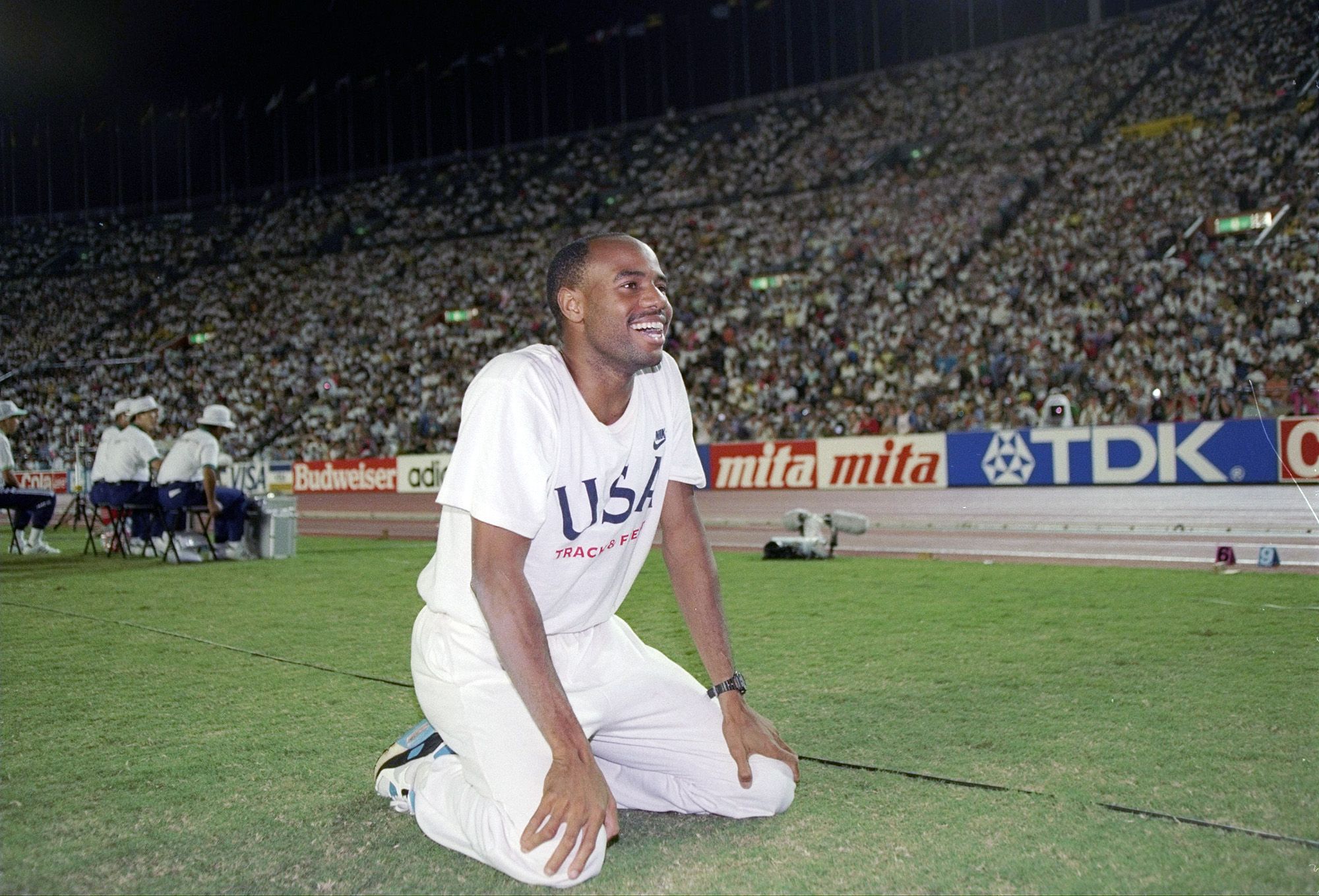 “For me, it was just a culmination of everything in my life that had gone wrong with me,” explained Powell. “For every time somebody called me a peanut head or any girl who had ever turned me down for a date or anybody who had ever doubted me, that jump was for them, just saying ‘take that’.

“It was way bigger than just a competition for me,” he added. “It was me letting people know that I’m making my stand and I’m making my mark now. It was much more than a jump for me; it was a turning point in my life.”