The rich kaleidoscope and global reach of the sport was amply illustrated on an action-packed final day of athletics at the Nanjing Olympic Sports Centre Stadium on Monday (25) as athletes from Europe, North and South America, Asia and Africa all struck gold medals.

For sheer drama, little could match the boys’ and girls’ 400m hurdles which provided very different, but, nonetheless, dramatic narratives.

The former event formed a thrilling climax to the morning session in which home favourite Xu Zhihang was given the verdict in a photo-finish from Tunisia’s Mohamed Jlassi.

In what was expected to prove a comfortable coronation for Xu, it proved anything but for the pre-race world youth leader as Jlassi, the sixth-fastest qualifier, gave the Chinese athlete an almighty fright. Entering the home straight, the pair were running stride for stride; the Tunisian out in lane eight and the Chinese athlete three lanes inside.

Coming off the final hurdle, Xu held a marginal advantage but Jlassi clawed his way back level before the pair dramatically lunged for the line. They were then forced to endure an agonising wait before it was confirmed Xu had clinched gold – despite both officially recording a world youth lead of 50.61.

The women’s version was just as memorable as South Africa’s Gezelle Magerman, who was down in fifth entering the home straight, blasted home to an emotional victory in a PB of 57.91, having chopped more than two seconds from her lifetime best in Nanjing.

Magerman’s pre-Games best was 60.10, but after smashing that mark with 58.57 to qualify fastest for the final, the 17-year-old then proved it was no freak performance with a dazzling run in the final to beat her nearest pursuer Michaela Peskova of the Slovak Republic by 0.35.

“The gold really means a lot,” said Magerman of her performance, which elevates her to third on the 2014 world youth list. “I will definitely keep the medal in a box in my room in a box and nobody touches it but me.”

Marshall, who entered the competition as world youth No.2, proved the strongest down the home stretch as the world youth leader Bacha Morka of Ethiopia had to settle for bronze.

The pre-event favourites and respective world youth leaders struck gold in the boys’ and girls’ 2000m steeplechase events. The women’s race was played out in a heavy downpour with world youth champion and world junior silver medallist Rosefline Chepngetich of Kenya making her decisive move off the final water jump to accelerate clear of Ethiopia’s Zewdinesh Mamo to win in 6:22.67.

In the men’s version, Wogene Sebsibe of Ethiopia made his gold medal-winning strike a little earlier to stretch clear and win in 5:38.42 from Kenya’s Amos Kirui, both of whom will be eligible to compete at the 2015 IAAF World Youth Championships in Colombia next July.

Earlier in the day, Sebsibe’s team-mate Kokebe Tesfaye backed up her status as the fastest athlete in the field by unleashing a storming last lap to ease to a comfortable victory in the girls’ 1500m final in 4:15.38 from Kenya’s Winfred Mbithe.

Tesfaye’s triumph partly erases her memories of the 2013 World Youth Championships when after winning her 800m heat in a PB, she was disqualified for a lane infringement in her semi-final, having crossed the line in second place.

In the field, the outstanding display was delivered by Hanna Tarasiuk in the girls’ javelin. Having led from her opening throw, her powerful last-round effort of 59.52m took her to the head of the 2014 world youth lists and slotted her into fourth on the all-time rankings with the relatively new 500g implement.

France enjoyed double gold in the field thanks to victories in the girls’ triple jump and boys’ javelin. In the latter event, 16-year-old Lukas Moutarde hurled the spear out to a lifetime best by almost two-and-a-half metres to deny Romania’s Alexandru Novac the gold with a 74.48m throw.

In the former, Yanis David leapt to the third-longest youth leap in the world this year of 13.33m to claim her place at the top of the podium.

Miguel Van Assen of Surinam made amends for a disappointing showing at the World Junior Championships when, troubled by a heel injury, he finished down in 11th. Here he struck gold in the boys’ triple jump with a best leap of 16.15m, just 18 centimetres shy of his own national senior record.

A second-time clearance and lifetime best of 5.10m was enough to deliver gold for Spain’s Noel-Aman Del Cerro Vilalta in the boys’ pole vault.

Today concluded the final day of athletics programme in the stadium, although tomorrow there will be one further set of medals awarded in the 8x100m mixed relay which takes place on a specially constructed track near the Olympic Village. The event will comprise four boys and four girls per team and will be run in a shuttle relay format. 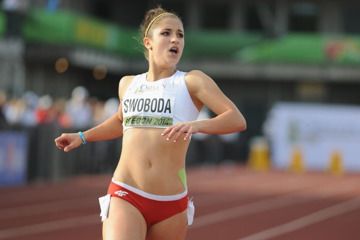 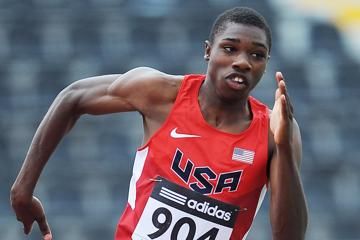 Lyles and Myles lead US resurgence at Youth O... 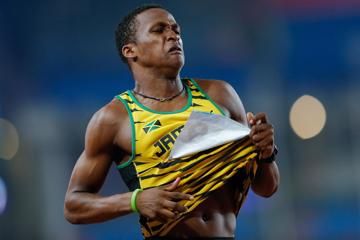 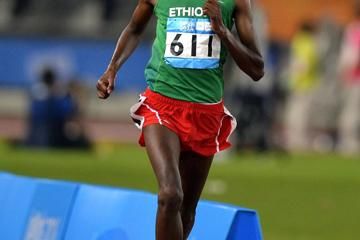