French sprint hurdler Sasha Zhoya, Irish sprinter Rhasidat Adeleke and Swedish jumper Maja Askag were among the star performers at the European U20 Championships in Tallinn, which concluded on Sunday (18) after four days of action.

Zhoya, an all-round talent who has produced incredible marks in the pole vault, 200m and decathlon in recent years, dominated the 110m hurdles. After breezing through his heat, he won his semifinal; in a marginally wind-assisted 12.98 (2.4m/s) – the fastest time ever recorded by an U20 athlete in any conditions.

He went on to comfortably win the final in a championship record of 13.05, just 0.03 shy of the PB he set earlier this month.

“Finally my first international medal,” he said. “I cannot wait for August to come for the World U20 Championships. I still have to work on some things but I have some time to correct it. I’m glad I managed to break the championship record of my compatriot, Wilhem Belocian, who is a good friend of mine. He also holds the world U20 record – and I want to break that too.”

Adeleke was similarly dominant in winning the 100m and 200m sprint double, going one better than her gold medal haul from the European U18 Championships three years ago. 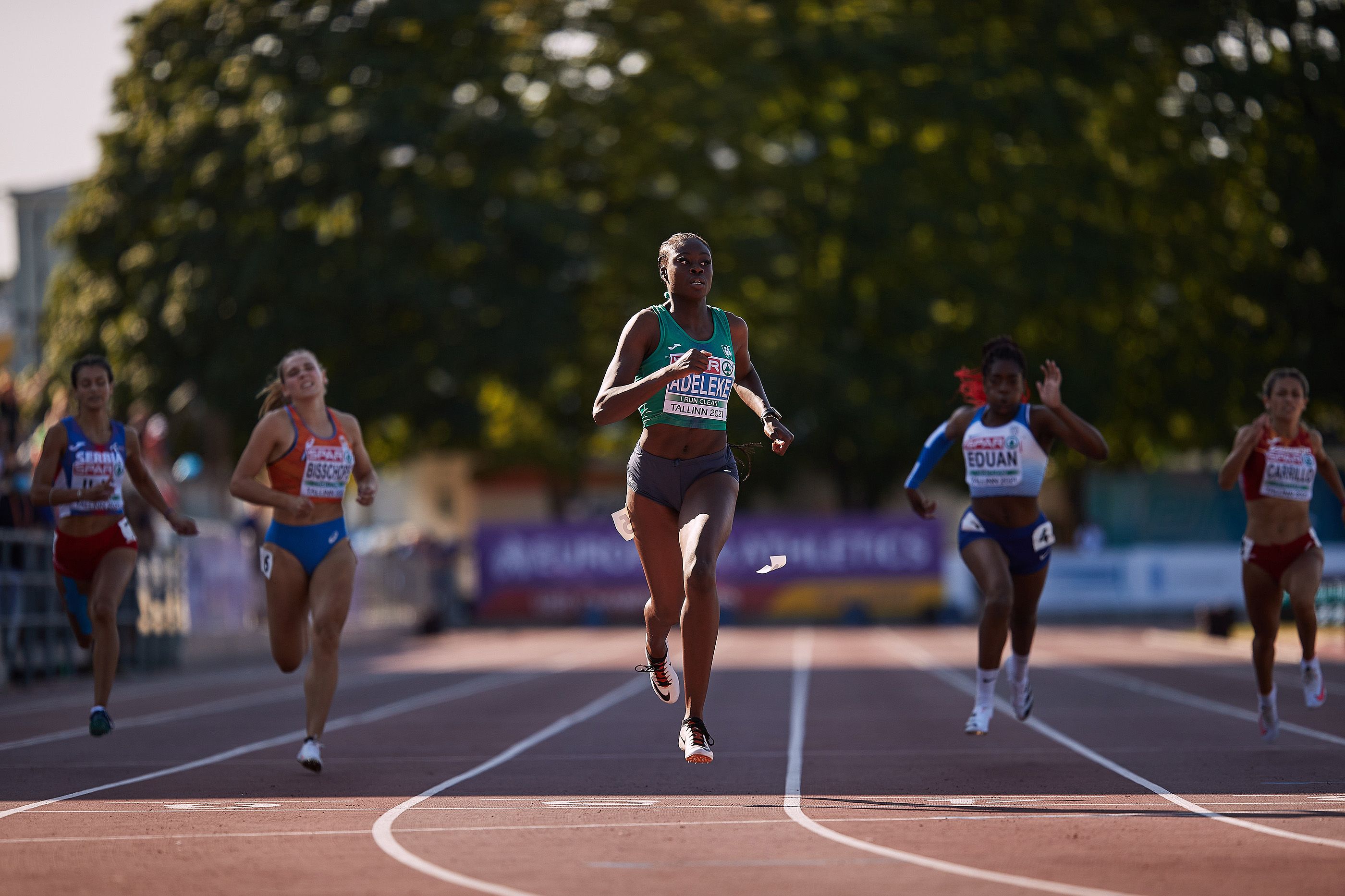 “When I decided to come here, I just told myself that since I am doing double, I need to win them both,” said Adeleke, who went on to run a 52.54 split in the 4x400m, helping Ireland to a fifth-place finish. “Now I’ve done it, it’s such a huge relief.”

Adeleke wasn’t the only double individual champion in Tallinn. Sweden’s Maja Askag produced the performances of her life to secure the horizontal jumps titles.

Ebosele held on to the silver while German duo Mikaelle Assani and Laura Raquel Muller battled for the bronze, Assani eventually taking it by one centimetre with her last-round leap of 6.62m. 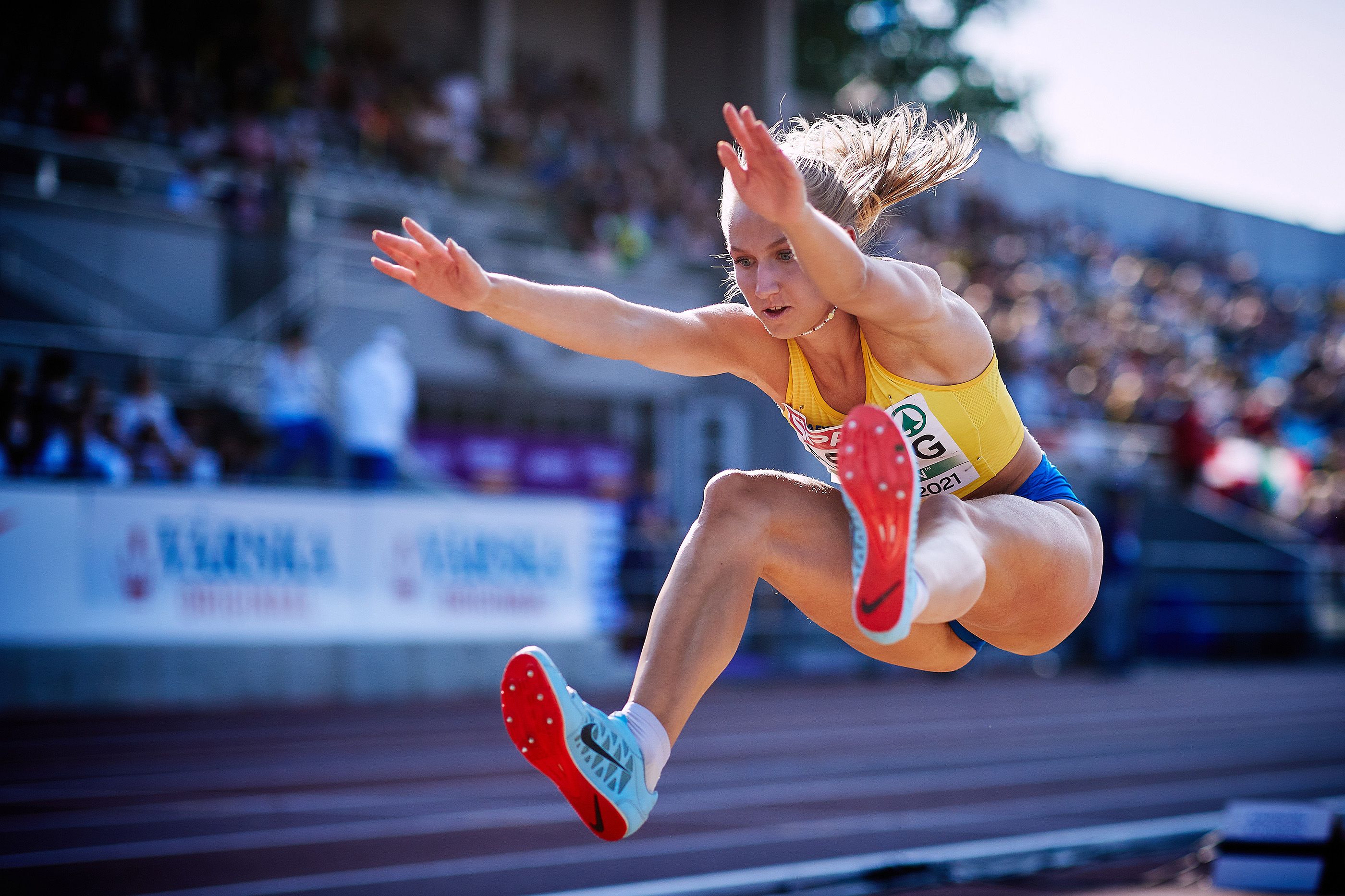 Aside from Zhoya, Silja Kosonen was the only other athlete to break a championship record.

British men won all of the flat sprint titles – individual and relays – contributing five of the six gold medals won by the table-topping nation.

Derek Kinlock completed Britain’s sweep of the men’s sprints, taking the 200m in a PB of 20.72.

Anthony Ammirati won the men’s pole vault with 5.64m, just one centimetre shy of the championship record set by Mondo Duplantis. Ammirati was pushed all the way by 17-year-old Matvei Volkov of Belarus, who cleared 5.44m for silver before taking attempts at 5.59m and 5.64m.

Elina Tzengko’s opening effort of 61.18m in the women’s javelin was enough to win gold, coming within 34 centimetres of the championship record. Serbian 17-year-old Adriana Vilagos also landed her spear beyond 60 metres, taking silver with 60.44m.

His winning mark may not have been a championship record, but shot put winner Muhamet Ramadani made history by becoming Kosovo’s first European champion in an athletics event, throwing a PB of 19.92.

Combined events winners Jente Hauttekeete and Saga Vanninen were among the many athletes to produce world-U20-leading performances to take gold.

Hauttekeete, who earlier this year set a world U20 indoor heptathlon record, won the decathlon with a Belgian U20 record of 8150. He took the lead after the shot put (15.31m) and never relinquished it, despite a sustained challenge from Norway’s Sander Skotheim, who took silver with a PB of 8012.