Damion Thomas’s world U20 record-equalling* run in the 110m hurdles on Saturday (23) was the highlight of the four-day Jamaican Junior Championships, which concluded in Kingston on Sunday (24).

The fair-sized crowd at the national stadium cheered when the winning time of 12.99 (0.3m/s) flashed up on the scoreboard. He now joins Frenchman Wilhem Belocian as the only U20 athletes to better the 13-second barrier for the 110m hurdles (99cm height).

“All year I’ve been doing college hurdles at 42 inches so to come back down to 39 inches was way easier for me,” said the Louisianna State University student who has clocked 13.44 over the senior height barriers this year.

“The record is something I had my eyes on since I started hurdling. I remember sitting at home watching the French guy break the record and for me to equal it before the World Juniors is a happy moment for me.

“Execution is important,” he added. “At the last World (U20) Championships I was one of the favourites going in, but I hit a hurdle and fell in the semi-finals. This year I’m going there as the favourite again; I just have to execute well and if I do that I know I’ll come out with the victory.”

Orlando Bennett almost pulled off an upset on Saturday, though. After getting a strong start, he led all the way through until Thomas caught him at the tape. Bennett improved his lifetime best to 13.00, making him the third fastest junior ever.

World U18 champion Dejour Russell, who had clocked a PB of 13.10 earlier this year, had to settle for third place in 13.26. It means he will miss out on making the team for the IAAF World U20 Championships Tampere 2018.

He wasn’t the only unforeseen sprint hurdles casualty of the championships. Rovane Williams, the fastest U20 Jamaican this season in the 400m hurdles, saw his dreams vanish in 50 seconds.

Running out of lane four, Williams was unable to peg back arch-rival Malik James-King and Leonardo Ledgister who surprised the field after building up a sizeable lead coming off the top bend. Ledgister was still in front when he cleared the final barrier before the fast-finishing James-King overtook him to take the win, 50.23 to 50.31. Williams finished a distant third in 51.04.

“This was a very important win for me,” said James-King. “Coming in, I didn’t know what to expect because my form has been up and down this season.”

World U18 silver medallist Sanique Walker took the women’s equivalent in 58.37. The race was missing Carifta champion and world U20 No.3 Shiann Salmon as she competed a day earlier against the seniors where she placed seventh in 56.61.

Carifta champion Amoi Brown continued her unbeaten season in the 100m hurdles and revised her personal best to 13.09 (0.9m/s). World U18 champion Britany Anderson was second in a season’s best of 13.19.

“Preparing for the World U18 Championships wasn’t this hard but I’m planning to run sub-13 by the time I get to Finland,” said Anderson.

“My freshman season has been great, so I had a lot of confidence coming here,” said Sawyers, who attends the University of Florida. “The competition was great and I just embrace the moment of competing against these guys.”

Instead of contesting the U20 long jump, 17-year-old Wayne Pinnock lined up for the senior event at the Jamaican Championships. He finished a respectable third with 7.96m, just three centimetres shy of the PB he set earlier this year.

“It was a good feeling competing against these guys and finishing third,” said Pinnock, who is fourth on this year’s world U20 list. “I just need to fix a few things and work on my landing before going to the World U20 Championships.”

BACK
Pages related to this articleAthletes
Damion THOMAS 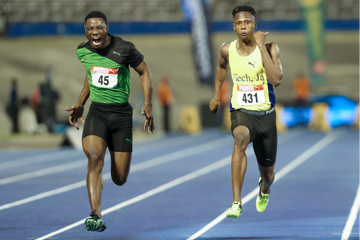