USA steals the show on climactic final day in Bydgoszcz

After six thrilling days of action, perhaps this was the only appropriate climax.

In the final race on the final day of the IAAF World U20 Championships Bydgoszcz 2016, it was the USA – yet again – who reigned supreme.

Despite the strength of the Botswanan quartet in the men’s 4x400m, there always seemed a certain inevitability about the destination of the gold medal, and so it proved.

Ten times already this week, the sound of The Star-Spangled Banner had rung out around the stadium, heralding another gold medal for USA, and as the athletes set off for the final leg of the 4x400m, their anchor man Wilbert London III seemed desperate for an encore.

He faced a 10-metre deficit, but closed the gap gradually over the first 300 metres, slowly reeling in Botswana’s Xholani Talane before powering on by with 50 metres to run. As he did so, a horde of his teammates beside the finish erupted into chants of U-S-A.

That race, in essence, was the story of the week in Bydgoszcz, where the USA didn’t just top the medal table; they virtually monopolised it.

They took 11 gold medals, more than twice that of their closest competitor, Kenya, who took five. Their overall medal tally of 21 was also more than double their nearest rivals, Ethiopia.

The women’s 4x400m proved another example of their dominance, the expected challenge of Jamaica disintegrating on the third leg as Stacey-Ann Williams gifted the US an insurmountable lead by running the entire leg in lane two. Despite the best efforts of individual bronze medallist Junelle Bromfeld on Jamaica's anchor leg, USA held on, with 800m champion Samantha Watson bringing them home in 3:29.11.

As is so often the case in major championship finals, it was the athlete who kept her head best who prevailed in the women’s 100m hurdles. In what proved an incredibly tight affair – just 0.08 covered the first four – Elvira Herman of Belarus clocked a European U20 and championship record of 12.85 to take gold.

European U20 champion last year, world U20 champion this year – you could forgive Herman for finally losing her composure when the result was confirmed. “I’m in a state of total euphoria,” she said. “I set a PB, national record and championship record. You can’t find emotion like this anywhere else.”

The fall and rise

With 550m to run in the men’s 3000m steeplechase final, the medal contenders had been whittled to four: Kenya’s Amos Kirui and Vincent Kipyegon Ruto, Eritrea’s Yemane Haileselassie and Ethiopia’s Getnet Wale.

Moments later, disaster struck for Wale, the Ethiopian crashing to the track after stumbling upon landing in the water pit. As Kirui and Ruto pushed the pace along at the front, Wale spent the ensuing 400 metres fighting his way back into medal contention, which he accomplished as he approached the final water jump in third place.

And then it happened again.

In an almost identical fall, Wale crashed to the track emerging from the water, but rose to his feet just as fast, somehow summoning the energy within him to continue on his medal hunt.

Up front, Kirui surged clear to win in 8:20.43, while Haileselassie found an extra gear to take silver in 8:22.67. Ruto, meanwhile, faded badly in the home straight and was chased down by Wale, who with a dogged effort lunged forward over the line, crashing to the track for the third time in a little over a minute to snatch bronze by 0.01 in 8:22.83.

Wale may be left with an array of bumps and bruises when he departs Bydgoszcz in the morning, but in his carry-on luggage he will have the ideal painkiller: a hard-fought medal for his country.

With the wind gusting strongly around the stadium for the men’s 800m final, many would have considered a conservative strategy – drafting off rivals until the business end of the race – the most sensible approach for a title contender. Not Kipyegon Bett.

The Kenyan swept to the lead as the eight athletes broke lanes in the back straight, passing 400m in 52.98. His teammate Willy Tarbei, who defeated Bett at the IAAF World Youth Championships in Cali last year, was poised on his shoulder, appearing ready to strike.

This time, though, Bett was not for passing and he accelerated away off the final bend to win in 1:44.95, with Tarbei a close second in 1:45.50. “I expected to win,” said Bett. “My only problem was the finishing kick, but I worked hard on that this year.”

Kenya’s arch rivals gained some revenge in the women’s 1500m, with Ethiopia taking gold and silver medals. Adanech Anbesa led the field home in 4:08.07 ahead of Fantu Worku, with the relatively unheralded US runner Christina Aragon charging through to take bronze in a PB of 4:08.71.

World U18 champion Michaela Hruba was widely expected to take the women’s high jump title in Bydgoszcz, but the weight of expectation can often prove a hefty burden. If the 18-year-old felt the pressure, it certainly didn’t show, as she sailed over 1.74m, 1.79m, 1.83m, 1.86m and 1.89m at the first time of asking.

That gave her complete control of the competition, with only Mexico’s Ximena Lizbeth Esquivel able to join her at the deciding height of 1.91m. After a first-time failure, Hruba soon made the necessary adjustment and sailed clear.

Try as she might, Esquivel couldn’t match her, and Hruba maintained her winning ways. “Everything was perfect,” she said afterwards. It was hard to disagree.

The 17-year-old had only been considered an outside medal chance before the event, and very few envisioned him taking gold. With this title under his belt, however, he is now planning more of the same in the coming years.

“I can’t even describe the feeling right now,” said Moaaz, who left his senior rivals with a noteworthy prediction. “Next year I will surprise you.”

BACK
Pages related to this articleAthletes
Elvira HERMAN 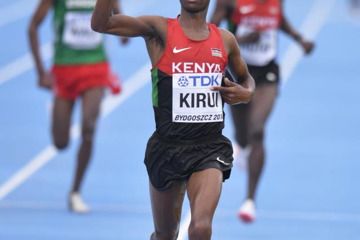 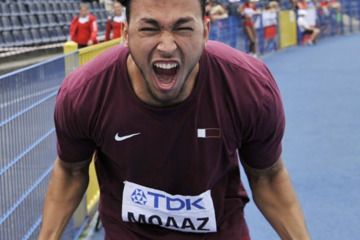 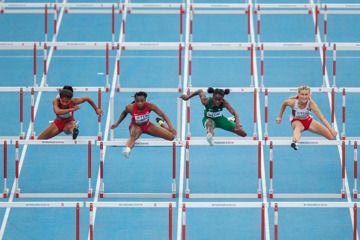 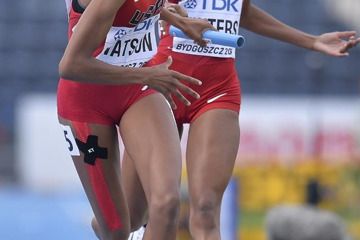