Taylor bound for Bydgoszcz after 400m success in Kingston

Christopher Taylor booked his ticket to IAAF World U20 Championships Bydgoszcz 2016 with a workmanlike victory in the men’s 400m at the Jamaica Junior Championships in Kingston, which came to a close on Sunday (19).

The 16-year-old world U18 champion got off to a relatively good start and had sliced his way through the field by the time the runners reached the 250-metre mark.

However Sean Bailey was not in the mood to throw in the towel and began to rush forward around the final turn, with the race developing into a stride-for-stride affair in the home straight, but Taylor showed his class with 50 metres to go and sped away to clinch victory in 46.26 ahead of Bailey's 46.51.

The event was loaded with quality, featuring the third-ranked U20 in the world in Thomas (best of 13.42 over the 99cm barriers), the fifth-ranked in Rohan Cole (13.48), along with Jamaica’s high school champion Dejour Russell.

After a nervy faulty start, the race got underway with the fleet-footed Cole surging into the lead. However, Thomas soon began to claw his way back into the contest with the powerfully built Russell to his right also closing fast.

By the sixth hurdle, the trio had separated themselves from the field, but it was Thomas who shifted gears best and moved away for an impressive victory in 13.50. Russell was second in a personal best of 13.55, despite the headwind, and Cole took third in 13.64.

“I was happy I got a chance to race these guys,” said Thomas. “It’s something I’ve been wanting for the past month. It feels great to know I can beat boys who are two and three years my senior, knowing I have another chance at world juniors in 2018.”

On Saturday the men’s 100m produced one of the biggest shocks courtesy of some drama in the blocks.

World number two ranked U20 sprinter Nigel Ellis suffered the embarrassment of a false start in the heats. “At first I couldn’t believe it but I had to," said Ellis ruefully.

Ellis is the only Jamaican junior sprinter to have run below 10.20 this season, which he has done twice, both times clocking 10.16.

After his departure, Raheem Chambers became the race favourite and he capitalised on the opportunity, running away as a comfortable winner in 10.70 with his main concern being a stiff breeze in his face. He was chased home by the late-surging Jhevaughn Matherson, who ran 10.77, while Fabian Hewitt clocked 10.80 for third place.

In the men's 400m hurdles, reigning world U20 champion Jaheel Hyde ticked off one of his main priorities this season which was to defend his national title. Hyde came into the championships with the world-leading time of 49.16 and cruised to an easy victory in 51.47.

In the women’s 400m, Tiffany James ran a personal best of 52.06 to upstage race favourite Junelle Bromfield, who came in as the world number two ranked U20 400m runner.

Bromfield still stopped the clock at 52.59 but paid the price for a laid-back approach, allowing the front-running James to build up an insurmountable lead.

The major upsets were not restricted to the sprints. Warren Barrett, the world number five-ranked U20 shot putter, came into the championships with a best of 19.97m but found himself in unfamiliar territory when he was beaten in his favoured event.

The men responsible were Sanjae Lawrence, whose winning effort 19.45m was a personal best, and runner-up Kevin Nedrick, who also threw a personal best with 19.18m. Barrett had to settle for third with 19.09m.

Another upset occurred in the men’s triple jump, where the negative wind that affected the sprinters assisted a few jumpers going in the opposite direction.

Ellis redeems himself over 200m

The men’s 200m was the final event of the evening and it offered Nigel Ellis a shot at redemption. He came face-to-face with Akeem Bloomfield, the national junior record holder in the 400m (44.93), who also has a PB of 20.66 in the 200m.

At the crack of the pistol, the long-striding Bloomfield was gone in a flash. However, Ellis ran an efficient curve and found himself level alongside Bloomfield as they entered the home straight together.

Ellis’ tenacious spirit was on full display and proved to be the deciding factor as he powered away from a stunned Bloomfield to win by over a half-a- second in 20.72 (-3.2m/s). Bloomfield came home in 21.06, followed by Hujaye Cornwall in 21.30.

"The better man won today," said Bloomfield. "My coach and I have to go back to the drawing board and start over.”

BACK
Pages related to this articleAthletes
Tiffany JAMES 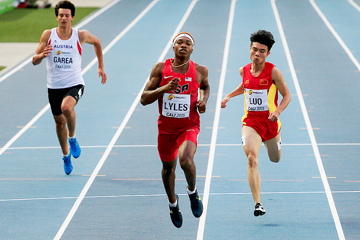 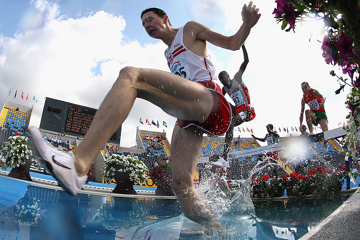 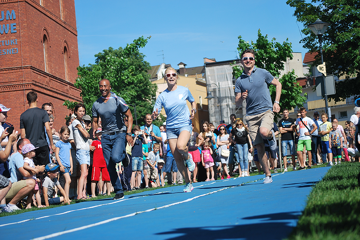 Ambassadors warm up for IAAF World U20 Champi... 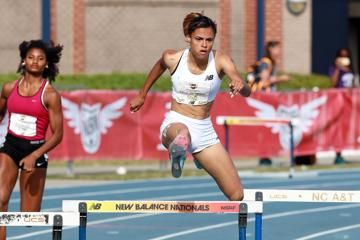