Little no longer a diminutive figure in the world of hurdling

The cry of jubilation Shamier Little let loose on crossing the finish line in the women’s 400m hurdles might have been one of relief.

Her 55.66 victory gave her the fifth-fastest junior mark of the year: Little now owns four of those five, all run here at Hayward Field.

“To go 55 seconds, and this being my third time doing it (in finals), it's great,” said Little after the race. “I didn't know what my time would be but it felt great. Most hurdlers get out fast. I do, too, but it's a different kind of fast.”

Little’s race was under control through to the seventh hurdle, when she visibly pulled away from the field and escaped to the win.

“I don't like to run off of anybody,” Little explained. “I got to about 150m [to go] when I felt I had it. My coach was screaming around the ninth or 10th hurdle. I was just focusing on getting my feet down and getting my trail leg over.”

It was Little’s second time in a World Junior Championships 400m hurdles final. In Barcelona, poised to pick up a medal, Little tumbled to the track over the last hurdle and did not finish. She had entered that meeting with the third-fastest junior mark in the world and a reasonable hope of a medal; she left with only motivation to do better next time.

In 2013, Little clocked 58.80 over high school barriers at the Penn Relays. A Chicago native, Little’s Illinois state federation contests 300m hurdles rather than 400m hurdles, so she had little opportunity to contest the longer race. She returned with a vengeance as a Texas A&M first-year student in 2014.

Between her collegiate campaign, which culminated in an NCAA title at the same Hayward Field track which hosted the US Junior Championships and the World Juniors, Little has run faster than 56 seconds a total of five times in 2014, four of them at Hayward Field. Seven of the top 10 junior times in 2014 also belong to Little.

The 55.07 she ran in June to take the NCAA title makes her the second-fastest US junior ever, behind only Lashinda Demus, the 2002 world junior champion and 2011 world champion.

After that, the US junior title was almost a formality for Little on the way to the World Juniors.

Little’s mother often travels to see her daughter compete. A good basketball player at Eastern Tennessee University, Little’s mother cleared 1.72m in the high jump. She steered Little into athletics at the age of eight and encouraged her to run the long hurdles, even though Little still says: “I didn’t like the 400m, why would I like the hurdles?”

Little’s mother selected the stars-and-stripes hair bow she wore in the World Junior Championships final and was yelling excitedly from high in the stands halfway down the home straight on Saturday.

“My mom probably has the scrapbook for this year all planned out,” said Little. “It'll go in there and then I'll find a new bow for the next competition.”

She cites Queen Harrison, who ran the 100m hurdles at the 2013 IAAF World Championships but the 400m hurdles in 2011 and at the London 2012 Olympic Games, as her athletics inspiration, and the two occasionally correspond on Twitter.

The obvious parallels, though, are with Demus, the 2011 world champion in the 400m hurdles.

Demus’ winning time at the 2002 World Junior Championships was a world junior record at the time, 54.70, and the championship came after Demus won an NCAA title as a first-year student at the University of South Carolina.

Her course from World Juniors to a senior championship was far from straight; to make the 2008 US Olympic team she had to run in the Trials barely a year after her twin sons were born.

The 400m hurdles is an event where most juniors need several years of additional development to make an impact at the senior level, and Demus’s experience shows that Little, whose journey at the 400m distance has barely begun, has a clear course to follow.

BACK
Pages related to this articleAthletes
Shamier LITTLE 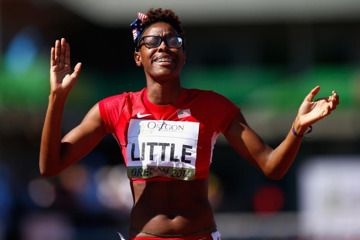