The competition at the Silesian Stadium in Chorzow held extra importance, with qualification for the Tokyo Olympic Games and World Athletics Championships Oregon22 up for grabs. With those major championships places decided on Saturday, teams were left to cap their weekend with success in the all-final day two programme.

The mixed 4x400m was up first and the Italian quartet of Edoardo Scotti, Giancarla Trevisan, Alice Mangione and Davide Re – fastest in the heats – again ran four well judged legs to take victory in 3:16.60, ahead of a fierce battle for the line between Brazil, the Dominican Republic and Belgium.

It was the perfect way for the Italian team to end their weekend as after a ninth-place finish at the World Athletics Championships Doha 2019, where the eight finalists gained Tokyo qualification, a top eight place for them in Silesia was crucial to book that Olympic Games spot. And once in the final, they made it count.

All eight teams decided to go with the man-woman-woman-man format and Anderson Freitas Henriques started strongly for Brazil, as did Scotti for Italy and he had a narrow lead at the first changeover.

Britain’s Zoey Clark pushed ahead as she received the baton and was in front at the break ahead of Brazil. But Trevisan, who was part of Italy’s third-placed women’s 4x400m team at the last edition of the World Athletics Relays in Yokohama in 2019, saved herself for the latter stages and came through to hand over a couple of metres ahead of Brazil and Great Britain.

Italy’s advantage only continued to grow as Mangione took over for the third leg, handing over to Re who couldn’t be caught.

"We did not feel like clear favorites because we expected strong teams like the Netherlands," said Re. "But we saw they changed the squad a bit so it was more possible to beat them today. We will celebrate our victory."

Second place was decided by a dip as Brazil’s Pan American Games 400m hurdles champion Alison dos Santos, fifth with 200m to go, ran a 44.62 split and launched himself over the line in 3:17.54 to pip Dominican Republic’s Alexander Ogando by just 0.04.

Netherlands save best for last

The Dutch men’s 4x400m team was another to have secured Olympic qualification in Silesia and they too topped a busy weekend with victory, winning the final event of the evening in 3:03.45. 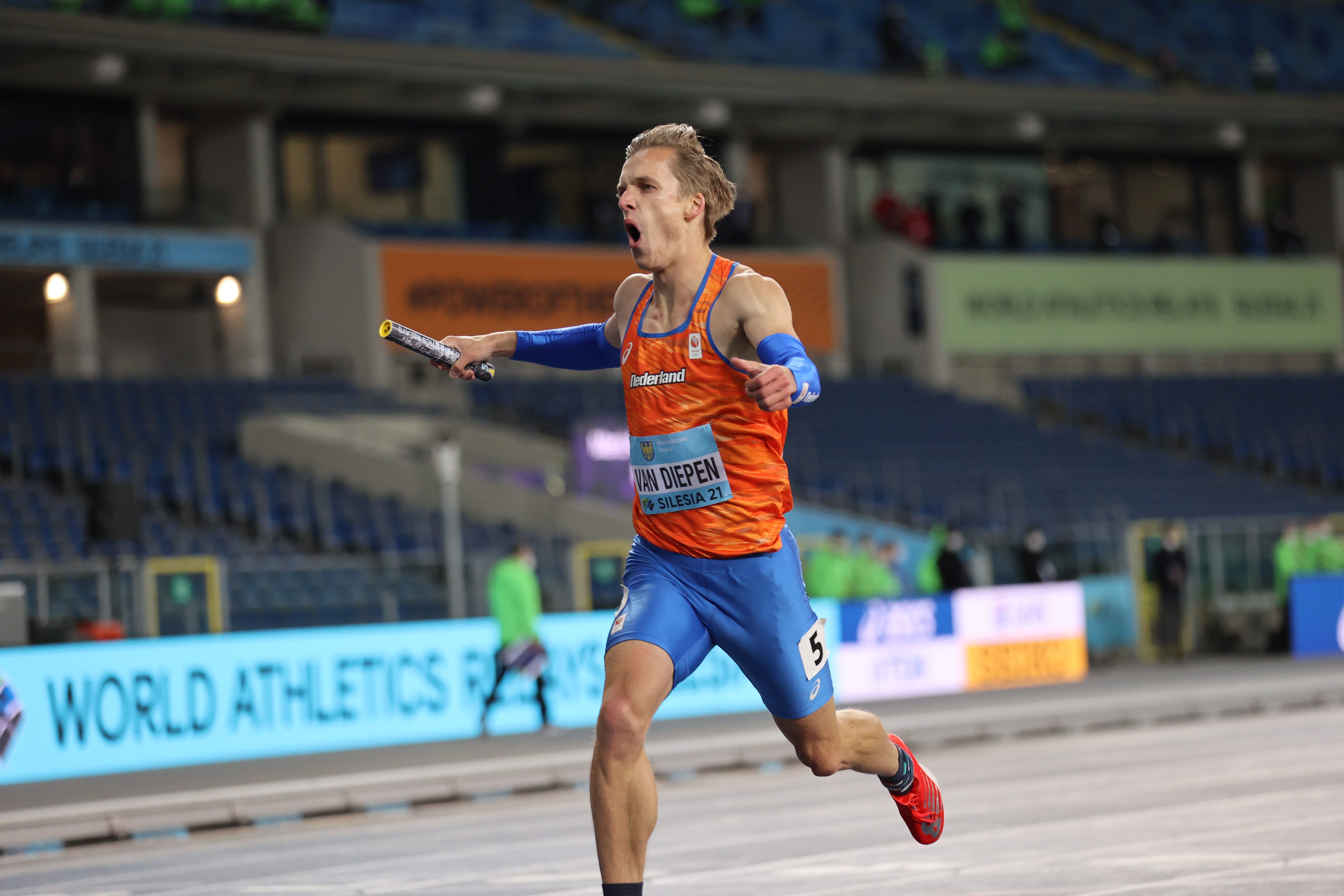 Jochem Dobber started fast for the Netherlands, as did 18-year-old Lythe Pillay for South Africa and Commonwealth 400m champion Isaac Makwala for Botswana, and South Africa were just ahead at the first changeover. Those teams all remained in the top three, with Liemarvin Bonevacia running leg two for the Netherlands, but strong second and third legs by Japan’s Kaito Kawabata (45.44) and Kentaro Sato (45.72) were significant, with the team moving up into second place.

The final leg saw South Africa’s Oscar Mavundla storm the first 150m but then he began to fade with Tony van Diepen, who had received the baton from Ramsey Angela, surging past to anchor his team home ahead of Japan and Botswana, with respective times of 3:04.45 and 3:04.77.

France were seventh and Belgium eighth.

Just 19 months after finishing a distant sixth in their heat at the World Athletics Championships Doha 2019, Cuba showed much improved form to win the women’s 4x400m in Silesia.

With a well-timed effort, Cuba’s quartet moved from third to second and then to first on the last three legs to win in 3:28.41, overtaking Poland and Great Britain while also holding off the Netherlands. 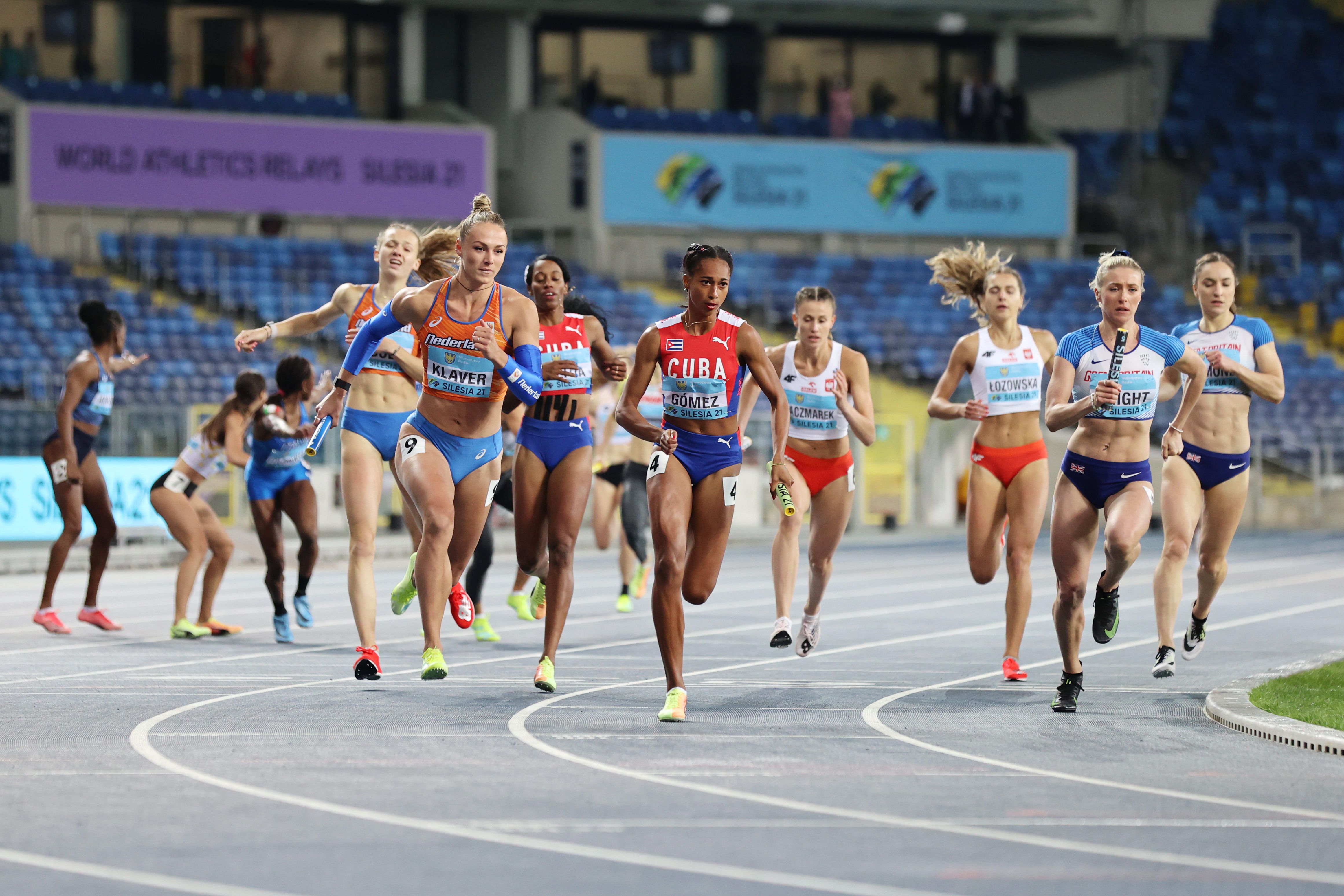 Britain’s Laviai Nielsen gave Britain an early lead, which was then maintained by Ama Pipi on the second leg. Malgorzata Holub-Kowalik kept Poland in contention with Cuba close behind.

A 50.58 split from Femke Bol – the fastest of the race – gave the Netherlands a brief lead, but Britain’s Jessie Knight, Poland’s Natalia Kaczmarek and Cuba’s Roxana Gomez were right behind.

“It was extremely tough, but I did my best to hand over the baton as smoothly as possible,” said Cuba’s first-leg runner Zurian Hechavarria. “This is the biggest achievement in my career.”

There was drama in the women’s 4x100m as the Netherlands, who had dominated the first round and had a similarly strong team contesting the final, struggled with the final changeover, leaving the way clear for Italy to join their mixed 4x400m teammates in triumph. 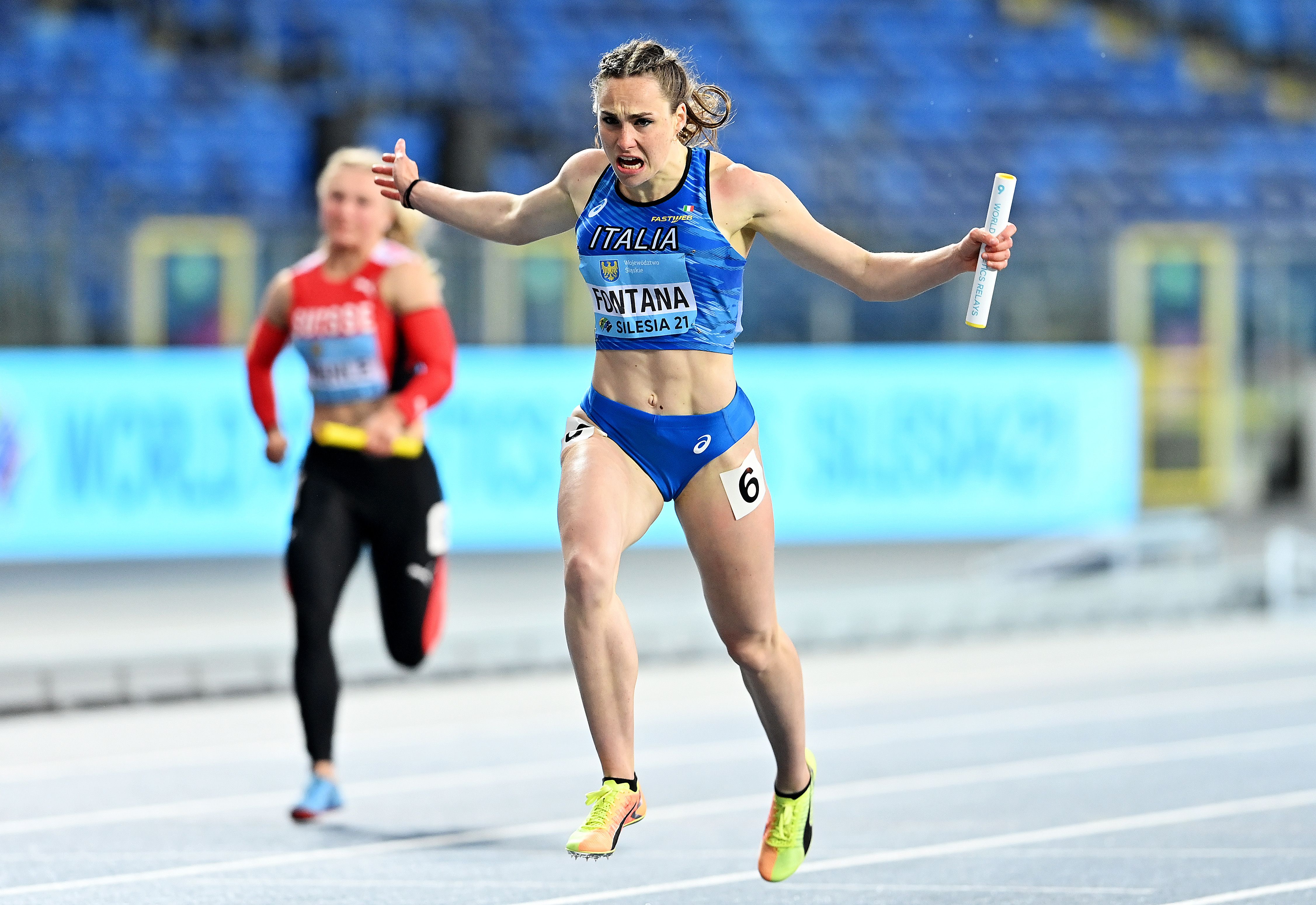 Jamile Samuel had gone off fast and the Dutch team were in front, ahead of Ecuador and Japan, at the first changeover. Two-time world 200m champion Dafne Schippers safely handed over to Nadine Visser as the Netherlands remained to the fore, but Visser couldn’t catch her teammate Naomi Sedney which resulted in a loss of momentum, as Sedney had to stop to receive the baton.

A solid series of changeovers, from Irene Siragusa to Gloria Hooper and then Anna Bongiorni, left it down to Vittoria Fontana to bring the Italian team home and with a safe final handover she moved past the Dutch team to win in 43.79.

"I am speechless," said Hooper. "It is amazing, it is like a dream. We were not expecting it. Now we are going for the final in Tokyo."

Japan finished fourth in 44.40 as Ecuador capped a historic weekend by finishing fifth, with their performance to make the final in Silesia qualifying them for Tokyo where they will be the first Ecuadorean relay team ever to compete at the Olympics.

Denmark secured sixth and will race in the Olympic women’s 4x100m for the first time since 1948 as France also struggled with the final handover and did not finish. The Swiss squad was disqualified.

For the best part of 38 seconds, it looked as though Brazil would repeat their World Relays 4x100m victory from 2019. 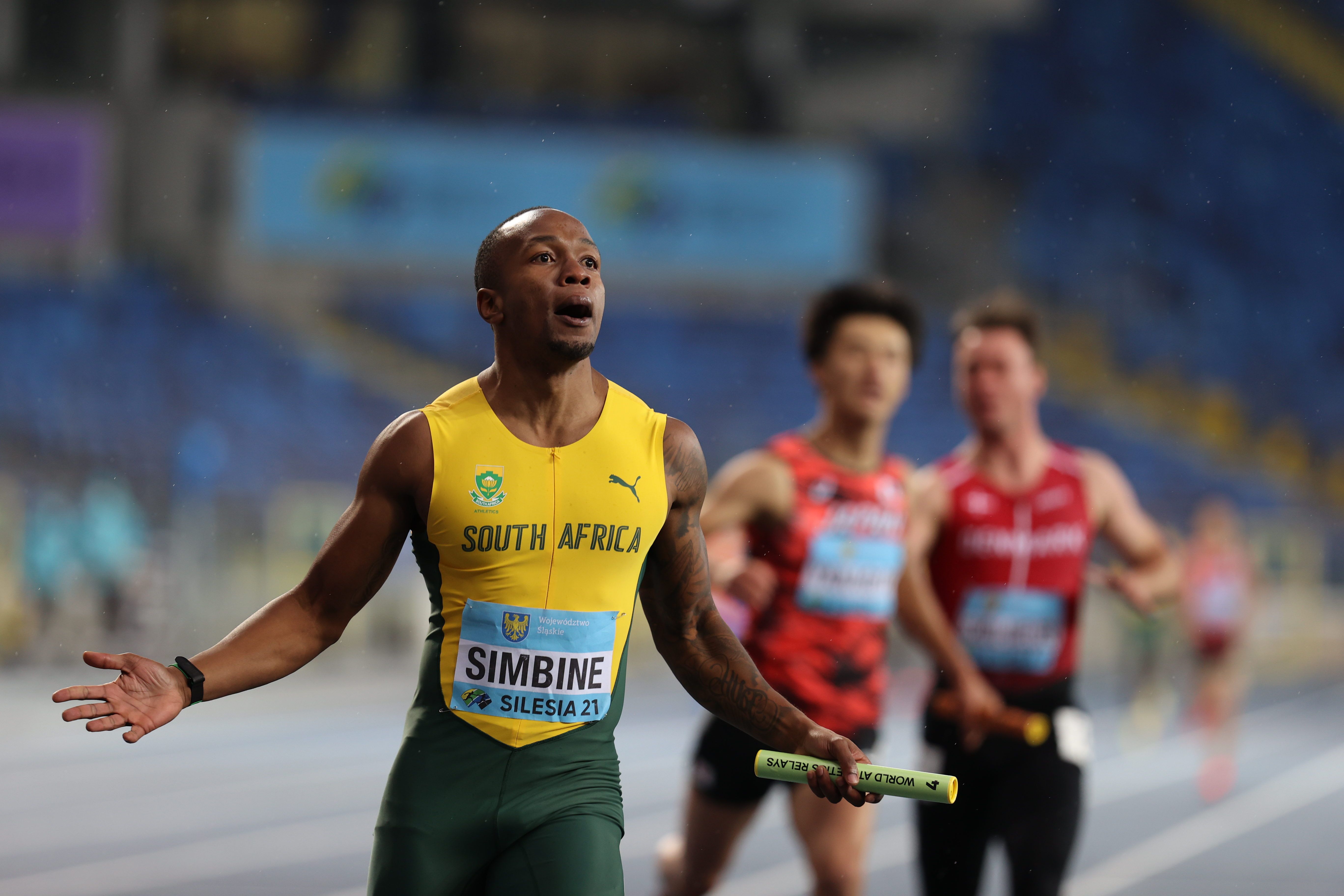 Rodrigo Do Nascimento got Brazil off to a strong start, but European indoor 60m champion Marcell Jacobs ran Italy into contention with a storming 8.91 leg on the back straight. Tlotliso Leotlela and Clarence Munyai ran strong second and third legs respectively for South Africa, but they trailed Brazil as they approached the final changeover.

Paulo Andre Camilo de Oliveira received the baton with a lead of about a metre from South Africa. For most of the home straight it seemed as though Brazil would maintain their lead, but Simbine powered home and caught his Brazilian rival just before the line, winning in 38.71.

It was quite the turnaround for South Africa, who failed to qualify a team for the 2016 Olympics and 2017 World Championships.

“Last time we didn't even make the final, so this victory means a lot to us,” said Leotlela. “Our trip from South Africa was difficult, but we recovered well. This competition is very important for us as preparation for the Olympics. It's a way to test yourself on the big stage.”

Brazil crossed the line just 0.01 behind but the team was later disqualified for a lane infringement on the second bend.

Germany’s Michael Pohl pulled up towards the end of the first leg, so the team was unable to finish. The Netherlands, meanwhile, fumbled their final exchange and were also non-finishers. Ghana was disqualified for passing the baton outside the takeover zone on the second exchange.

Following the drama in the 4x100m finals, it was something of a relief that the women’s 4x200m was relatively uneventful and went pretty much to the form book.

Poland’s Paulina Guzowska gave the hosts an early lead from Ireland, then Kamila Ciba maintained their position on the second leg. A 23.34 effort from Klaudia Adamek – the fastest of the race – extended Poland’s lead to 0.6 over Ireland with Ecuador a similar distance behind in third.

Marlena Gola pulled clear of Ireland’s Sophie Becker on the last leg to bring Poland home in a national record of 1:34.98. Ireland held on for second place in 1:35.93, also a national record. Ecuador placed third in 1:36.86.

The same could not be said for the men’s 4x200m, which saw dropped batons by both Denmark and Poland, but there was a dominant run by Germany as Owen Ansah ran a 19.96 last leg to anchor his team to victory in 1:22.43. 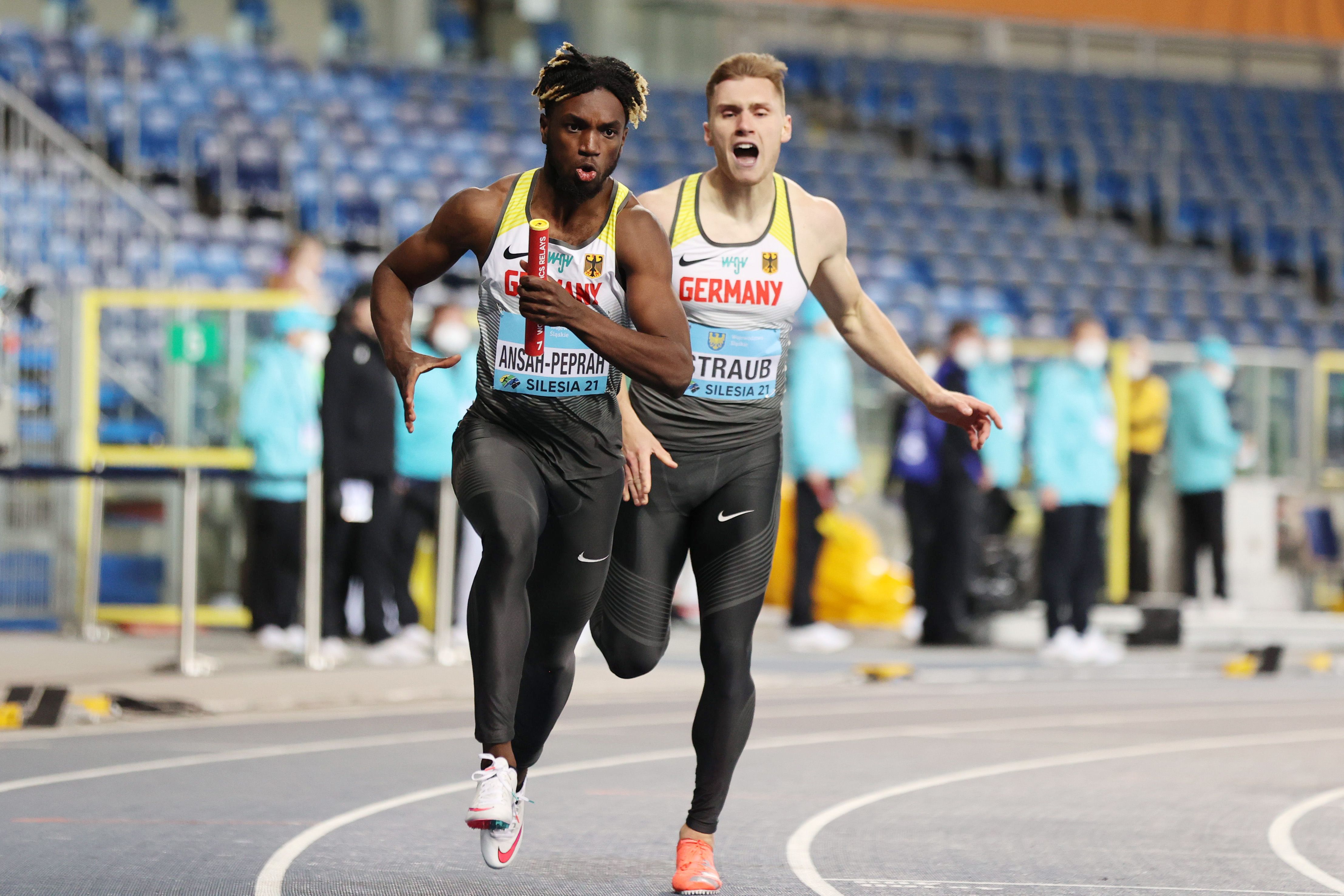 It was a different quartet to that which placed third in Yokohama and here Ansah was joined by Steven Muller, Felix Straub and Lucas Ansah-Peprah.

Kenya also improved this time around, securing their best ever finish at this event with 1:24.26 for second place, the team anchored by Hesborn Ochieng.

Just behind them, Portugal – making their debut in this discipline – clocked 1:24.53 for third and Ecuador a national record 1:24.89 for fourth.