LaShawn Merritt anchors the USA to victory in the 4x400m at the IAAF/BTC World Relays, Bahamas 2015 (© Getty Images)

David Verburg, part of the USA 4x400m team that won at the 2014 IAAF World Indoor Championships in a world indoor record time, gave the USA the lead after the opening leg, followed closely by Belgium and Jamaica, and they were only once briefly headed during the next three laps.

Tony McQuay ran a dominating 44.00 second leg – the equal fastest individual leg of the final only matched by Jamaica's hugely promising Javon Francis – as one might be expected from a runner who took the silver medal at the 2013 IAAF World Championships. He then handed over to 2004 Olympic champion Jeremy Wariner 10 metres in the lead as The Bahamas moved up to second.

Steven Gardiner closed and briefly overtook Wariner at the halfway point on their leg to send the crowd crazy in the Thomas A Robinson National Stadium. But their delight was short-lived as Wariner used all his experience derived from his position as the world’s No.1 400m runner a decade ago to edge back in front.

LaShawn Merritt, Wariner’s successor as Olympic champion, was given a five-metre lead and despite pressure from local hero Chris Brown, who ran a great last leg in 44.17, Merritt had enough in the tank to bring the USA home in a world-leading 2:58.43.

Neither Wariner nor Merritt were at their best but were close enough to it with legs of 44.80 and 44.72 respectively to notch up the USA’s seventh win in the competition’s 10 events.

The Bahamas finished second in 2:59.81 while Belgium – comprising of the three Borlee brothers, Dylan, Jonathan and Kevin as well as Julien Watrin – improved their national record by 0.04 to take third place thanks to a 44.01 final circuit from 2010 European champion Kevin Borlee, who needed to be at his best to keep Jamaica at bay after heroics on the last leg by Francis, who ran 44.00.

BACK
Pages related to this articleAthletes
Jeremy Wariner 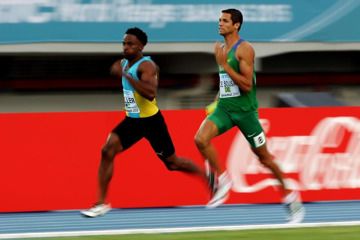