Mwangi clocks 59:07 at Copenhagen Half

James Mwangi Wangari of Kenya clocked the second fastest time in the world this year at the Copenhagen Half Marathon, an IAAF Silver Label Road Race, on Sunday (18).

In just his second race over the distance, the 22-year-old Kenyan reached the finish line in 59:07, knocking seven seconds from the course record set last year by compatriot Bedan Karoki.

Karoki was in the race looking to defend his title, but couldn’t keep up with Mwangi’s aggressive early race front-running.

A group of 18 passed five kilometres at a fast 13:43-13:46 clip, a pack size that wasn't particularly to Mwangi's liking. Upping the tempo, he was well clear and on his own five kilometres later, reaching 10 kilometres in a blazing 27:15, 25 seconds faster than this year's 10km world lead and 13 seconds clear of the seven men who made up the chase group.

By 15 kilometres, reached in 41:32, he had built a 29-second lead on Stephen Kosgei Kibet and five others struggling to hold on. His lead was reduced to 21 seconds at 20 kilometres when Karoki made a brief foray to the head of the chase pack.

But Mwangi held his advantage to the line beating Kibet, who clocked 59:28, by 21 seconds.

”I am in a very good shape,” said Mwangi, who won the Stramilano Half Marathon last March in his debut over the distance, clocking 59:12.

“The speed was excellent in the first half. But the wind was very strong. I really feel I am in shape to beat the world record.”

Five others, all Kenyan, came home within an hour. Albert Kangogo was third in 59:29, with Gilbert Masai and Karoki next in 59:31 and 59:32 respectively. Abraham Kiptoo was sixth in 59:36 and Edwin Kipsang Rotich seventh in 59:54.

The 21-year-old built a narrow three-second lead by 20 kilometres, reached in 1:04:39, with Chumba, Wanjiru and Chesir following two seconds apart. Gebrekidan held on to win in 1:08:00, knocking 29 seconds from Chesir's course record, and a whopping two minutes and 17 seconds from her previous best.

Chumba was second in 1:08:04, with Wanjiru third another two seconds behind. Chesir faded over the final kilometre to clock 1:08:20 to finish fourth. 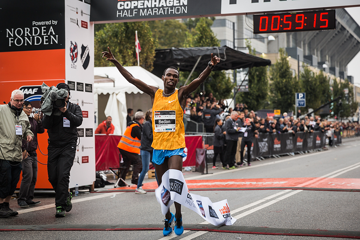