Although his best time is almost eight minutes slower than the course record, Uganda’s Moses Kipsiro is expected to challenge a contingent of Ethiopian runners at the Scotiabank Ottawa Marathon, an IAAF Gold Label Road Race, on 28 May.

The 2007 world 5000m bronze medallist and three-time Commonwealth Games gold medallist has been a major force on the track for the past decade, but the 30-year-old has also had his share of troubles.

He missed the podium by one place at the 2008 Olympics and 2009 World Championships. At the London 2012 Olympic Games he fell during the Olympic 10,000m final and wound up a disappointed 10th. But it was only a year ago that he turned his attention to the marathon, recording a PB of 2:14:18 at the 2016 New York Marathon where he finished seventh. Now he is preparing to show the athletics world what he is really capable of at the classic distance.

“So far I have only run two marathons and so I am still learning the event,” he said from his training base in Kaptagat, Kenya. “On my debut in Hamburg (in April 2016) I was on 2:06 pace until deep into the race, when my body started to shut down.

“I found out after that I was suffering from malaria at the time. New York was a more tactical race early on and a harder course. But after New York I know now that I am capable of a good marathon.”

Hamburg was not the first time he has been debilitated by disease. During the 2011 summer season, he couldn't explain the fatigue he was feeling during races nor his poor performances. Kipsiro, who has a 5000m PB of 12:50.72, was finishing well down the field and on point of collapse. Only later did blood tests reveal he had been suffering from both malaria and typhoid.

“I trained hard for my two previous marathons and I feel I learned from those experiences and now I am ready to show my best at the marathon distance,” he says. “My training is going very well. I am really pleased to have had a sustained period of no injuries, which has been the biggest issue for me the past few years.

“I train in a combination of being around my home in Kapchorwa, Uganda, and at the PACE training camp in Kaptagat, Kenya. When in Uganda I have a group of guys who assist me and when in Kaptagat I train with fellow PACE athletes such as (Kenyans) Mark Kiptoo, Micah Kogo and Emmanuel Bett.”

These days his marathon programme is overseen by Mike Skinner, a British international runner who works for PACE. Kipsiro ran 1:00:41 at the 2015 Delhi Half Marathon, an indicator that he has enormous potential at the full marathon distance.

Like many East African runners, Kipsiro feels an obligation to help out his family members; he is one of nine boys and four girls born in the Bukwo district in Uganda. They grew up making a modest living with a small farm. But when he was a young boy, cattle rustlers from a rival tribe raided their farm and stole the cattle. With his first earnings as a runner, he bought cattle for the family.

Now he has his own family and must plan for the future because he doesn’t know how much longer he will earn money from running.

“When I have some time to relax, I like to spend it on my farm,” said Kipsiro, who has three daughters. “I plant maize and look after my cows.

“I also spend time working on my business interests. I have a construction business and a timber business. When my running career has finished, these will be to where I switch my attention.”

Although his days of competing on the track are mostly behind him, he still remains ambitious.

“My goal is always to do my best in my next race,” says Kipsiro. “So for me right now I am focused on running a great race in Ottawa.  Then, after that, we shall see what options I have and long term I still see Tokyo 2020 as a realistic target for me.” 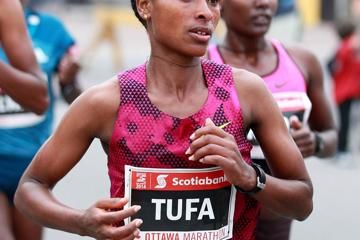