No other city in the world this year can boast of having two IAAF Gold Label Road Races on the same day, but on Sunday (18) the Portuguese capital of Lisbon will host the Rock’n’Roll Marathon of Lisbon EDP and the Rock’n’Roll Half Marathon Vodafone RTP.

The courses of both races will pass by iconic landmarks such as the Belem Tower, Jeronimo’s Monastery, the Discoveries Monument, the 25 of April Bridge, Cristo Rei Statue, Vasco da Gama Bridge and the Orient Rail Road Station.

For the half marathon, organisers have assembled a field containing more than 10 runners with personal bests faster than 1:00:00. All of them will be aiming to beat the 1:00:19 course record set in 2013 by Wilson Kiprop.

Bernard Koech leads the entries. Although his 58:41 PB was set on San Diego’s downhill course, it still makes him the third-fastest man in history under any conditions.

He has run faster than an hour for the distance on four other occasions, including a victory at the2013  EDP Half Marathon of Lisbon – a different event to next month’s one in the Portuguese capital – in 59:54. More recently, he won over 10 miles in Tilburg in 45:21.

Fellow Kenyan Alex Korio Oloitiptip is also in the field. He finished fourth in this race last year but recently improved his PB to 59:28 when finishing second in Copenhagen last month.

Atsedu Tsegay is one of two strong Ethiopian runners. He set a national record of 58:47 in Prague three years ago but hasn’t raced since finishing seventh at this year’s IAAF World Cross Country Championships. He will be joined by compatriot Guye Adola, the world half-marathon bronze medallist.

Bahrain’s Shumi Dechasa, who finished fifth in the marathon at this year’s World Championships, will contest his first half marathon since winning the Arab title over the distance in April this year.

Geoffrey Kusuro, the fastest Ugandan man over the half marathon with his 59:43 clocking in the Rome-Ostia race earlier this year, is also in the field, along with Eritrea’s Nguse Amlosom, who came within 16 seconds of his PB when finishing third in Yangzhou earlier this year in 59:55.

The women’s field is just as loaded as the men’s, with world marathon champion Mare Dibaba leading the entries.

The Ethiopian has won four of her past six marathons, including the World Championships in Beijing, the 2014 Chicago Marathon and the two most recent editions of the Xiamen Marathon. But in Lisbon she will be running mainly as an ambassador and doesn't intend on challenging for victory.

Fellow Ethiopian Feyse Tadesse, the 2014 Berlin Marathon runner-up and 2012 world half-marathon silver medallist, will be contesting her first race of 2015.

Kenyan women have won 10 of the past 15 editions of this race; Rebecca Kangogo Chesire looks to be their best bet of adding to that tally this weekend. The 23-year-old won the Stramilano Half Marathon earlier this year in a PB of 1:08:21.

Early on Sunday morning, the coastal town of Cascais will host the start of the third edition of Rock’n’Roll Lisbon Marathon.

Organisers are hopeful that the course records – Samuel Ndungu’s 2:08:21 and Visiline Jepkesho’s 2:26:47, both set last year – will be challenged. Both marks are also Portuguese all-comers’ records.

Lawrence Kimaiyo, who has a 2:07:01 PB, finished third in this race last year but will be looking to improve on that this time round. Fellow Kenyans Silas Sang, winner of the Belgrade Marathon this year, and Daniel Limo, the 2015 Los Angeles Marathon champion, should also be in contention.

While Kimaiyo owns the fastest PB, Limo’s 2:10:36 is the quickest season’s best of the field.

Based on this year’s form, Stephen Kosgei Kibet also looks capable of challenging for the victory. He clocked 2:11:08 in Hamburg earlier this year and ran a 1:01:09 half marathon last month.

Asbel Kipsang could be a dark horse. He has won both of his marathons to date and recently clocked a half-marathon PB of 1:00:37.

The Kenyan was a talented junior on the track, winning the 2009 world youth 3000m title. After a few fallow years, she moved to the roads in 2014 and found immediate success, winning her first four half marathons.

Her latest victory came in Copenhagen last month where she reduced her half-marathon PB to 1:08:29.

Compatriot Margaret Agai has finished on the podium in all four of her marathons to date. The fastest of those runs came in Daegu last year when she won in 2:23:28.

BACK
Pages related to this articleAthletes
Daniel Kiprop Limo 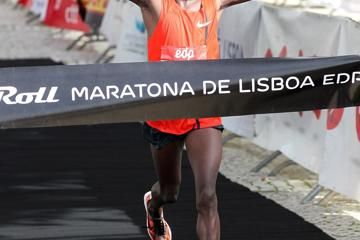 Kenyans capture all four titles at Lisbon's b... 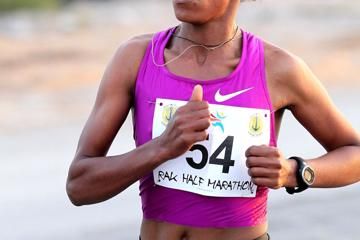