It was the Kenyan-born soldier, who serves in the French Foreign Legion and who got his citizenship for his adopted country two years ago, first win in four outings over the classic distance and, in fact, his first win in any competitive race for more than two years.

The race finished just in time before a thunderstorm hit the Korean city but the windy conditions hindered the leading runners finishing even faster after 30km.

Kiprotich took the lead at that point and then had a lonely race over the final 12km, but he still ran solid and regular three-minute kilometres by himself all the way to the line.

“I was planning to finish in around 2:06 today, and I told the pacemakers repeatedly to pick up the pace, but we had strong wind against us at that final stage of the race,” commented Kiprotich.

A group of 10 athletes ran away from the field after 8km and were on pace for a 2:06 finishing time until 15km, when the leading group started to split up.

As the pacemakers moved off the course after 30km, Kiprotich then moved away from his two remaining rivals and built up a 300m lead very quickly before finishing more than a minute in front of the next man.

Kiprotich only had a short time to get his breath back and take the plaudits as his wife Agnes Barsosio who was part of a a group of three athletes leading the women’s race, but in the end it was Kenya’s Margaret Agai, who had already improved her best time by more than eight minutes when finishing third in the Shanghai Marathon last December in 2:24:17, who won in a personal best of 2:23.28.

The first three women all broke the previous course record of 2:24:57 and set personal bests with Ethiopia’s Mulu Seboka second in 2:23:43 and Barsosio third in 2:24:03.

A total of more than 16,000 participants started the race in the host city of the 2011 IAAF World Championships in Athletics. 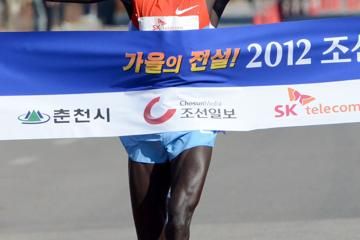 Kenya's Kiyeng out for course record at the D...