Gezahegn and Bekere victorious in Lanzhou

Gezahegn maintained his unbeaten record in China with a winning mark of 2:11:54 on the round-way course stretched alongside the Yellow River, 1:44 shy of the course record of 2:10:10 set two years ago by compatriot Abayneh Ayele.

It was the sixth title collected in China by Gezahegn, who debuted over the distance with a victory in Taizhou in 2015 and went on to win in Chongqing, Hefei, Yingkou and Hengshui last year.

He competed in what was his first marathon race outside China in Rotterdam last month and improved his personal best to 2:07:29 with a solid sixth-place finish.

“I was targeting the course record but the heat during the second half of the race made it too difficult for me,” said Gezahegn, who set a course record of 2:08:54 at last year’s Hefei Marathon.

Running under cloudy conditions, a leading pack of 10 runners paced the race to five kilometres in 15:18 and 10km in 31:01. However, after 20km the leaders started to slow down as the temperature began to rise.

Gezahegn tried to pull away for the sole lead after the group of eight passed the 30km mark in 1:34:28. But his first three efforts from 30km to 37km came to nothing, as he was soon caught by compatriot Fikadu Kebede each time.

He finally seized the leading position with his fourth surge four kilometres before the finish and soon built an advantage of more than 10 seconds.

Gezahegn saluted to the audience from time to time and stretched his hand toward the sky before breaking the tape to celebrate his victory.

Kebede, who improved his PB to 2:09:37 to win in Rabat in March, lagged 12 seconds behind to finish second. Kenya’s Ernest Kiprono Ngeno, who can boast a career best of 2:07:49 achieved last year in Gyeongju, finished third in 2:12:24.

Defending champion Tsehay Desalegn surrendered her title in the women’s race. She dropped out of the leading group after 15km and finished sixth in 2:38:03.

The title went to Desalegn’s consistent compatriot Ashete Bekere, a 2:23:43 performer at her best, who finished seventh at last year’s Tokyo Marathon in 2:25:50 and opened 2017 with a second-place finish in Seoul in 2:25:57.

The 29-year-old Bekere shrugged off a strong challenge from Tigist Girma of Ethiopia before sealing the victory in the final kilometre.

The leading quartet remained almost shoulder-to-shoulder for another 20 kilometres before Bekere pulled away, leaving Girma chasing alone and the other two trailing further behind.

The 23-year-old Girma, winner of the 2016 Beirut Marathon with a PB of 2:32:44, managed to catch up with Bekere after 41km but couldn’t withstand her final charge for the win.

Girma trimmed 29 seconds off her PB to finish second in what was only her third professional marathon to date. 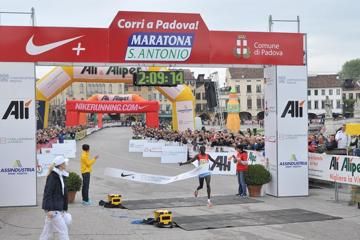