Gilbert Chepkwony will be looking for another victory over a strong field at the Lanzhou International Marathon, an IAAF Bronze Label Road Race, on Saturday (11).

The 31-year-old, who has a personal best of 2:08:16, won in Lanzhou two years ago when he outraced fellow Kenyan William Chebor to claim the title in 2:14:18. But another victory this weekend might not be as easy for Chepkwony.

The organisers have assembled a total of 12 runners with sub-2:10 PBs for the men’s field, making the course record of 2:10:10, set last year by Ethiopia’s Abayneh Ayele, seemingly vulnerable.

Ethiopia’s Tariku Jufar has a PB of 2:06:51, set when winning the 2012 Houston Marathon. The 31-year-old has also notched up victories in Beijing, Ottawa and Tiberias, but last year he had a best of just 2:17:32. This weekend’s marathon will be his first race of 2016.

Kenyan duo Joel Kimurer and Robert Kwambai have been consistent in recent years, putting them among the favourites in Lanzhou.

Since making his marathon debut in 2012, Kwambai has run faster than 2:10 every year. The 30-year-old set his PB of 2:08:18 when finishing fourth at last year’s Xiamen Marathon.

Alphonce Felix Simbu is another man to watch on Saturday. The in-form Tanzanian, who finished 12th in the marathon at the IAAF World Championships Beijing 2015, improved his PB by more than two minutes in March, clocking 2:09:19 at the Lake Biwa Marathon.

The women’s course record could also be challenged on Saturday.

The field is led by Ethiopia’s Dinkinesh Mekash, who clocked a career best of 2:23:12 to finish second at the 2015 Frankfurt Marathon. The Lanzhou course record stands at 2:31:22; the last time Mekash ran slower than that was back in 2011. The 30-year-old heads to Lanzhou with a string of 12 consecutive sub-2:31 marathons, including a third-place finish at the Paris Marathon earlier this year.

Compatriot Fatuma Sado could be Mekash’s biggest threat on Saturday. The 24-year-old cut more than a minute off her PB to finish third at last year’s Toronto Marathon in 2:24:16. She also has considerable experience of running in China, having won the 2013 Xiamen Marathon and 2014 Beijing Marathon.

Olympian Souad Ait Salem is also a serious contender. The 37-year-old holds the Algerian record at 2:25:08 and was a back-to-back winner at the 2014 and 2015 Hannover Marathon.

Ethiopia’s 2008 world cross-country silver medallist Mestawet Tufa can also not be ignored. The 29-year-old recently came within 14 seconds of her PB when finishing seventh at this year’s Dubai Marathon in 2:26:34. In 2014 she set a course record at the Yellow River Estuary Marathon, clocking 2:28:27.

The women’s field contains six other runners with PBs faster than the course record, including 2015 Chongqing Marathon winner Ding Changqin and fellow Chinese runner He Yinli.

BACK
Pages related to this articleAthletes
Gilbert Kiptoo Chepkwony 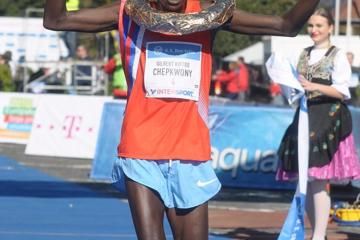