Victorious return for Thompson in Birmingham

A triumphant return to action for Great Britain’s Chris Thompson and a competitive half marathon debut to remember for Poland’s Dominika Napieraj were the highlights of the 2015 Great Birmingham Run, an IAAF Silver Label Road Race, on Sunday (18).

Thompson, the 2010 European 10,000m silver medallist, has struggled with injuries since his 2:11:19 marathon debut in London last year and questioned whether he would be able to return to the sport.

But he demonstrated that he had lost none of his racing ability, overcoming an undulating course and the considerable threat of Spain’s Ayad Lamdassem and Norway’s surprise package Sondre Nordstad Moen to sprint clear in the final metres to take victory over the half marathon distance in 1:03:00.

Thompson had surged straight to the front of the pack in the first mile, taking advantage of a downhill start to head a large group that included Nordstad Moen, Lamdassem, Spain’s Javier Guerra and Italy’s fancied Ruggero Pertile.

By the end of the second mile, however, it was clear that only three athletes would contend for the win, with Guerra falling back to fourth place, a position he would retain to the end, and Pertile dropping back even further.

Nordstad Moen led the way for the following 10 miles, with Lamdassem and Thompson tucking in behind.

The 24-year-old Norwegian, who is targeting the Florence Marathon in six weeks’ time, battled hard and maintained a steady pace, while his two more experienced rivals waited to make their move.

In the end it was the 34-year-old Thompson who took the initiative, testing Lamdassem’s resolve at the foot of a long incline after 12 miles. Norstad Moen fell back, leaving Thompson and Lamdassem to contest a close finish and, despite an attempt to strike for home by the 2011 European cross-country silver medallist, Thompson responded and took victory by 10 metres.

A delighted Thompson couldn’t contain his relief at finally crossing the line first in a race in which he was runner-up in 2013.

“I’m over the moon,” he grinned. “One of the biggest things is that despite how my body felt, I’ve run that quick and felt surprisingly comfortable even though my leg wasn’t functioning very well. I know now there’s a 61 in it for me and that made the whole fight worth it.

“I didn’t know if the achilles would allow me to get back and if the rest of my body would allow me to do it. That’s why today was so emotional for me, because it’s told me that I’ve got 10 months and that fitness won’t be an issue and I can do it. Rio’s the goal and that result will sustain me now. I’m just so happy to have won.”

At the same time, Thompson conceded that it wasn’t an easy victory and that his mental toughness had come to the fore.

“I had to fight for everything today, from mile one to mile 13” he added. “Usually in a race you’re feeling alright at the start, but today everything was falling off. I had to think about checkpoints. When I got to the bottom of the hill, I thought, ‘Right. Now it’s just guts.’ Luckily I had the mental edge.

“With 400m to go, physically he (Lamdassem) had me, but mentally I had him. My rough plan was to get out and to hide how much I was physically hurting. I knew that my body would pack in at some point in the race, so I wanted to make them think I was in good shape. I decided that I would just sit behind Ayad all race. He wanted me to lead, but I wasn’t having any of it.

In the women’s race, Napieraj too produced a tactically perfect run to prevail over Spain’s 37-year-old Alessandra Aguilar by 60 metres in 1:13:39.

The pair had engaged in a three-way battle with Aguilar’s compatriot Maria Diaz since the six-mile mark, but the 24-year-old Pole moved clear in the final two miles to record a comfortable win, while the Spanish duo retained their places to finish second and third.

It was Napieraj’s first serious attempt at racing over 13.1 miles and she was optimistic for the future following her win.

“I didn’t expect that I could win, but I’m really happy,” she said. “I wanted to keep to three-and-a-half minutes per kilometre and it was hilly. It was my first half marathon, and I don’t have any plans for any further races this year, but I’m targeting maybe the World Half Marathon Championships or a full marathon.”

“I have run track this year and beat my 5000m personal best,” she explained. “But I plan to run on the roads in future.” 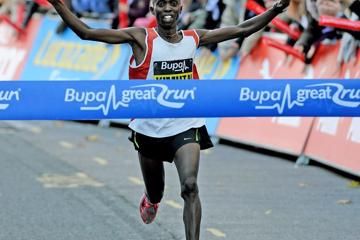 Unheralded Kimutai and Wanjiku triumph at the... 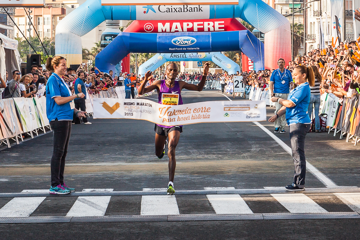