Kenyan runners have dominated the men’s race of the BMW Frankfurt Marathon for more than a decade as the past 12 champions of the IAAF Gold Label Road Race have all come from Kenya.

However this win streak will be tested to the limits at this year’s edition of the race on 26 October and it could well be the Ethiopians who finally make the headlines.

Mekonnen stunned the road-running world earlier this year when he smashed the world junior best on his marathon debut. Winning the highly competitive Dubai Marathon in January with a time of 2:04:32, he became the 11th-fastest marathon runner ever at the age of just 18. The way he ran away from top-class contenders in the final stages of the race suggests that there is much more to come.

“I could have run faster, but all of us in the leading group lost some energy during the first part of the race,” said Mekonnen. “This was because the pace changed so often. It seemed that the pacemaker was doing some kind of fartlek.”

With a more even pace expected in Frankfurt, he hopes to break Haile Gebrselassie’s Ethiopian record of 2:03:59. He may even target Wilson Kipsang’s course record of 2:03:42 from 2011.

Such fast times would not deter Feleke. Coming back from health problems which stopped him for almost a year in 2013, and despite some stomach problems during the race, he clocked a course record of 2:05:41 in Vienna in April, making him the seventh-fastest marathon runner in the world this year.

Feleke’s PB stands at 2:04:50, but he hopes for much faster times. “My dream is to break the world record,” he said after his Vienna victory. “I train very hard for this.”

Kebede will be among the favourites of the women’s race Frankfurt. Just two Ethiopian women have won the Frankfurt Marathon in the past, but both of those victories have been within the past three years.

Kebede has twice come close to that barrier. The 24-year-old is a two-time Berlin Marathon champion, clocking a PB of 2:20:30 with her most recent victory in 2012 to take three seconds off her previous best. She has also been victorious in Rotterdam, Tokyo and Shanghai.

BACK
Pages related to this articleAthletes
Aberu Kebede 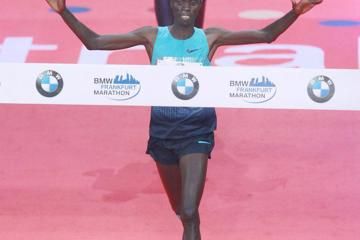 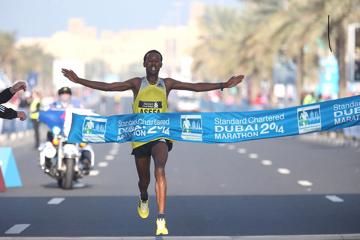