Degefa will start as red-hot favourite thanks to her enviable record on the flat and fast streets of Dubai. In 2017, the diminutive 29-year-old stunned an experienced field by winning in Dubai on what was her marathon debut, clocking 2:22:36. A year later, she finished fourth and improved her PB to 2:19:53.

Last year she finished second in Dubai in 2:17:41, taking 15 seconds off the Ethiopian record with what is now the fifth fastest time in history.

Aside from her three appearances in Dubai, the only other marathon she has contested is the 2019 Boston Marathon, which she won in 2:23:31.

Fellow Ethiopian Bezunesh Deba will be racing in Dubai for the first time. The 32-year-old set her PB of 2:19:59 when winning the 2014 Boston Marathon, but didn't race at all in 2019 so will be treating this as a comeback race.

Kebede Megertu Alemu made a big step up in the second half of 2018. She chopped eight minutes from her half marathon PB with 1:06:43 in Copenhagen and reduced her marathon best to 2:21:10 to finish second in Frankfurt.

Two years after making her marathon debut in Dubai, world cross-country silver medallist Dera Dida is back and aims to improve on the PB of 2:21:45 she set on her previous visit.

Dubai has often been a happy hunting ground for marathon debutantes, so 20-year-old Hawi Feysa will be hoping for a strong run in her first race at 42.195km. The 2017 world U20 cross-country silver medallist finished eighth in the 5000m at last year's World Championships.

The men's race is guaranteed a new champion as no previous winners are entered for this year's Dubai Marathon.

Ethiopian men have triumphed at the past eight editions of the race and that trend looks set to continue as a strong Ethiopian contingent - including six men with PBs faster than 2:07 - will be in action on Friday.

With a PB of 2:04:40, 25-year-old Deksisa is the fastest athlete on the men's start list. Despite his relatively young age, the talented Ethiopian has built up plenty of experience at the marathon distance after a brief track career.

At the age of just 20, he won the 2014 San Diego Half Marathon with a personal best of 1:00:12, then two years later he moved up to the marathon and ran an impressive 2:06:22 debut in Rotterdam to finish second.

Since then he has fully focused on the 42.195km distance and claimed his first marathon victory in Mumbai in 2018 before winning again in Hamburg a few months later. It proved to be his best year so far as he ended it with a 2:04:40 PB to finish third in Amsterdam. His lifetime best is just one minute outside the Dubai course record set in 2019 by Getaneh Molla.

Deksisa’s compatriot Seifu Tura is another of Ethiopia’s crop of rising stars who made an impressive marathon debut with a solid second place in 2:09:26 in Seoul in 2017.

Still just 22, Tura enjoyed his best day at the 2018 Standard Chartered Dubai Marathon when he took full advantage of the renowned fast course to carve a big slice off his personal best, improving by four minutes to run 2:04:44 for seventh. The young Ethiopian has also sealed marathon wins in Milan and Shanghai, while setting a half marathon personal best of 59:17 in Buenos Aires in August.

With a best of 2:06:00, Andualem Belay Shiferaw may not be the fastest in the field, but he will be feeling confident after being unbeaten at the marathon distance in 2019. He set his PB in his most recent race, winning the Lisbon Marathon in October.

Aychew Bantie Dessie, 38-year-old Birhanu Bekele Berga and Limenih Getachew Yizengaw are the other sub-2:07 performers in the field. If the conditions are kind - temperatures are expected to be about 19C at the time of the race - then they could improve on their times on the flat and fast course.

Bahrain's Aweke Ayalew and Kenya's marathon debutant Eric Kiptanui will be looking to end Ethiopia's winning streak in Dubai. Ayalew made his marathon debut in Frankfurt last year, finishing third in 2:07:12, while Kiptanui's half marathon PB of 58:42 suggests he could run a swift time in the marathon.

The race will be streamed live on the event's official YouTube Channel. 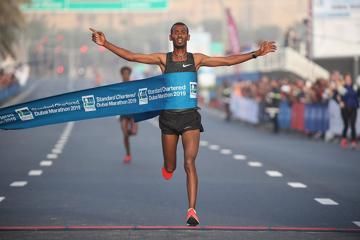