Olympic 10,000m bronze medallist Tola, who ranked 10th on the world all-time list with his 2:04:11 course record from last year, is convinced that he is capable of going faster in this year’s race.

Like her compatriot Tola, Degefa will be returning to the scene of her greatest victory. In 2017 she also stormed to first place and the $200,000 prize money with what was a winning marathon debut of 2:22:36, the fourth fastest time in the event’s history.

Prior to that, the diminutive 27-year-old had established herself as one of the world’s top half-marathon runners. When she set her lifetime best of 1:06:14 in Prague in 2016, it ranked her eighth on the world all-time list.

“It’s a great compliment to Dubai that Tamirat has decided to run in January and not compete in the London Marathon in April,” said race director Peter Connerton. “He is a wonderful young talent and at 26 has many great years ahead of him, which is why so many race directors would like him in their line-up. The fact he believes he can attack our course again in January and secure yet another personal best can only be good for the event.

“We will be able to confirm more elite athletes field over the coming two weeks but it is safe to say we are delighted to welcome back the two runners who won both the men and women’s events in 2017,” added Connerton. “We will also be finalising the marathon route with one or two changes to the course for 2018.” 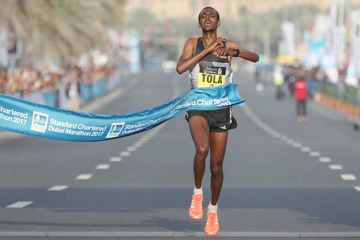