Kipyego and Bekere prevail at Ceske Budejovice Half Marathon

Barselius Kipyego triumphs at the Ceske Budejovice Half Marathon (© RunCzech)

Breaking from the field in the 18th kilometre, Kipyego reached the line in 1:00:30 to win his second half marathon of 2016. In a largely solo effort, Bekere clocked a race record 1:10:40 in the women’s contest.

The thunderstorms predicted in this region of southern Bohemian didn’t materialise, but a short shower did add humidity to the air and some puddles to the asphalt as the race got underway.

In the men’s race, an ambitious early pace reduced the lead pack to just two by the 10km mark, with only Kipyego and Henry Kiplagat maintaining contact with the two pacesetters who were setting the stage for a sub-60-minute finish.

Shortly after, the course’s only real hill proved to be the decisive factor. As one of the pacesetters dropped out, Kipyego passed the other, Geoffrey Koech, with Kiplagat in tow. Kipyego increased his lead as they approached the 18th kilometre and cruised on to a decisive victory.

“I will go back to Kenya to train then return to Prague in September for the 10k,” said Kipyego, 22, who clocked 59:30 in the Czech capital in April and served as a pacesetter for the Prague Marathon in May.

In the women’s race, Bekere was alone by 10k, some 30 seconds clear of pre-race favourite Risper Chebet, and forged on to win by a margin nearly three times that while lopping 14 seconds from the previous race record.

Bekere, who ran 2:23:43 in the Dubai Marathon this year, said the race hadn’t quite gone according to her pre-race playbook but added that she was very pleased with her new Ceske Budejovice record. 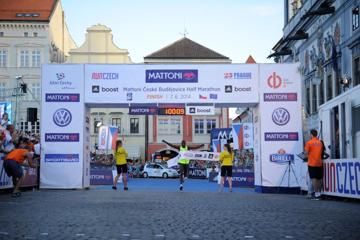 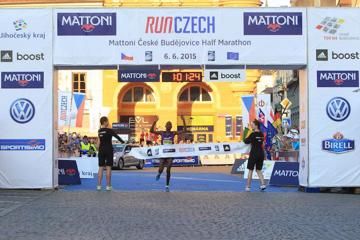