The best supported athlete in the Bournemouth Marathon on Sunday (4), an IAAF Bronze Label Road Race, will doubtless be local boy Steven Way.

The 41-year-old has acquired a cult status in British running circles having gone from being a 105kg 20-cigarettes-a-day smoker a decade ago to placing 10th in the men’s marathon in last year’s Commonwealth Games. He also became the British 100km record-holder and one of the world's top ultra-runners.

However, having competed at last month’s IAU World 100km Championships in the Dutch town of Winschoten, where he started as one of the favourites but dropped out just after halfway with glute issues, he is unlikely to be at his best over the marathon distance on England's south coast of England. Instead, the strongest challenge is expected to come from East African runners.

The 27-year-old was also second last year, in breezier conditions, in 2:25.30 and he returns in a bid to regain his title.

His principal rival could be Kenya’s David Toniok. The 31-year-old holds a personal best of 2:10:39 from 2012 and is the fastest man in the field. He is also a proven winner on British soil, having triumphed at the 2014 Edinburgh Marathon.

The European threat is likely to be headed by France’s Nouredine Jalal and Latvia’s Valerijs Zolnerovics. Former Morocco international Jalal has a personal best of 2:14:23 from the 2011 La Rochelle Marathon.

Zolnerovics represented his nation at the 2008 and 2012 Olympic Games. He was eliminated in the 3000m steeplechase heats in Beijing and failed to finish the marathon in London but he was a respectable 12th in last year’s European Championships marathon in 2:15.56.

In the women’s race, Ukraine’s 2014 champion Kateryna Stetsenko will return and defend the title that she won in 2:30:58 last October.

The 33-year-old’s form so far this year has not quite been so strong. She ran a modest 2:41:34 in Jacksonville, USA back in February but, after a period of recuperation and rebuilding, she is looking to peak again in Bournemouth.

With a personal best of 2:27.51, albeit from five years ago in Dublin, she is also the fastest in the women’s field on paper.

Stetsenko will again come face-to-face with Joan Kigen, who she beat into second place last year. The Kenyan will be hoping that it is third time lucky in Bournemouth, having also finished as the runner up in 2013, when she set her personal best of 2:31:27.

However, Kigen is no stranger to the winning feeling, and has triumphed in Edinburgh and Jerusalem this year. In gale-force conditions in the Scottish capital in May, she won in 2:39:43 and in Israel she took the tape in 2:45.55 in March.

Kigen’s compatriot Purity Kimetto might also be worth keeping an eye on. She has a best of 2:37:20 over the classic distance but her half marathon best of 1:11.52 from two years ago hints that there might yet be more to come in the marathon.

Just along the English coastline, Kimetto finished fourth in the Brighton Marathon last year in 2:38:53, where she was prominent despite struggling badly in the latter stages with a hip injury.

The marathon itself is a climax of the Bournemouth Marathon Festival which features 5km and 10km on Saturday before half marathon and marathon events on Sunday.

About 11,000 runners are expected to take part across the two days.

BACK
Pages related to this articleAthletes
Kateryna Stetsenko 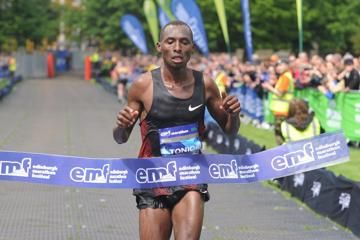