Not an ordinary comeback in Portland: Ali’s new perspective

On Friday, at the Oregon Convention Center, Nia Ali was doing a lap of honour and giving endless interviews after winning her second world indoor title in the 60m hurdles.

It was just like two years ago in Sopot with one important difference. On this occasion, she had company: her nine-month-old son Titus.

Was the world expecting Ali’s swift comeback to the top? Maybe.

As Ali reflected, the hurdlers never count anyone out. Especially as she had proved her credentials earlier in the season, having won her overall event title at the inaugural IAAF World Indoor Tour. But there was no lack of unexpected twists and turns in Ali’s career that led to this glorious moment in Portland.

Ali started off in athletics at the age of six, after repeatedly outrunning the young cousin of a local track club coach at day care and eventually signing up for said track club.

“I was a distance runner back then,” she smiles. “I ran cross country, set some records in the 800m and 1500m. I only took up the hurdles during my senior year of high school.”

Nia was recruited for college as a hurdler, but during her first year her versatilty came to the fore asgain. She took a stab at a heptathlon at the conference championships, and won the title.

Ali toyed with the combined events for a couple of years and high jumped and hurdled throughout her college career.

In 2011, while Ali was getting ready to begin her post-collegiate career after winning the World University Games title, negotiating the barriers took a front seat again.

And she definitely had someone to look up to, training in the same group as Ryan Wilson, a 13.02 hurdler with no lack of experience on professional circuit.

Ali always liked Wilson’s attitude towards the sport and the constant desire to branch out and learn from others. “So one day I just came up to him and asked what he thought about coaching me. And we went from there,” Ali reminisces.

Wilson agreed to become Ali’s coach even though he was, and still is, pursuing his personal goals.

At the IAAF World Championships Moscow 2013, Wilson had to play a double duty, representing his country on an international level for the first time and looking after Ali, who was also making her Team USA debut on such an exalted level.

“Luckily, I’m not a needy athlete, so we both can be in our own zones,” explained Ali. “But the fact that he can make it work is a true testament to his character, as a person and as an athlete. It’s all him.”

In the Russian capital, it was Ryan’s time to shine, as he claimed the silver, while Ali exited in the semi-finals. But just a few months later, the roles were reversed, as she took the world by surprise by taking the world indoor title.

The outdoor season of 2014 was somewhat uninspiring, after Ali got injured during a warm up before the Drake Relays in April.

And just when the hurdler started plotting her road to Beijing 2015, she found out that she was pregnant.

“It’s one of those things when you know it’s great”, said Ali, who always wanted to have a lot of kids, especially coming from a family with 25 siblings. “But in our sport, it’s considered a career suicide. I was 26 and I wanted to make the best of it. And immediately, I started looking forward to defending my world indoor title in 2016.”

After maintaining her usual training regimen for the first four months of pregnancy, Ali went back from Los Angeles to her family in Philadelphia and decided to relax.

“I talked to Jasmine Chaney (the US 400m hurdler), who’d just had a baby, and she told me: you should take it all in. I followed the advice, as I knew once I got back, there was going to be some serious training, and I wanted to be ready for it.”

Ali’s competitive comeback took place in December 2015, at a low-key meeting in New York City. She was spending holidays with family in Philadelphia and decided to drive up the road to the Armory the day after Christmas to race.

“I wanted to get the season opener in before the New Year, so it was convenient,” she admits. “Even though I ran 8.26 and it wasn’t spectacular, I was pretty pleased to know I was in a good range and could work from it.”

By Friday, as she describes it, her mind and body were in synch.

“Sometimes your body feels good but you don’t believe it and your coach has to convince you that you look good. On that night, my body and mind were on the same page.”

The now twice world indoor champion was thrilled that her son Titus was actually there to witness her triumph.

“I don’t take him to the track too often when I train, because I haven’t mastered that whole ‘focusing when he’s around’ thing,” she laughed. “I get into a parent mode too quickly. Unless my mom or his father (400m hurdler Michael Tinsley) are there, I can’t focus.

“Being a mom and an elite athlete is difficult, but it’s very rewarding. I wouldn’t have it any other way.

“I love my son, love coming back home after long days. It puts what I do on the track in a perspective, and I have an amazing support system that helps make it happen. I can’t take the full credit.”

With the Rio 2016 Olympic Games so close, Ali will only get a few days’ rest and then it’s back to training, with her summer opener looming on the horizon as early as in April. And she might have some more surprises up her sleeve.

Ali has continued to train as a combined-events athlete and a heptathlon is on her agenda. She hasn’t ruled out being serious about the heptathlon.

“One can’t just emerge into someone’s event and not be prepared to go at it with the best. So if I do it, I plan on being a contender. I really plan to focus on it this outdoor season and see where my fitness is.

“If it allows me to do both heptathlon and hurdles, then I will. If not, I’ll be smart about it.”

BACK
Pages related to this articleAthletes
Nia ALI 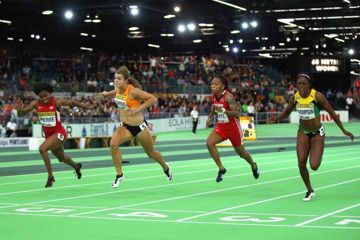