Satisfaction for Ryan Hill after winning the 3000m silver medal at the IAAF World Indoor Championships Portland 2016 lasted just a matter of moments.

After a furious finish carried him from fifth place to second over the last of 15 laps, he checked the scoreboard and learned what could have been.

“It’s my first medal, it’s a great finish for me, literally my highest global finish. But then when I looked up and I see the time, how close I was to gold,” Hill said. “I know I probably made a few mistakes down the last K (kilometre) so there will probably be that little bit of disappointment that I could have won gold.”

As little as 0.18 separated him from Ethiopia’s Yomif Kejelcha and the latter’s winning time of 7:57.21. Hill’s late rush and lean at the tape came up just short.

The tactical race demanded quick decisions and instant reactions. A slow pace for the first nine laps gave way to a frenetic final 1000 meters that featured surging and jostling in the pack and a split of under 2:23 for Kejelcha.

Hill knew that a solitary break was unsustainable and opted to stay on the rail and with the pack for as long as possible.

“I knew I could be in the top five, but anything more than that would take an incredible last lap, maybe a few other guys going for the win and dying back a little bit, which is pretty much what happened,” added Hill.

His strategy kept him in contact at the front of the pack when the lead group began to shrink to a handful of runners, as Hill debated with himself the possible outcomes of every turn of the race.

“Maybe I would have tried to go with one of those moves with 800 to go, so that I was at least third with a lap to go. But we’ll never know if that kind of move would have cost me everything.

“Had I gone for it, maybe I would have blown up and come in seventh or something.”

Before the championships in Portand got underway, Hill told the media that he’d be satisfied with a top-five finish, but with his finishing speed, the possibility always existed for much more.

Since his collegiate days at North Carolina State University, Hill’s kick has become a bit of lore in the United States.

“He brings it over the last 100 meters,” said Canada’s Mo Ahmed, a former collegiate rival who finished ninth in the 3000m final who now lives and trains with Hill. “That’s his patented finish.”

Earlier in his career, however, Hill learned that he needed to increase his mileage to ensure he was in position to get the most out of his closing speed. “There was a time when I was getting outkicked because I was too weak.

“Once I started focusing on strength to help my kick, that’s when that same speed started coming back.”

The impact on the competition is physical and psychological.

“When you have a guy who just blows your doors off, it stays with you for a little bit, because then you’re scared of that guy, you don’t know how to beat him,” said Hill.

It wasn’t long ago when a single US medal in the distance events would be a major surprise. Hill’s silver was on one of six medals for the US in events 800m and longer at these championships earlier this month.

As a high school runner, he and his friends read a book about Alan Webb and got a peek at the US middle-distance star's training. Webb’s work ethic served as an inspiration and that, Hill believes, was the needed spark for the US upswing.

Hill’s result in Portland should give even more confidence to the US distance-running fraternity.

The men’s 3000m field was one of the strongest of the championships in terms of the quality of the field. On the final lap, Hill sprinted past defending world indoor 3000m champion Caleb Ndiku and world 1500m bronze medallist Abdalaati Iguider.

As he transitions to the outdoor season and the distance goes from 3000m to 5000m, Hill sees more of an opportunity to use that kick.

“My style of running will work a lot better on an outdoor track," he said. "More room to work, positioning isn’t as crucial because I’m not great at getting to the front and staying there. But I’m great at going from fifth to second. Or fourth to first.”

BACK
Pages related to this articleAthletes
Ryan HILL 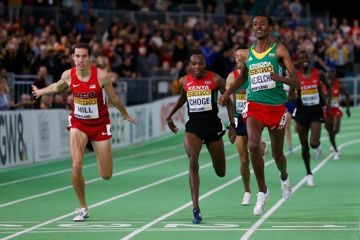