Organisers of the World Athletics Indoor Championships Belgrade 22 launched the event’s official logo at a ceremony in the Serbian capital’s City Hall today.

More than 1000 athletes from some 150 countries are expected to participate the Championships which are set to take place from 11-13 March 2022.

Designers drew upon the culture and heritage of both Serbia and Belgrade as well as the impact that athletics has on everyone’s lives as inspiration for the logo.

The most important and historic buildings and landmarks in Belgrade – the monument to Prince Mihailo, Belgrade Palace, the Kalemegdan Fortress and the Ada Bridge – are represented within a World Athletics graphic which embodies the organisation’s initials and incorporates an image representing an athletics track in the colours of the Serbian flag.

“This is an exciting milestone for the city of Belgrade, the host of the 2022 World Indoor Championships, as it reveals a logo that represents both its culture and ambitions as a sporting city,’’ World Athletics president Sebastian Coe said. “In just 18 months, Belgrade will welcome the global athletics community and we are confident that our Local Organising Committee will be well-prepared and will deliver a highly successful event for athletes and fans from around the world. I am very much looking forward to being there and seeing our athletes put on a show.”

The Minister of Youth and Sports Vanja Udovicic, the Deputy Mayor of the City of Belgrade Goran Vesić, the President of the Serbian Athletics Federation Veselin Jevrosimovic and the Local Organising Committee Director Slobodan Brankovic were present at today’s launch.

“Serbia, the Ministry of Youth and Sport, the Serbian Athletics Federation and the City of Belgrade have a great honour to host this big international sporting event,” Udovicic said. “This will be a great opportunity to remind the world that Serbia knows how to organise the greatest international sporting events and the World Athletics Indoor Championships will not be just a sporting event, it will also be an opportunity for our capital city to open its doors to the visitors from all around the world.”

Vesić added: “This is important for our country, the city, and for our sport. To host a world athletics championship, whether outdoors or indoors, means to host one of the most high-profile sporting events in the world after the Olympic Games and the World Cup. We will do our best to justify the trust World Athletics have placed in us and believe that these World Athletics Indoor Championships will be the springboard to successfully hosting other major events here so that Belgrade becomes the sports capital of this part of Europe.”

The combination of elements in the logo will serve as a potent reminder of the values and prestige this competition will have when it takes place in 2022.

"Belgrade hosted the 2017 European Athletics Indoor Championships, which was a huge success,” Jevrosimovic said. “We showed Europe just how well we can organise major sporting events on a continental scale. In 2022, our ambitions are global, and I believe we will build on our achievements and experience from three years ago to stage an outstanding event.”

Belgrade is well known as a sports city and is especially famous for its football teams. It is the largest city in the Balkan region and has been a hospitable and enthusiastic host of many major events, both sporting and non-sporting, in the recent past.

The city’s tourist infrastructure is growing every year and there are now more than 100 hotels in Belgrade, an increase of more than 50% in less than a decade.

It boasts modern sports facilities, such as the Belgrade Arena, and has excellent connections between airports, competition, and training venues, vital assets to successfully hosting a sporting event of the magnitude of Belgrade 22.

Brankovic said: "This is the biggest event in the history of Serbian sports. Serious work awaits us in creating the best conditions not only for the athletes, but also athletics fans. For us, these world championships are not just a competition that lasts for three days. Everything we do is also dedicated to the long-term impact of having such an event here in Belgrade. We are looking to the future and want to promote sport in the years ahead and act as advocates for healthy living habits across our entire nation.”

The next promotional event for Belgrade 22 organisers is ‘GET TO ... 22’, an innovative world-class shot put competition which will be held in the centre of the city, on Republic Square, on Thursday 17 September. Several of the world’s top shot putters are expected to compete. 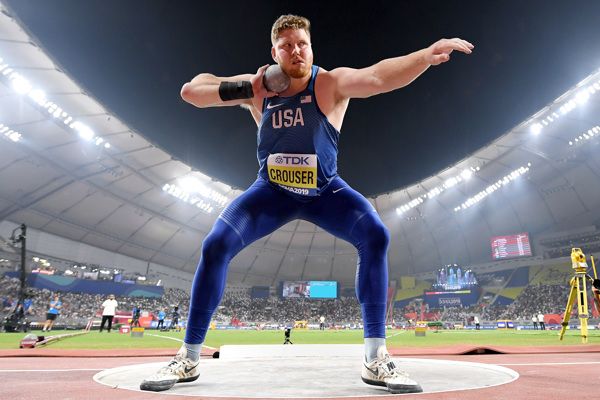 Few would assume that a town called ‘Boring’ would produce one of the most exciting sporting prospects in the world.