Udine, ItalyThe steepsided hill on which Udine castle imposingly stands provided a colourful backdrop to the finishing straight of the IAAF World Road Running Championships in Udine’s Piazza 1st Maggio. Hundreds of flag waving Eritrean fans, who had travelled the 650km from the large national ex-pat community which is situated in Rome, packed its grassy banks, exuberantly celebrating each time the leading pack of men’s runners passed into their view.

The noise they made was even loud enough on occasions to drown out the sound of the rock music which pounded away to the rhythm of the runners to keep the crowd entertained during the running of three loop laps of today’s Half Marathon.

Eritrea’s World Road Running champion Zersenay Tadese who retained his title summed-up the inspiring atmosphere. “Today it felt like the whole of Eritrea was running with me” on the streets of Udine. “The support of them (the Eritrean fans) was very important to me.”

Spelling of name no longer in doubt, victory never was!

Tadese whose nickname in Spain where he lives and trains is ‘Luchi’ because the Police originally mis-read his passport and used this his mother’s family name for all his official Spanish documentation, was able to correct one piece of personal information definitively today. For years since his emergence into the world’s running elite the Eritrean’s name had been spelt as it is pronounced ‘Tadesse’, with two ‘s’, but he confirmed after the race that his name is actually spelt ‘Tadese’.

If Tadese’s name was ever under question his current status as the world’s best road runner never was seriously in doubt in Udine’s glorious sunshine.

Tadese made the pace throughout most of the race. At the 15km point en route to the Half Marathon the pace was just five seconds short of the World record for that intermediate mark (41:34 to 41:29).

Expectations were thus very high we would see something exceptional by the end of the race, and we were rewarded but it wasn’t in terms of time, though Tadese’s 58:59 championship and national record was very special indeed. No, what was exceptional was the Eritrean’s experienced racing head.

After doing all the work in front up until 15km Tadese wisely decided that, with three athletes still running with him - Kenyans Patrick Makau Musyoki and Evans Kiprop Cheruiyot and Ethiopian Deriba Merga - that it was time to safeguard the gold medal.

“The race had to slow (after 15km). There were three with me and no one was prepared to help me. So I decided to wait my time to make the win (certain). I dropped back (behind his three challengers) and planned again to go (for victory) with 1km to go” to the finish.

With one kilometre to go Tadese put his strategy into action and engaged his top gear and as the ferocity of his attack was displayed on the giant video screens situated in the Piazza 1st Maggio, a mass of green/red/blue flags, those of Eritrea, were once more unfurled to greet their hero, and the music playing from the PA system became subdued by the shouting and applause of Tadese’s ecstatic countrymen and women.

How hard was today’s race?

“Mombasa (2007 WXC) was the hardest of all my races, and then perhaps it was Athens (2004 Olympics 3rd place 10,000m). Today’s race in Udine ranks as the next hardest. I had strong competition from my opponents.”

“Yes, I am in good shape and perhaps I will try again soon for the World record (half marathon).”

It was clear today that if Tadese had been alone without the threat of a challenge then the World record would very much have been in his scope. If and when that mark is beaten (58:33) then the whole of Eritrea will party once more.

Lornah Kiplagat having insisted in midweek that 20 kilometres and the Half Marathon were her best racing distances proved her self-belief with a stunning performance at the 2nd IAAF World Road Running Championships in Udine.

A confident Kiplagat absorbs her perfect day in Udine

Two World records**, a winner’s payment of US$30,000 and a World record bonus of US$50,000 can be described as a near perfect day for Holland’s Lornah Kiplagat at the IAAF World Road Running Championships which were contested today in this north eastern Italian city. 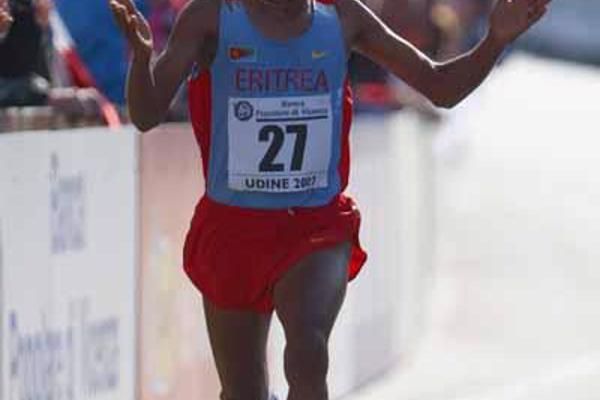