Josh McDougal of Liberty University and Sally Kipyego of Texas Tech won the men’s and women’s races in the NCAA XC Championships at the LaVern Gibson Cross Country Course on Monday (19).

McDougal beat Galen Rupp of Oregon in the men’s 10km in a thrilling homestretch battle, 29:22 to 29:23, over the two-circuit bumpy grass layout in cool, dry and overcast weather. Lopez Lomong of Northern Arizona was third in 29:45.

In the women’s 6km race, Kipyego led from the start to win in a course-record 19:30 for a 17-second victory over Colorado’s Jennifer Barringer in a repeat of the top two finishers from 2006.

McDougal became the first Liberty athlete to win a NCAA Cross Country title and ended a three-year string of national meet disappointments. He finished 13th as a freshman, fourth as a sophomore and 27th as a junior. He had been undefeated as a freshman and a sophomore until his setbacks in the NCAA meet.

After last year’s 27th place finish, McDougal evaluated his training programme with his coach Brant Tolsma. He had tapered from more than 100 miles per week to 48 the week of the competition and felt that he had lost fitness from backing off. McDougal ran 116 miles in the week leading up to Monday’s race.

“My speed is fine coming off hard training,” McDougal said. “I have honestly never ran really bad but never really had the greatest race. When you want to win a title you can’t just run well. You have to come out and run an amazing race.’’

Two-man race between McDougal and Rupp

After a tactical opening 5km, McDougal and Rupp separated themselves with 2km to go. McDougal opened a 10m lead with 1km before Rupp, the collegiate 10,000m record holder on the track and a 2007 U.S. World Championships team member in the event, surged past McDougal with 400m left.

McDougal and Rupp, who was cheered on by an entourage that included his personal coach Alberto Salazar and Nike co-founder and Oregon alumnus Phil Knight, ran side-by-side until McDougal opened a slight gap with 50m to go and flung his arms into the air as he crossed the finish line.

McDougal called Rupp one of his toughest competitors and didn’t think he could respond if the Oregon junior had surged again. McDougal said he almost lost his balance several times as he approached the finish line because of weariness running into the wind. “The last stretch seemed to get longer and longer,” McDougal said. “I was barely lifting my legs and expecting (Rupp) to come by any moment.”

Monday’s victory was the fifth national title for the Kipyego, the only Kenyan-born woman to win a NCAA cross country title. In addition to her two national cross country titles, Kipyego also won the indoor 3000m and 5000m and the outdoor 10,000m on the track.

Perhaps the most important title for Kipyego is in the classroom in her pursuit of her nursing degree. Kipyego, who represented Kenya in the 2001 World Junior Cross Country championships, said that she would turn down an opportunity to run in the Beijing Olympics because of conflicts with her classes at Texas Tech.

“I would really like to go to the Olympics but only if it is scheduled during a week when I don’t have summer school then I will go,” Kipyego said. “I am just too passionate with nursing compared to running.’’

If there was some consolation for Rupp, who equalled the highest finish by an Oregon runner since Salazar’s runner-up finish in 1979, it would be after leading the Ducks to their first NCAA title since 1977 with an 85-113 win over Iona.

The Stanford women, led by Arianna Lambie in eighth, won its third title in a row with a 145-177 win over Pacific-10 Conference rival Oregon.

The 23-year-old native of Narok, Kenya, cruised to a 25 second victory at the Division II championships in Joplin, Mo., to become the first collegiate athlete to collect four individual cross country titles at any level. Three others - Gerry Lindgren, Steve Prefontaine and Henry Rono - had tallied three victories each, all at the Division I level.

"It was a very competitive race," Naimadu said. "When I moved ahead with a mile or more to go and nobody came with me, I believed I would win."

Naimadu injured his knee in a fall at the Cowboy Jamboree in Stillwater, Ok., on 29 September, and finished second, bringing an 11 race win streak in cross country to an end. He raced only once since to fully recover in time for the national title chase.

BACK
Pages related to this articleAthletes
Sally Jepkosgei Kipyego 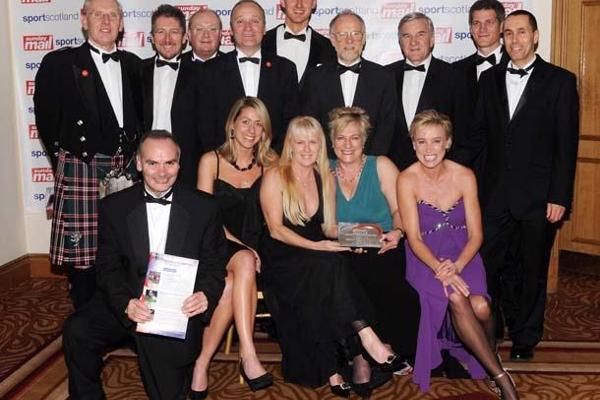 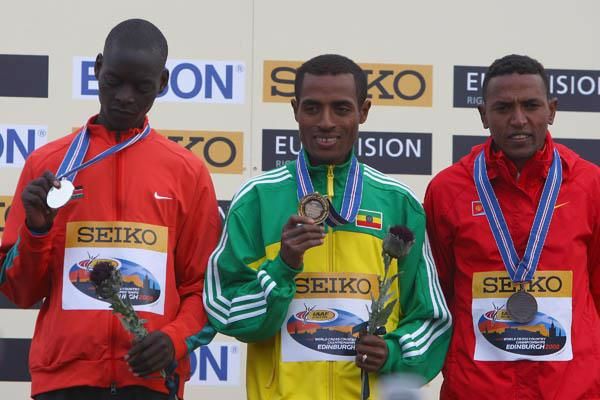 -&nbsp;Edinburgh, Scotland&nbsp;– The idea that Leonard Patrick Komon would go on to take the individual silver medal in the Senior Men’s race at the 36th IAAF World Cross Country Championships here today would have seemed faintly absurd to anybody hearing the suggestion midway through the Kenyan trial to pick the team four weeks ago.</P> 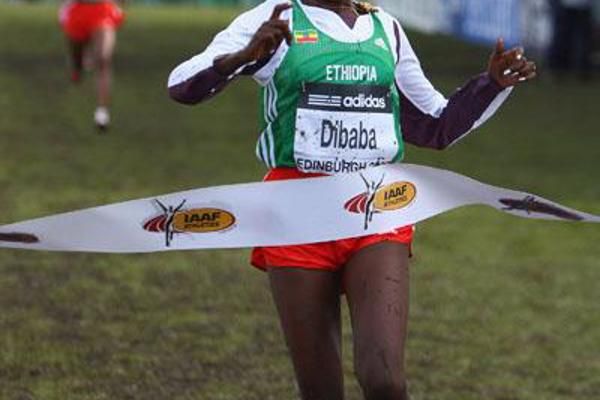 - As inspiration goes it takes some beating. Only minutes after becoming the most successful woman in the history of the IAAF World Cross Country Championships Tirunesh Dibaba stood in the flapping white tent that served as a media/athlete mixed zone in Edinburgh’s Holyrood Park and insisted it wasn’t her own victory that had painted the broad, joyful smile on her mud-spotted 22-year-old face.</P>