Nethaneel Mitchell-Blake brought the British Championships in Birmingham to a close by breaking the 30-year-old championship record to take his first national 200m title on Sunday (2).

In one of the most highly anticipated races of the weekend, Mitchell-Blake and European bronze medallist Danny Talbot came off the curve together, but the NCAA silver medallist found something extra in the closing stages to edge clear and stop the clock at 20.18 (0.8m/s) to eclipse John Regis’s championship best performance.

“This is the first time I’ve run in front of my home crowd and the experience is second to none,” said the US-based sprinter. “I am so pleased I have the opportunity to do it again in London. It was a great field and it was the last event for a reason; everybody stepped up and hopefully we can do the country proud now in London.”

Talbot crossed the line in a lifetime best of 20.20 to secure a place on the team for the IAAF World Championships London 2017. With everyone watching the centre lanes featuring Mitchell-Blake, Talbot, Zharnel Hughes and Adam Gemili, it was European U23 silver medallist Leon Reid who produced the biggest surprise of the race, smashing his lifetime best with a 20.38 run from lane eight to bag bronze. Hughes had to settle for fourth in 20.42 with Gemili was sixth.

“I knew I had some really strong girls outside me so I had to get out well,” said Hylton. “When I got to the straight I started to tense up but I pushed on through to the line. The conditions felt quite still, which helped, and I’m only coming back from a tough year of injury in 2016 where things didn’t quite go so well, so to bounce back in this manner is so pleasing.”

Four men in possession of the World Championships qualifying standard of 3:36.00 lined up for the 1500m final, knowing that only the top two would secure selection. Jake Wightman, winner at the recent IAAF Diamond League meeting in Oslo, tried to dictate the pace for much of the race with Olympic finalist Charlie Grice joining him at the front during the second half. But 2014 European bronze medallist Chris O’Hare timed his attack to perfection; once he hit the front on the last lap, no one was able to catch him.

O’Hare crossed the line first in 3:47.28. NCAA champion Josh Kerr overtook Wightman in the closing stages to grab the second automatic qualifying spot in 3:47.71 with Wightman just 0.03 behind. Grice wound up fifth, finishing behind 2015 European under-23 bronze medallist Neil Gourley.

“I won the British Champs in 2013 and since then it’s been a hassle to get back on top, but it feels really good to be back,” said O’Hare. “It was so tough out there and I spent a lot of the warm-up on the physio bed getting my hamstring sorted out as I kept cramping up.”

The day started with a national record in the men’s 5000m race walk. After world U20 champion Callum Wilkinson set the early pace, Olympic sixth-place finisher Tom Bosworth pushed on to win in a national outdoor record of 18:43.28, four seconds shy of the outright British best he set indoors earlier this year. Wilkinson also finished inside the previous record, taking second place in 18:56.96.

“To get two Brits inside 19 minutes is pretty special going into London [World Championships],” said Bosworth. “I’ve felt a lot of pressure this year to back up my result from Rio, so to go 17 seconds quicker than I did last year is really exciting.” 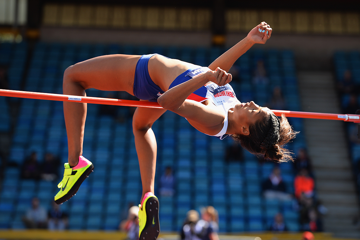