In 2014 Pierre-Ambroise Bosse was in the form of his life. The then 22-year-old set a French 800m record of 1:42.53 when placing second at the Monaco IAAF Diamond League meeting and headed to that year’s European Championships in Zurich as the overwhelming favourite for the 800m title.

Yet he could only manage a distant eighth, allowing a succession of athletes to pass him in the final stages following a first lap that was just too quick.

Fast forward three years and Bosse heads to another major championships, this time after a late start to the season following an injury and therefore not in peak condition. Yet, with a season’s best of 1:44.72, again set in Monaco, the Frenchman arguably has a better chance than ever to claim a global medal.

Having gone into World Championships in better condition and having ran faster times, but returned empty handed – he finished seventh in Moscow in 2013 and fifth in Beijing two years ago – could the IAAF World Championships London 2017 represent the 25-year-old’s best shot at a medal?

“Thank you. Why not?” he laughs. “A medal is always possible and even more so this year, because there’s no Rudisha. That’s the only point. I’m not talking about any athletes who aren’t here, but I’m talking about the great guy. With him, it’s a different race.”

To even make it to the start line can be considered a success for the 2012 European bronze medallist, following an injury-hit start to the year that almost ruined a winter training trip to Australia.

“I was already injured back in February (when in Australia),” he explains. “But I went there anyway because it was always my idea to go there for a training camp, even if I had to bring my physio.”

Despite the missed training, Bosse is confident that however the race plans out next week and whatever the weather, he will be able to respond.

“If it’s a sprint, I can run fast and I can be strong in a tactical race. My injury doesn’t feel painful, but I do need to warm up more,” he confirms. “The Kenyans are struggling more than me, because of the weather. I live in Paris, so I’m used to this weather.”

He is mindful, though, of the threat posed by others.

“The new guy, (Emmanuel) Korir and (Nijel) Amos are who we need to watch very carefully. It could definitely be a tactical race without Rudisha. But I know Nijel Amos personally. He’s kind of crazy and that’s why I love him. So, who knows what will happen.”

Another French athlete hoping to have timed her preparations right for a shot at a first global medal is Antoinette Nana Djimou. The 2014 European heptathlon champion has a record of success at European level and, with many of the favoured contenders hailing from that continent, is optimistic of her chances.

That record, 6889 points set by Eunice Barber in 2005, would surely be enough for a medal, if not gold, but the three-times world finalist acknowledges that securing the required points won’t be easy.

The 32-year-old, who recently relocated to Montpellier where she trains with Britain’s Katerina Johnson-Thompson, at least has a home advantage of sorts

“London is good,” she grins. “It’s similar to France and it is good for me because my boyfriend is English (British Taekwondo athlete Mahama Cho), so I feel like it’s my home.” 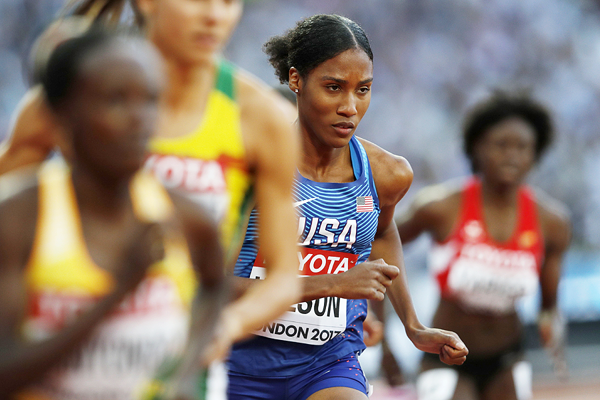