Standing in the mixed zone shortly after Ajee’ Wilson sprinted to an 800m bronze medal at the IAAF World Championships London 2017, her coach, Derek Thompson, casted his mind back six years to the day he first laid eyes on the teenage prodigy.

“I knew she was special early on,” says Thompson, a former Jamaican football international who is based out of Temple University in Philadelphia, USA. “I’ve had some good ones but she’s special.”

Fans of the US middle-distance prodigy have also known that for years.

Wilson grew up in Monmouth County, New Jersey, and her first memories of the sport involved running through a local graveyard to do sessions at her local track. Her early development owed as much to nature as nurture – her father, Zacahry Snr, was a sprinter and college football player, while her first races came at the age of nine against her mother, Tonya, who did the 400m, 800m and high jump.

In her early teens long-distance running was Wilson's speciality, but with each step down in distance she realised her natural speed and power gave her a massive edge over rivals.

At the age of 16, she was picked to run at the IAAF World Junior Championships in Moncton, Canada, which was where her world-class ability first emerged, Wilson finishing fifth in the 800m in 2:04.18 against older, more experienced athletes.

The following year she hacked her best down to 2:02.64, which she ran to win the IAAF World Youth Championships in Lille, France.

That was the year she first came into contact with Thompson, who has been tasked with a pivotal role ever since to nurture her ability to success in the senior ranks.

On race days Wilson’s routine is typically to arrive several hours early then find a spot to lie down and sleep, and her coach admits that sometimes he worries she’ll sleep right through her race.

But once Wilson steps on the track, the natural fluidity of movement she was gifted with, along with the careful honing of ability which she and Thompson have worked so tirelessly on, becomes apparent.

Watching on, you could easily be duped that this all came easy to Wilson, but that’s not the case.

In 2012 Wilson smashed her personal best to win gold at the IAAF World Junior Championships in Barcelona, running 2:00.91, and back then she appeared to be on an unstoppable ascent to the top of her sport. The following year she set a North American U20 record when running 1:58.21 to finish fifth at the IAAF World Championships in Moscow, but the much-awaited senior medal many had deemed inevitable would be a long time coming.

In 2015 it appeared her time to take over was arriving when she finished second at the IAAF Diamond League meeting in Eugene in 1:57.87, but a stress reaction in her tibia that summer ruled her out of the IAAF World Championships in Beijing.

“I was disappointed to be sat at home watching the races,” she said. “I really wanted to be there.”

The Olympics, she thought, would be better, though after struggling with injury Wilson did not ease to victory at the US Championships as expected, but finished runner-up to Kate Grace in 1:59.51. In Rio, Wilson was drawn in a tough semi-final alongside Margaret Wambui of Kenya and Francine Niyonsaba of Burundi, and after a slow early pace she fell victim to the strict first-two qualification criteria when finishing a close third in 1:59.75.

Both she and Thompson knew, however, that better things lay in waiting. In recent years Wilson had combined training with her kinesiology studies at Temple University, but graduating from there cleared the path for full-time training in 2017.

Training for prolonged periods at 1500m pace was crucial, explains Thompson, for Wilson to survive the rounds of a major championship and still have enough left to flourish in the final. In Wilson, he has always had an athlete willing to listen.

“Ajee’ is one of those athletes that does what you ask her to do,” he says. “An easy person to coach.”

At the IAAF Diamond League meeting in Monaco last month, Wilson smashed the US record by running 1:55.61 to finish third behind Niyonsaba and Caster Semenya of South Africa, the Olympic champion.

In London she breezed through the heats and semi-final, and heading to the final Thompson sat her down with a specific race plan to target gold.

“My coach always says that everyone is beatable,” said Wilson. “Whenever I toe the line, I’m ready to go, ready to race. My coach told me to get out and if I found myself in the lead, cool, but if not then don’t fight for it. With 200 to go he told me if I felt good, go for it.”

That’s pretty much how it played out, Wilson sprinting through the first 100 metres but settling in behind Niyonsaba when the Burundian hammered to the front approaching the second turn. They passed the bell in 57.98, a steady but sustainable pace.

Semenya, she knew, had a fearsome final kick, so as Wilson approached the final turn she kicked it into gear and tried to steal a march.

“I was ready for the final charge,” said Wilson. “I knew [Semenya] was coming so it was just a matter of when. Coming off the last turn I saw that the three of us had pulled away so I was just like: ‘Hey, go for it'.”

Semenya came charging past both Wilson and Niyonsaba in the home stretch, though Wilson fought to the line to ensure a bronze medal in 1:56.65, her first at senior level in a global outdoor championship.

“I’m super excited with my performance,” she said. “I couldn’t be happier. I wish I could have gotten gold but that’s what I had today.”

The champion was gracious in victory about Wilson’s effort in defeat. “She’s a great athlete, a fantastic runner,” said Semenya, who clocked 1:55.16. “You want the best from your opponents and I’m thrilled to run with her.”

And despite all her success to date, Thompson believes Wilson’s best days are ahead.

BACK
Pages related to this articleAthletes
Ajee WILSON 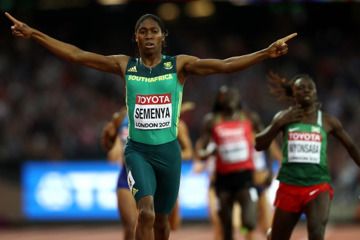 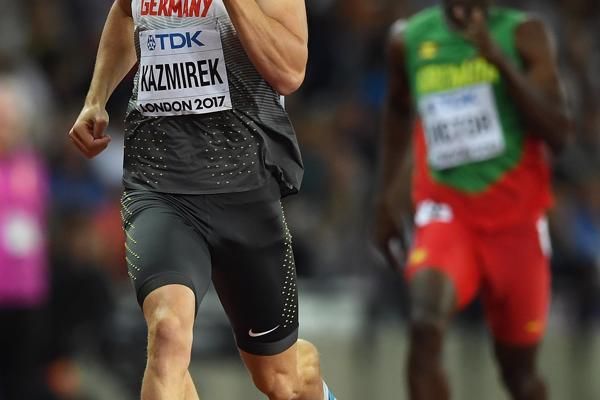 Rocky road to London pays off for Kazmirek

Decathletes – they’re an injury-prone lot at the best of times, athletes who put their bodies through the ringer by juggling training loads for 10 different events.