When Christian Taylor cut the sand 17.86 metres from where he had taken off on his fourth attempt in the triple jump final, he did more than deprive his teammate and career-long rival Will Claye of another – yet another, Claye might add – major gold medal.

Taylor would increase his best to 17.92m in the next round, but in taking a lead he would never relinquish he also took the honour of winning the 100th gold medal for USA men since the inaugural IAAF World Championships in Helsinki in 1983 (where, ironically, another great US triple jumper, Willie Banks, was upstaged by Zdzislaw Hoffman of Poland in the triple jump).

"USA track and field has a strong history in the sport and strong presence," said Taylor. "Wearing the uniform, there's a level of respect that we get from our competitors but also a lot of pride that we take when wearing it.

"To win the 100th gold medal by a US man, how can I not be proud? It's really the icing on the cake and adds to the phenomenal competition that I got to be a part of. To have that as part of my story, really I'm proud of it."

Statistics from Mark Butler, editor of the official statistics handbook for the championships, tell us the USA men’s tally stood at 98 at the start of this World Championships. Christian Coleman made it 99 with his win the 100m on day two and then Taylor brought it up to 100 the following day.

In the same time, and with fewer competitive opportunities, US women have won 58 gold medals, 57 plus DeAnna Price in the hammer, and the USA has now won the first gold medal in mixed competition in the mixed 4x400m.

Taylor has made a solid contribution to that tally, of course. His win here took his personal gold medal tally to four, so he has contributed his fair share.

"Looking back, Angelo Taylor (three World Championships gold medals in the 4x400m) and Dwight Phillips (four world long jump titles) inspired me," said Taylor. "They were both from Atlanta, like me. Dwight is a jumper, while Angelo has the Taylor surname. What they did on the grand stage was phenomenal and really inspirational."

Carl Lewis, the man who started the US gold rush with his win in the 100m in Helsinki is the major single contributor with eight gold medals, five individual and three relay: the 100m, long jump and 4x100m in Helsinki, the same treble in Rome four years later, and the 100m and the relay in Tokyo in 1991.

One of the most memorable gold medal competitions involved Carl Lewis, but was one he did not win. In the long jump in Tokyo in 1991 Lewis was upstaged by Mike Powell, who not only pinched the gold medal from under King Carl’s nose, but also beat him to breaking Bob Beamon’s legendary world record.

Lewis got within centimetres of Beamon’s 8.90m with one of his early attempts. He pulled his track suit back on and sat down on the infield beyond the end of the pit, focused solely on the world record.

If that’s the case, Lewis forgot about the competition – perhaps an understandable mistake for a man who rarely been beaten and given the fact no man had ever jumped beyond 8.80m and lost.

Powell until then was such a mercurial competitor, too. Like Beamon, his approach to the event was simple: run down fast, jump as far as you can. This night it served him well, he exploded out to 8.95m. The record and the gold medal was his.

Mike Powell sails to his 8.95m world record leap at the 1991 World Championships in Tokyo

There are many other memorable moments, too, some for an individual moment of brilliance, others for a sustained career of performance at the highest level, still others for the sheer unexpectedness of it.

Among the latter would definitely be the win by Mark Plaatjes in the marathon in Stuttgart in 1993. South African-born, Plaatjes had become a US citizen only the previous year. He came past long-time leader Lucketz Swartbooi of Namibia in the final kilometre to take the gold.

“I felt terrible passing Lucketz,” he said. “He did so much work and was brave to take the race out and destroy the field.”

Two of the greatest hurdlers ever – Greg Foster and Allen Johnson – are prime examples of sustained brilliance. Foster won the 110m hurdles at the first three championships, a reign of eight years; Johnson matched that longevity, winning in 1995, 1997, 1999 and 2003.

For sustained brilliance within a single event what about super decathletes Dan O’Brien and Ashton Eaton. O’Brien won three in the trot in 1991, 1993 and 1995; Ashton won two ‘only’ but who can forget his stunning 45.00 400m to close day one on his way to a world record victory in Beijing in 2015.

The rate of medal winning has slowed in recent times – 10 in Osaka in 2007, six in Berlin in 2009 and Daegu in 2011, four in 2013 and 2015, three in London in 2017 and two, so far, in Doha – in part due to many international rivals spending their formative senior years within the US collegiate system, in part due to the increasing globalisation of athletics.

It may take another 36 years for US men to win their next 100 gold medals, but following the first 100 has been quite a ride. 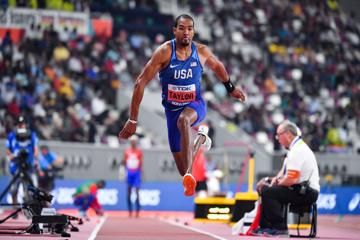