Tajay Gayle at the World Championships in Doha (© Getty Images)

Meet Jamaica’s newest star who produced the jump of his life, the tenth best of all-time, to win the men’s long jump at the World Athletics Championships Doha 2019.

The multi-talented Gayle hails from August Town, a tough inner-city community in Eastern St. Andrew, where life can be a daily struggle. Track and field saved him.

We are sitting in the lobby of the opulent Curve Hotel in Doha and the usually laid back Gayle uncharacteristically moves closer to the recorder and, like a history professor, spoke about his journey for 48 uninterrupted minutes.

It all started at Papine High School, the same institution that produced 2016 World U20 champion Tiffany James. However, the soft-spoken Gayle, unlike his celebrated teammate James, was a late bloomer who competed in several events before finding his niche.

“I started as a sprinter,” said Gayle. “I did not take the sport seriously my first three years in high school. I was not training properly; I was going there to have fun. However, Coach Shanieke Osbourne saw something in me that I did not see. From then I trusted her and did what I was told.”

He first competed at the Jamaican High Schools’ Boys and Girls Championships in tenth grade contesting the high jump. The following season he began to show a deep affection towards the long jump and added it to his range.

“I was always winning the long jump at our annual school sports day and perhaps that’s what Coach Osbourne saw and started to encourage me. I prefer the long jump over the high jump because the high jump is too technical and I don’t like to turn my back to stuff,” Gayle said with a chuckle.

Gayle failed to make either the horizontal or vertical jump finals at the ISSA Boys and Girls Championships in 2014. The following year, his final time competing at the championships, he bowed out showing his vast repertoire. “My coach told me that I can excel in any event. She pointed out that I am a very technical person and a fast learner and she wanted me to try the decathlon.”

Tajay Gayle at the 2018 Commonwealth Games

After amassing 5987 points to finish seventh overall, he was quite happy to create history as the first male to contribute points for his school at the annual championships. Gayle highlighted that the performance that stood out for him in the gruelling contest, though wind-aided, was the 6.94m in the long jump.

After leaving Papine High, he enrolled at the University of Technology, an institution renowned for producing world-class athletes, but just like in high school, he began competing in the high jump. One day his watershed moment arrived, fortuitously.

“I turned up for practice and noticed that the high jump mat was wet. I turned to the coach and said it does not look like I am going to train today because there is no landing area. He instructed me to do some long jump practice instead. I went over and joined the group who were doing some twelve strides run ups. I remember jumping 7.29m that day which was a big surprise because my PB before that was 6.54m.”

On 11 February 2017, Gayle joined the eight-metre club, but could not attain the qualifying standard for the London World Championships. Gayle developed into a fierce competitor in 2018 and after a fourth-place finish at the Commonwealth Games, he won silver at the NACAC Championships in Toronto where he leapt 8.24m, a then lifetime best.

The newly minted world champion had an auspicious start to his 2019 season winning his first four competitions. His first victory at the Grenada Invitational in April, where he cut the sand at 8.20m, came as a cameo appearance because he was in a race against time. “I only had two jumps, 8.04m and 8.20m and then I had to leave because I had a plane to catch. My flight was departing in three hours.”

A month later, he travelled to China where he carved out two important victories, one at the IAAF Shanghai Diamond League and another 48 hours later at the inaugural Nanjing World Challenge meeting, which took place separately as a “street meet” at a local shopping mall. “This was the best meet for me,” said a delighted Gayle, who won off his last attempt with 8.21m.

“Everything about the meet was nice. The large crowd was very close, so you could feel the energy, the lights and music were just awesome. It was a great experience and I would like to jump at another street event.”

There was a great street long jump set up for the inaugural Nanjing World Challenge tonight. Tajay Gayle got the win with 8.21m. A few scenes and jumps, including Gayle’s final round winner: pic.twitter.com/hYrJcVKqFl

Ten days later at the Bauhaus-Galan IAAF Diamond League meeting in Stockholm, Gayle endured a chilling encounter that almost froze his soaring ambitions. “The Stockholm meet was very, very, very cold. I tried my best to take the conditions off my mind but it was too cold. I jumped a wind-aided 8.05m, finished fifth and strained a tendon under my right knee. That night my leg was swollen, and I was unable to walk freely. It took me over an hour to get to the physiotherapist downstairs, but thankfully a lady, who thought I was dying, stood by me the whole time until my physiotherapist came.”

A fast healer, Gayle recovered sufficiently to chalk up some solid performances including winning the Jamaican national title, his first after three attempts, followed by a lifetime best of 8.32m at the Müller Anniversary Games in London and a silver medal at the Pan-American Games in Lima, Peru, behind Cuban sensation Juan Miguel Echevarría.

“Even though it was cold and I was slightly loaded, I had a big jump which was ruled a foul by a toenail, but I didn’t let it get to me, I took the decision and moved on from there knowing I was right where I wanted to be.”

Training through the Diamond League final

The Diamond League final in Zurich served as a final warm-up encounter before the World Championships. However, Gayle admitted his goal was not achieving the lucrative prize. “I was never prepared to win that meet. My focus was Doha, and I was still loaded.”

The 23-year-old spent the next three weeks practising the hitch kick technique and arrived in Doha with full confidence.

His campaign almost ended prematurely as he only qualified in last place for the final. “When I jumped 7.89m, I started to get nervous wondering if I made the finals. I am near-sighted and so I could not see the scoreboard clearly. It was my close friend Henry Frayne from Australia, who came and told me that I had qualified.”

Notwithstanding, Gayle was grateful and promised a better showing in the next round. “Honestly, I am not sure what went wrong. My coach (Stephen Francis) and I had been practising some different flight techniques and landings recently. Maybe I was overthinking that part too much and forgot about my run-up as I made a few mistakes. I was happy to make the final though because I was going to give it my all even if I ended up pulling a muscle.”

With the mistakes in qualifying shelved, Gayle did not bother clouding his mind with executing all areas of his technique when he looked down the runway for his opening round. He concentrated on one thing only, which was the advice drilled inside his head by Francis. “Your run-up is the main thing; use your speed against them.”

Tajay Gayle at the 2019 World Championships

“I was the third jumper, I expected to be first, and I told myself that I was going to get this on my first jump. I also did something out of character, I started to walk around and point to the crowd to get some vibes. Afterwards, I started talking to myself saying speed and power, speed and power. Then I took off.”

His first-round effort of 8.46m improved his PB by 14 centimetres and catapulted him into the lead. However, when he uncorked his 8.69m in the fourth round, he killed the competition stone dead.

“As a jumper, you feel the difference between jumps. On this jump, I felt the speed, I felt the last two steps and height and when I landed, I heard the crowd roar and I said this is a big one and did not even bother to look back. Afterwards, I did not try to prove anything by jumping again once I realised no one could challenge my mark, so I skipped my fifth and six rounds because winning was all that mattered to me.”

After his victory, a number of his competitors were singing his praises including dethroned world champion Luvo Manyonga of South Africa.

“Wow! I saw it coming,” Manyonga said. “I have been watching him throughout the season and he is so calm and collected. He is that underdog but when it comes to competition, he is just talking to himself, very composed and doing what matters. I was expecting something from him but not that far; it caught us all by surprise.”

BACK
Pages related to this articleAthletes
Tajay GAYLE 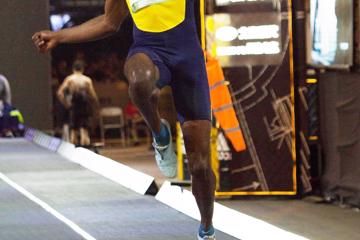 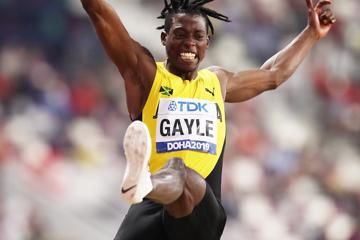