The last few moments of the IAAF World Championships Beijing 2015

It's all over now. As the last medals are being distributed, here are a few last moments from day nine at the IAAF World Championships Beijing 2015.

The lead in the women's javelin final changed more times than a Beijing traffic light. Sunette Viljoen took it in the fourth round at 65.79m, and Lyu Huihui in the fifth at 66.13m. Then Katharina Molitor, who had led before Viljoen, came up for the final throw of the final round.

Katharina Molitor in the javelin final at the IAAF World Championships, Beijing 2015

Molitor capped the whole competition with a whopping 67.69m mark to take the gold from Lyu at the last possible moment. Seldom has the javelin final been quite so focused on a single throw.

When the high jump bar reached 2.36m with five jumpers active, it was tense. When none of the five cleared, leaving Bogdan Bondarenko, Zhang Guowei and Derek Drouin tied for first, it was tenser.

The jump-off saw all three miss again at 2.36m before the bar came down to 2.34m. There, Drouin cleared, and when he saw Bondarenko and Zhang miss, he had the gold.

The closest marathon in World Championship history saw four runners entering the tunnel to the stadium together. When they came out, it was two; when they reached the finish line, it was one, Mare Dibaba, the fastest marathon runner in the world this year and now the world champion.

After 26 miles of attrition, Dibaba (no relation to Genzebe) barely slowed down as she whipped into her lap of honour.

Genzebe Dibaba was the world record-holder and 1500m world champion. Almaz Ayana was the fastest 5000m runner so far in 2015. Ayana set a strategy that caught Dibaba, in her fourth race of the week, flat-footed: a long drive from 3000m out.

Ayana sailed to victory in a championship record of 14:26.83 (the old record belonging to Dibaba's older sister Tirunesh) and Dibaba faded to bronze behind team-mate Senbere Teferi as Ethiopia completed their second sweep of the women's 5000m medals. Ayana’s final 3000m was covered in 8:19.91.

Makhloufi and Iguider ended fourth and third respectively. Kiprop became the three-time world champion and those who reached found the gold beyond their grasp.

Jamaica’s four individual 400m finalists teamed up to take gold in the 4x400m, overtaking USA on the final stretch.

But the USA would have been out of contention even earlier in the race had it not been for world 400m champion Allyson Felix clocking a 47.72 split – the third fastest in history – in her sixth and final race in Beijing to give USA the lead going into the final leg.

It was a phenomenal set of relays for Trinidad and Tobago, who took bronze in the women's 4x100m and then led all three exchanges in the men's 4x400m. And it was LaShawn Merritt who took the day in the end, as the USA – who had won eight 4x400m relays in 14 World Championships – put their biggest man on the last leg.

LaShawn Merritt and Javon Francis in the 4x400m at the IAAF World Championships, Beijing 2015

But the real heroics came from Jamaica’s Javon Francis, who took his team from fourth to first in the space of a few metres on the back straight of the final leg. He missed out on the bronze medal by four thousandths of a second as Jamaica was credited with the same time as Great Britain in third, 2:58.31. But Francis can take some consolation in the fact that his 43.52 split was the fastest of the day. 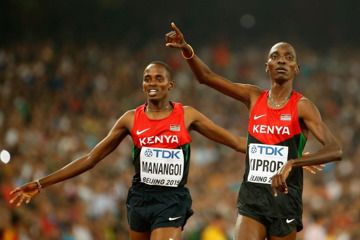 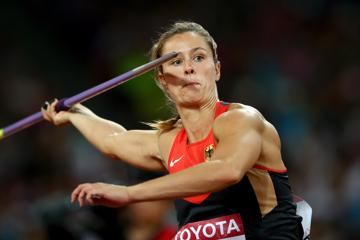 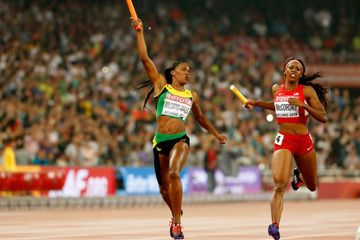