Ehsan Hadadi got Iran’s first gold medal of the athletics programme when he won his third successive discus title on the fourth day of the athletics at the Asian Games in the South Korean city of Inchon on Tuesday (30).

The Olympic silver medallist dominated the competition and won with his second-round toss of 65.11m, just shy of his season’s best of 65.23m although he was some way short of his Games record of 67.99m set four years ago.

In fact, four of Hadadi’s five valid throws would have been enough for victory as India’s Commonwealth champion Vikas Gowda was unable to mount a serious challenge.

Gowda reached 62.58m in the second round but fouled his last three attempts while desperately trying to find the extra metres that would put him into pole position.

China took the other three events that were decided on Tuesday.

Long jumper Li Jinzhe was nowhere near his best but the world indoor silver medallist didn’t need to be as he led after the first round with 8.00m and then improved by one centimetre in round five for the the shortest winning distance since 1986

South Korea’s Kim Deokhyeon jumped 7.90m with his final effort to move up from fifth to second and take the silver medal.

With only six competitors, the women’s pole vault was over surprisingly quickly by international standards and China’s Asian record-holder and recent IAAF Continental Cup winner Li Ling only needed to clear 4.35m to get the gold medal.

With a best of 4.65m, she was the overwhelming favourite and went over her winning height at the first time of asking to equal the Games record set 12 years ago by her compatriot Gao Shuying.

With no one else left in the competition, Li then had the bar moved up to 4.50m but had three failures.

The men’s 110m hurdles, the last event of the night and the only track final on Tuesday, was won by Xie Wenjun in 13.36. Xie's victory was China's eighth successive Games win.

The best performance of the day actually came in a preliminary round.

Bahrain’s Kemi Adekoya got her second Games record in Inchon when she sped to a time of 55.09 in her 400m hurdles heat, taking 0.17 off the mark of China’s Leng Xueyan which has stood since 1994.

Adekoya will be the big favourite to add the hurdles title to the one she got in the flat 400m on Sunday, as no one else ran within two-and-a-half seconds of that time in the morning heats.

Uzbekistan’s Leonid Andreyev, the silver medallist at the past two Asian Games, leads overnight in the decathlon with 4215 points after a first day which saw personal bests in the shot put and 400m and a high jump which equalled his best.

Japan’s Akihiko Nakamura is 92 points behind with 4123 but was let down by a poor shot put, and only had a best of 11.75m, exactly four metres behind Andreyev’s top effort.

Nakamura’s compatriot Keisuke Ushiro lies third with 4073 points while Kazakhstan’s 2006 and 2010 Asian Games champion and reigning Asian champion Dmitriy Karpov is in the unfamiliar position of being down in fourth place with 3987 points.

BACK
Pages related to this articleAthletes
Leonid Andreev 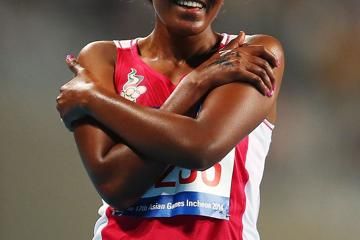 Mohammed gets the 2014 Asian Games athletics ... 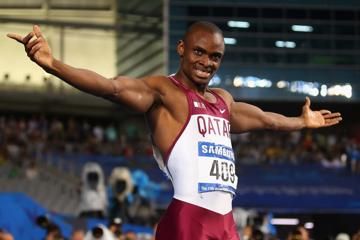 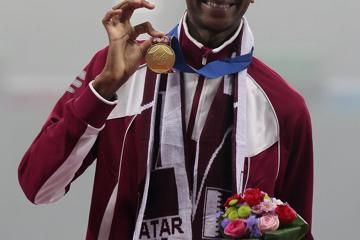