Poland's Anita Wlodarczyk in action in the hammer (© Getty Images)

For the first time in its history of 89 editions, the Polish National Championships were hosted by the city of Torun this weekend (19-21 July).

Helped by pleasant sunny weather, several of Poland’s World Championship hopefuls achieved results confirming their medal ambitions. Chief amongst those was Anita Wlodarczyk’s Hammer throw of 76.93m and Piotr Malachowski’s 66.87m in the Discus. Other notable performances included Artur Noga’s 13.29 in the 110m Hurdles and Anna Rogowska’s vault of 4.55m.

The best result of these championships came in the very first final. Anita Wlodarczyk started the Hammer competition on a high note with 75.66m, but it was in the second round that she really came good.

Her 76.93m was not only a championship record, but it also put her second on the world list this season, marginally behind Russia’s Oksana Kondratyeva. Underscoring her consistency, Wlodarczyk had a total of four throws in excess of 75 metres in the competition.

Piotr Malachowski confirmed his World Championship ambitions with a comfortable win in the Discus final. His first-round 66.87m gave him his eighth national crown. Robert Urbanek finished in second place with a season’s best 65.30m.

In contrast to the women’s Hammer Throw, the men’s competition resulted in a major upset, as Pawel Fajdek, fifth on this year’s world list, was unable to do better than 75.22m, which was only good enough for bronze.

Former World and Olympic champion Szymon Ziolkowski took advantage of the younger rival’s sub-par form to take his 14th national title with a best of 77.74m and four more throws over 76 metres. Wojciech Nowicki was the runner-up with 75.64m.

There was no such upset in the men’s Shot Put. Double Olympic champion Tomasz Majewski was in second place behind Rafal Kownatke after round one, but quickly established his dominance with 20.69m on his next attempt. That remained his best effort, although the remainder of his throws were all well in excess of 20 metres. His last was clearly over 21, alas, he did not manage to stay in the circle.

Hubert Chmielak was the surprise champion in the Javelin Throw with a personal best of 80.28m, achieved in the fifth round. The pre-competition favourite Lukasz Grzeszczuk was the runner-up, more than two metres behind the winner.

Anna Rogowska was the dominant winner of the Pole Vault. Entering the competition only after all her rivals had been eliminated, she started with a first-time clearance of 4.35m and followed that with a terrific vault at 4.55m, sailing more than 20cm above the bar. This, however, was all she could do on the day, as all three attempts she took at 4.65m proved unsuccessful.

The men’s contest was a more closely fought affair. Lukasz Michalski won his fourth successive gold with a season’s best of 5.60m before three failed attempts at the World Championships ‘A’ qualifying mark of 5.70m. Przemyslaw Czerwinski took the silver with 5.55m.

The women’s High Jump competition was notable for the defeat suffered by the national record-holder and World University games champion Kamila Stepaniuk. On this occasion, she could do no better than 1.89m and finished down in third place. Justyna Kasprzycka, another woman with an ‘A’ qualifying mark for Moscow, took the title with 1.92m ahead of Urszula Gardzielewska, who cleared 1.89m.

Another Universiade medallist, Anna Jagaciak, had a better time in Torun with an easy win in the Triple Jump. Her 14.20m was just off the mark she set in Kazan. Jagaciak also took second place in the Long Jump with 6.50m, behind Teresa Dobija’s 6.58m.

Noga the best of the track athletes

The most significant result on the track came in the 110m Hurdles. After winning his heat in 13.49, European bronze medallist Artur Noga took the final by running exactly two-tenths of a second faster. His 13.29 was just 0.02 off the Polish record that Noga shares with Artur Kohutek.

Karol Zalewski and Marika Popowicz dominated the sprints, each taking two individual titles. Zalewski, the current European under-23 champion at 200m, took a clear victory in the shortest sprint with 10.31 on Friday and was the runaway victor at his specialty distance on Sunday; his 20.49 was the second-fastest time of his career.

Popowicz won the 100m with a personal best of 11.29 and the half-lap with 23.24, achieving the World Championships ‘B’ qualifier in both events.

The highly competitive men’s 400m final ended in a victory for Marcin Marciniszyn, who became the national champion for the seventh time in his career with 45.98, just 0.03 ahead of Kacper Kozlowski, with Lukasz Krawczuk (46.13) third.

Both 1500m finals were closely fought battles as well. Renata Plis took the women’s race in 4:09.30. On the men’s side, former European 800m champion Marcin Lewandowski made the pace for most of the race, but was overtaken by several rivals on the final lap.

Despite a strong finish, he was unable to catch Krzysztof Zebrowski, the winner in 3:38.94. Lewandowski, only 0.04 behind, was rewarded for his effort with a silver and an outdoor personal best.

The men’s 20km Race Walk was dominated by athletes better known for their exploits at the 50km distance. Artur Brzozowski was the winner with a personal best 1:22:16, 26 seconds ahead of Olympic ninth-place finisher Lukasz Nowak. Agnieszka Dygacz won the women’s race by more than two minutes in 1:30:58. 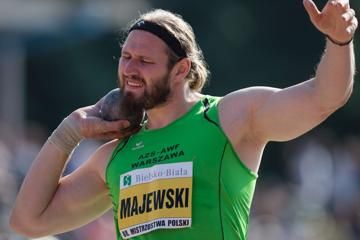