The Chinese outdoor season started at the weekend (27-28) in Zhaoqing, Guangdong Province, with some surprisingly good results.

As usual in China, the women’s throwers were strong, even in the absence of World Hammer bronze medallist Zhang Wenxiu and World Discus champion Li Yanfeng. In the Javelin, 23-year-old Lu Huihui set an Asian record of 65.62m to defeat Li Lingwei (60.87m).

It meant that Lu regained the Asian record that she lost to Li, after her 64.95m from this meeting last year was bettered by her compatriot two months later with 65.11m. Lu, who finished fifth at last year’s Olympics, now moves to second on the 2013 world lists behind World champion Mariya Abakumova’s 69.34m.

On the track, the spotlight was on 26-year-old Zhang Peimeng, who had already shown his class indoors this year when breaking the national indoor 200m record (20.75) and setting a 6.58 PB for 60m. The Beijing athlete has been a promising sprinter since 2007, when he progressed to 10.27, but never really fulfilled those promises until Saturday afternoon.

Despite his good form, Zhang wasn’t even the favourite to win the race. Instead, all eyes were on Guangdong athlete Su Bingtian, who was running before the home crowd and had set 6.55 60m national indoor record in March. The 23-year-old also held the 100m national record with 10.16 from 2011 and ran a wind-assisted 10.04 last season.

But in the final Su could not respond to Zhang’s strong performance. Even the TV cameras were all directed at Su running in lane six, but from half way it was clear that Zhang in lane three would be the winner.

He clocked 10.04 (1.6m/s) to set a national record, cutting a massive 0.12 seconds off the previous mark and equalling Michael Rodgers’ world-leading time (which was bettered two days later by Japanese teenager Yoshihide Kiryu). Su was second in 10.23 and Chen Qiang third in a PB of 10.29.

Olympic bronze medallist Gong Lijiao had a convincing outdoor debut with a 19.97m toss, her best ever start (previous one 19.86m in 2011). Fellow Olympic finalists Liu Xiangrong and Li Ling finished second and third respectively with 18.48m and 17.77m.

World finalist Tan Jian won the Discus with 62.56m to beat Song Aimin (61.65m), while 20-year-old Gu Siyu was third with a 60.93m personal best. In the Hammer, 21-year-old Wang Lu emerged as a surprise winner with a 69.39m PB, more than three-and-a-half metres farther than her previous best.

On the men’s side it looks as though the 200m national record could also be bettered this season. 19-year-old Xie Zhenye – who finished fifth at the World Junior Championships last year and already shares the national record with 20.54 from 2012 – set a 100m PB with 10.31 on Saturday and then won the 200m in 20.71, just 0.17 seconds slower than the national record in his first race of the season.

In the 110m Hurdles, Xie Wenjun – the current Chinese No.1 in the absence of Liu Xiang – started his 2013 season well. The 22-year-old won in 13.44, just 0.10 off his 13.34 PB from the London Olympics semi-finals. Jiang Fan was second in 13.57 and newcomer Lu Anye third in 13.67 personal best. Most Chinese athletes tend to achieve good results at an early age, but Lu is different as he only began competing in national-level competitions at the age of 20 and has slowly progressed to the top.

Wang Yu – the 21-year-old who jumped 2.30m indoors this year – opened his outdoor campaign with a 2.24m win in the High Jump. National record-holder Yang Yansheng won the Pole Vault with 5.40m, but the second and third best vaulters in the country, Xie Changrui and Zhang Wei, were not competing.

The Chinese season will continue with another National Grand Prix in Jinan 11-12 May and the National Games will start with the Race Walking competitions in Shenyang, Liaoning Province 10-12 May and Marathon in Yingkou (Liaoning) on 18 May. 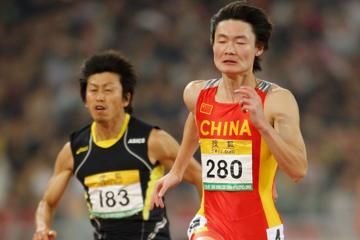 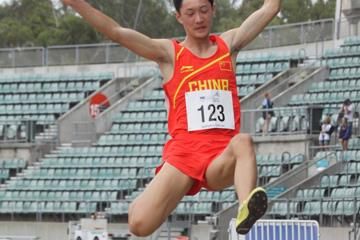