Scarcely had Japhet Korir crossed the line in Bydogoszcz’s Myslecinek Park two weeks ago to become the youngest IAAF World Cross Country Championships senior men’s champion than he revealed his main aim for 2013.

“Yes, 5000m is the distance I will concentrate on during the summer,” said the 19-year-old Kenyan. ”I have had success as a junior at big Cross Country championships but I have not been to a big championship on the track; that is my next ambition.”

Korir will get his first chance to further that ‘next ambition’ when he runs the 5000m at the Melbourne World Challenge, the first of this year’s IAAF World Challenge meetings, on Saturday night.

US sprinter Wallace Spearmon is at the opposite end of the experience spectrum to Korir.

Although he’s still only 29, Spearmon is a three-time IAAF World Championships medallist in the 200m and the seventh-fastest all-time over the distance with 19.65.

However, neither the men’s 5000m nor the 100m is the deepest event in Melbourne, an  accolade that goes to the men’s Long Jump where, after a false start in Perth three weeks ago, the match-up between London 2012 Olympic Games gold and silver medallists, Greg Rutherford and Mitchell Watt, will finally happen.

Melbourne prides itself on its middle and long-distance reputation. Korir and his compatriot James Magut add to a long tradition of Kenyan stars competing at the meeting.

It all started right in Albert Park, when the Kip Keino came out to race Ron Clarke over 5000m at the end of 1965. No blue synthetic track: the world’s two best distance runners raced on a grass track marked out on an Australian Rules football ground, with the legendery Keino winning in 13:40.6.

Korir will face two Australians he beat in Bydgoszcz,  Liam Adams and Mitch Brow, but his most intriguing domestic rival is Ryan Gregson.

The Australian 1500 metres record holder won Auckland’s Queen Street road Mile on Easter Monday. His relatively modest 5000m best, 13:37.12 set earlier this year in Hobart, may be due for a significant revision. Whether he is ready to stick with Korir, who has a best of 13:11.44 set indoor last year, remains to be seen.

Magut, a 3:33.31 1500m performer, will run the 1500m against Australians James Kaan and Josh Wright, who both broke into 3:37 territory at the recent Sydney Track Classic.

Kelly Hetherington has been alone at the front of the women’s 800m this season in Australia. In Melbourne, however, her event is boosted by the presence of Zoe Buckman, the London 2012 Olympic Games 1500m semi-finalist, who is dropping down in distance after a recent personal best at 3000m., Kenya’s World youth and World junior semi-finalist Agatha Jeruto and New Zealand’s 21-year-old 2:00.67 performer Angela Smit will also be on the start line.

Spearmon could snatch record from under Powell’s nose

Plans for Asafa Powell to run in Melbourne were scuppered by a small tear in his hamstring muscle sustained at the Stawell Gift, but organisers found a ready-made replacement in Wallace Spearmon.

Given his form at the Texas Relays last weekend, the 29-year-old American could also replace Powell as holder of the fastest 100m run in Melbourne.

Spearmon ran a windy 9.92 in Austin and, if he has recovered from a knock on the head as a result of a post-race fall, he could come close to the 10.03 Powell ran to win at the 2006 Commonwealth Games.

“I ended up on my head after crossing the line,” joked Spearmon. “But after a chat with the doctor I am back and ready to run. If the jet lag disappears as easily as I expect it to I am confident I will be able to impress the crowd on the weekend.”

Powell has remained in Melbourne for the meeting and so will be on hand should his record fall.

Another familiar name in the sprints is Calvin Smith Jr whose father, the former 100 metres world record holder, won the 100m at what was then the Australia Games in Melbourne back in 1985.

Rutherford and Watt had an abortive meeting in Perth on 16 March, with Watt running through on his first jump and then withdrawing after experiencing calf cramps.

Rutherford jumped 7.89m on that occasion, Lapierre had a wind-assisted 7.96m in Sydney a week later and Watt leapt 7.72m in Brisbane last week.

“We’ve all got one competition under our belt, so Melbourne should be pretty even,” commented Watt recently.

High jumpers Liam Zamel-Paez and Brandon Starc both jumped lifetime bests in Perth recently, when they went over 2.29m and 2.23m respectively. The two young Australians will get the chance to back up those performances up, and perhaps improve them, when they go up against American jumper Dusty Jonas.

Jonas, a 2008 Olympian, jumped 2.34m indoors recently, a year to the day after rupturing an Achilles tendon. He then went on to win the US indoor title.

BACK
Pages related to this articleAthletes
Dusty Jonas 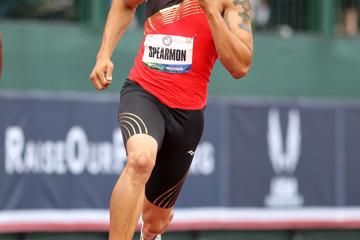 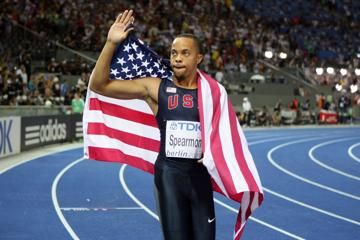 Korir and Spearmon make their way to Melbourn...