In the Russian capital, Straneo stunned everyone with her tactic of going to the front from early in the race and staying there.

Straneo set the pace for most of the race and only Kenya’s Daegu 2011 gold medallist Edna Kiplagat was brace enough to hang on.

She led until the last two kilometres, when Kiplagat finally pulled away from the courageous Italian to clinch her second consecutive title, crossing the line in 2:25:44 with a gap of 14 seconds over Straneo.

"I did not have a plan to lead the race. I just planned to keep my pace according to my feeling. Before the race, I spoke with my coach Beatrice Brossa as well as the FIDAL (the Italian athletics federation) national team coach and former international marathon runner Massimo Magnani," reflected Straneo.

"They suggested to me that I should run strongly from the beginning and run at a 3:25 pace for each kilometre. I stuck to that pace and I did not care what the other girls were doing," she added.

"I was not really aware of what was going on behind me until 35 kilometres. Turning back, I realized that I was running only with Edna Kiplagat, with seven kilometres to go. This is where I truly realized that I could win a medal.

"In the final five kilometres, I had stiff legs and I also expected Kiplagat to launch her attack. The silver medal made me very happy because, when Kiplagat attacked, I was just too tired and I was only looking forward to crossing the finish line," said Straneo.

"Many of my rivals suffered from the hot conditions in Moscow (22 of the 69 starters failed to finish the race) but I could cope with the weather and I know I run well when it is hot."

Straneo crowned her great year with the honour of becoming the Italian Women’s Athlete of the Year in the traditional end-of-year poll by FIDAL.

She was born in Alessandria in Piedmont on 5 April 1976 and made the news in Italy, not just for her thrilling run which saw her become the oldest ever women’s marathon medallist at the World Championships but also her back story.

She was a talented club runner but suffers from a rare hereditary disease called spherocytosis, an anaemic condition which can damage red blood cells. She needed to have her spleen removed in May 2010, which then allowed the oxygen-carrying red blood cells to grow normally.

"I felt so bad in 2010. I could not stand for a long time because I felt so weak. I had problems with my stomach, my spleen grew so big. It was 25 centimetres long and weighed 1.8 kilogrammes. The operation was so painful, that it was like giving birth to a third child. It was a terrifying thing but now I feel reborn and also my blood counts have returned to normal."

She made her first major breakthrough at international level in September 2011 when she smashed her lifetime best of 2:41:15, which she had run at the Carpi Marathon in 2009, and reduced it to 2:26:33 in the Berlin Marathon.

After that feat in the German capital, Straneo confirmed that this was not a flash-in-the-pan when she won the Italian half marathon title at the 2012 Roma Ostia Half Marathon in an impressive 1:07:46. In April 2012, she improved the Italian marathon record to 2:23:44 in the Rotterdam Marathon before going on to finish eighth at the London 2012 Olympic Games in 2:25:27.

"After running 2:26 in Berlin, I decided that it was the right time to focus on my running career and I stopped teaching to train full time," said the former kindergarten teacher, who has two children of her own.

In 2013, Straneo won the Mediterranean Games half marathon gold medal, which raised her hopes for a good performance in Moscow, which she fulfilled admirably.

She is married to Manlio, a former 400m hurdler and she gave birth to her first child, Leonardo, in 2006. Her daughter Arianna followed a year later.

"My husband was in Moscow and my result did not sink in immediately with him after I crossed the finish line. My children watched me on television (back in Italy) and I don’t think that they fully realized what I did in Moscow."

From silver medal to the school run

However, Straneo confessed that her life has not changed very much since her World Championships silver medal.

"I still cannot believe that I am a top runner with a world medal around my neck. I wake up at 7.15am and I accompany my children to school and I pick them up at 4.00pm. I do two training workout sessions, shopping and some housework."

"It makes me smile when my children ask me: ‘Mom, are you famous?"

Just three months after her big race in the Russian capital, Straneo ran her second marathon of the year in New York, where she finished fifth in 2:28:22.

"I really wanted to run in New York after the race was cancelled last year because of Hurricane Sandy. New York was a very tough race because of a chilly wind and I chose to start more conservatively than in Moscow as I knew that the second half of the race would be more difficult.

"I chose to stay in the pack but I admit that the first part of the race was very slow. I changed pace in the second half clocking 1:12:01 from 21km to the end, compared to my first half in 1:16:01. I fought it out for third place with Jelena Prokupchuka and Christelle Daunay, but at the end I was too tired when they pulled away."

Straneo’s plans for 2014 are still being established although she hopes to perform a bit of alchemy at the European Athletics Championships in Zurich and turn her Moscow silver medal into a continental gold.

"I haven’t talked about the plans for 2014 with the Italian federation yet (and she has made no decision about the IAAF World Half Marathon Championships in Copenhagen on 29 March), but I would like to run a spring marathon in preparation for Zurich,” commented Straneo.

In fact, it might not just be Straneo to the fore in Zurich wearing the familiar blue vest of the Azzurri.

Italy’s team in the women’s marathon could also include Emma Quaglia, who was the third European home when finishing sixth in Moscow, while the defending European champion from 2010, Anna Incerti, will return this year from maternity leave after giving birth to her first daughter Martina in May.

BACK
Pages related to this articleAthletes
Valeria STRANEO 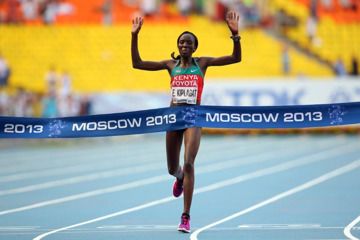 Supermum Straneo finally gets to realise her ...