LePage and Rodriguez the overnight leaders in Talence

Canadian Pierce LePage and Cuba’s Yorgelis Rodriguez lead after day one (17) of the Decastar combined-event meeting in Talence, the final competition of the 2016 IAAF Combined Events Challenge.

In fresh, bright conditions, LePage, 20, went straight into the lead by winning his 100m heat in 10.46 – which would have counted as a personal best but for the +2.7m/s tailwind – ahead of Ukrainian Oleksiy Kasyanov (10.65) and France’s Olympic silver medallist Kevin Mayer (10.82).

The young Canadian then extended his lead in round two, going out to 7.75m with his second effort in the long jump. It was a personal best and the farthest of the competition. Kasyanov had the second best jump of 7.42m to stay second, while Mayer remained third with 7.33m.

Another PB in the shot put saw LePage stay top of the pile. Clearly enjoying the intimate setting, he hit 14.18m with his second effort, though his lead was dented as Kasyanov produced a last round season’s best of 14.82m. That was the second best effort overall behind Norway’s Lars Rise, who recorded 14.98m. Mayer stayed third with 14.29m.

Though LePage was short of his best in the high jump, a 2.02m clearance was still the second best of the field and enough to keep him in the lead.

Estonia’s Maicel Uibo dominated, clearing 2.05m, 2.08m, 2.11m and then 2.14m, much to his personal delight and that of the crowd, who were three-deep at the rail nearest the pit. It moved him third ahead of Mayer, who could muster just 1.90m. The entertaining Kasyanov stayed in second after howling his way to 1.99m.

The 400m concluded action for the day, by which time the sun had lost its daylong battle with the thickening clouds. Yet LaPage wasn’t going to be left in the shade. He opened up through the second bend to finish in 48.01, the fastest time in the field to amass 4451 points.

That time extended his lead over two-time world indoor silver medallist Kasyanov, who came home in 49.19 to finish the day with 4280 points. Uibo held on to third overall after posting 51.62. Mayer jogged his lap solo: citing fatigue after his silver medal heroics at the Rio Olympics, he will treat day two as a victory parade with his French fans.

The Canadian is well on his way to a PB performance, which he will need if he is to continue to repel the challenge of the experienced field on day two.

Rodriguez digs in for narrow lead

No one can catch Germany’s Carolin Schafer at the top of the 2016 IAAF Combined Events Challenge standings, but that did not detract from an entertaining day in the heptathlon.

Rodriguez, 21, demonstrated the same strong form that resulted in a seventh place finish at the Rio Olympics. The Pan-American Games champion is competing in her fifth heptathlon of the year, but showed little sign of fatigue as she opened with 13.61 (+2.2) in the 100m hurdles, a time that equals her third best career performance.

Two-time European champion Antoinette Nana Djimou Ida was fastest in the first event, winning the third heat in 13.21 (+2.1). The top four finishers of that heat were the top four overall, with USA’s Chantae McMillan, German Claudia Rath and Ukraine’s Anna Kasyanova coming in behind the Frenchwoman. The Netherlands’ 2014 world indoor champion Nadine Broersen won heat two in 13.60 to go fifth.

Nana Djimou Ida lost ground in the high jump. She needed three attempts to get over 1.75m before fouling out at 1.78m, pushing her down to sixth overall.

That allowed Rodriguez to pounce. She and 2015 Talence winner Gyorgyi Zsivoczky-Farkas cleared 1.87m – a PB for both – to move first and second respectively. Broersen cleared 1.81m to go third overall.

Zsivoczky-Farkas then took the lead after posting the day’s best mark in the shot put. She reached 14.33m, while Rodriguez could only hit 13.19m and so dropped to second, though by just six points. Broersen’s 13.56m meant she stayed third, while Nana Djimou Ida moved back to fourth with 14.24m.

Yet Rodriguez showed great mettle to recover the lead in the last event of the day. She ran 24.35 in the 200m to tally 3788 points at the end of day one.

Zsivoczky-Farkas’ PB 25.57 leaves her trailing in second place by 96 points. Nana Djimou Ida moved back to third with a 25.07, while Broersen dropped to fourth after a 25.23. Fastest in the 200m was Evelis Aguilar with 23.90, moving the Colombian to fifth overall. 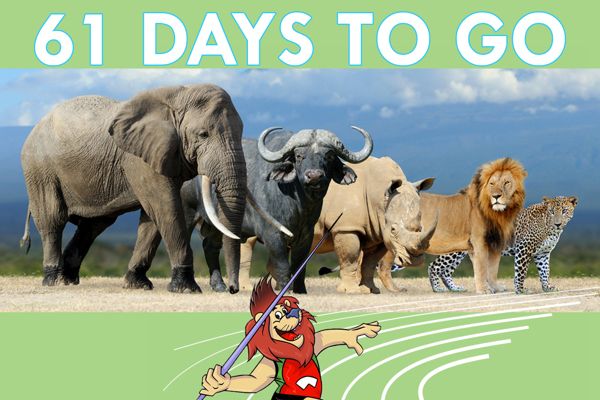