World-leading marks were set in six track events at the Prefontaine Classic, but it was the women’s 3000m that produced the greatest set of marks at the IAAF Diamond League meeting in Stanford on Sunday (30).

Ayana was ultimately never a factor but the other big contenders were all still in the lead pack as they approached the final kilometre. Ethiopia’s Letesenbet Gidey made an early break and led from Dibaba with 800m to go with Hassan and Germany’s Konstanze Klosterhalfen also close behind.

With 600m left, Dibaba started to fall behind, while Hassan and Klosterhalfen were gaining. Gidey took the bell at 7:13.97, with Hassan a little more than second back. Hassan passed Gidey with 250 metres left as Dibaba was now contending with Klosterhalfen. Hassan pulled away down the homestretch and went on to win in 8:18.49 – the fastest time in the world since 1993 and a three-second improvement on the European record.

Klosterhalfen passed Dibaba and then Gidey to take second place in 8:20.07, also finishing inside the previous European record. Gidey finished third in an Ethiopian record of 8:20.27 while Dibaba was fourth (8:21.29) and Obiri sixth (8:27.26).

In an exciting three-way finish, world cross-country champion Joshua Cheptegei held on to take victory in the men’s two miles.

The tightly bunched pack was led by a pacemaker through 880 yards in 2:03.4 and the first mile in 4:04.9. After the pacemaker stepped off, Selemon Barega, Cheptegei and Paul Chelimo were left to fight it out.

Over the next lap Barega put some distance between Cheptegei and Chelimo, but Cheptegei made up the lost ground on the next lap, leaving Chelimo nearly three seconds off the pace with a lap to go. Cheptegei moved on to Barega’s shoulder with 200 metres to go and passed him at the top of the final bend.

Chelimo, meanwhile, was starting to motor and was closing with ever stride as he entered the home straight. Cheptegei passed Barega and for a moment it looked as though Chelimo’s momentum would take him across the line first, but the Ugandan held on to take a narrow 8:07.54 victory over Chelimo, whose 28.63 last 200m left him .05 short. Barega faded to third in 8:08.69.

After a surprise defeat in Oslo, Kenya’s world steeplechase record-holder Beatrice Chepkoech was keen to assert her dominance in Stanford.

A gap began to open after a quick 2:55.07 opening kilometre by Chepkoech, with Jeruto in second followed by Celliphine Chespol, world champion Emma Coburn and Hyvin Kiyeng of Kenya. Although she had slipped off world record pace, Chepkoech had a 10-second gap on the field with a lap to go.

Coburn, who had fallen earlier in the race, made up a bit of ground over the last two laps, but Chepkoech was a comfortable winner in a world-leading 8:55.58 – the fifth-fastest time in history – with Coburn second in 9:04.90 and Kiyeng third in 9:05.81.

A slew of fast finishers made the most of the women’s 1500m as Kenya’s Olympic champion Faith Kipyegon – making her return to competition after maternity leave – held off final lap assaults by Great Britain’s Laura Muir and USA’s Shelby Houlihan.

Timothy Cheruiyot retained his title in the Bowerman Mile, the Kenyan winning in a world-leading 3:50.49. Djibouti’s Ayanleh Souleiman won the sprint for second (3:51.22) against the Norwegian Ingebrigtsen brothers Filip (3:51.28) and 18-year-old Jakob, (3:51.30).

Caster Seymenya cruised to a 1:55.70 victory in the women’s 800m, improving on her own meeting record. USA’s Ajee Wilson, Raevyn Rogers and Hanna Green filled the next three places, all with sub-1:59 clockings.

Perhaps the most impressive mark of the day on the men’s side belonged to USA’s Rai Benjamin, whose 47.16 in the men’s 400m hurdles set the tone for the Pre Classic, as it was the initial running event on the programme.

Starting in lane five, with the British Virgin Islands’ Kyron McMaster on his right and Turkey’s Yasmani Copello in lane four, Benjamin could dictate his own race. McMaster tried sticking with Benjamin for the first half, but Benjamin moved up a gear on the final bend and pulled ahead.

He crossed the line in 47.16, the fastest time in the world this year and his second-best performance to date following his 47.02 PB from last year. McMaster finished a distant second in a season’s best of 48.94.

USA’s Christian Coleman pulled away from world champion Justin Gatlin for a convincing win in the men’s 100m in a world-leading 9.81 to Gatlin’s 9.87. After being run down by Canada’s Andre De Grasse in the Ostrava last week over 200m, the world indoor 60m record-holder showed no signs of fatigue as he established himself as the favourite for the IAAF World Athletics Championships Doha 2019. Great Britain’s Zharnel Hughes finished third in 9.97.

“It’s always good to run on home soil,” said Coleman. “I just compete and try to come out with a win, but, obviously, guys are steadily getting better and better and always running faster. It’s going to take some pretty good training to get a gold medal at the end of the year.”

Nigeria’s Blessing Okagbare was a surprise winner in the women’s 200m. Great Britain’s Dina Asher-Smith had the lead coming off the turn in lane four, but then Jamaica’s double Olympic champion Elaine Thompson forged ahead as they headed to the finish. But Okagbare, running in lane eight, swept by Thompson in the final few meters to win in 22.05, just 0.01 shy of her own African record.

Thompson finished in second in 22.21, while Asher-Smith held on for third in 22.42 and Bahrain’s Salwa Eid Naser finished fourth in a Bahraini record of 22.51.

Michael Norman’s return to the west coast was reminiscent of his last victory in California when he sped to 43.35 in April. He was even with US compatriots Fred Kerley and Kahmari Montgomery, but powered his way to the line in 44.62. Montgomery finished second as Kerley faded to third, 45.12 to 45.33.

Spain’s Orlando Ortega won the men’s 110m hurdles in 13.24 over France’s Wilhem Belocian and Jamaica’s Olympic and world champion Omar McLeod, who were both timed in 13.29 with the nod going to the Frenchman.

Brian Russell for the IAAF 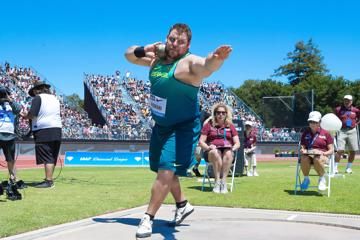