Head-to-head encounters feature strongly on the fourth stop of the 2016 IAAF Diamond League in Eugene, Oregon, giving the famed Prefontaine Classic meeting the look of an Olympic Games preview on Friday and Saturday (27-28).

At the IAAF World Championships Beijing 2015, Dafne Schippers and Elaine Thompson produced the fourth and seventh fastest 200m performances of all-time when they ran for gold and silver in the Chinese capital.

They will meet again on a fast track at Hayward Field and joining them in the 200m will be Tori Bowie, third at last year’s world championships 100m and the fastest woman in the world so far this year.

With the depth of US 100m hurdlers, it’s not surprising to see a great field on the line in Eugene.

There will be five women with personal bests quicker than 12.40 on the start line in Brianna Rollins, Sharika Nelvis, Jasmine Stowers, Kendra Harrison and Dawn Harper Nelson.

Harper Nelson, the 2008 Olympic champion and 2015 Diamond Race will make her season debut in this event and two-time world Indoor 60m hurdles champion Nia Ali will try and translate her winter success into the outdoor season.

An injury will keep Allyson Felix out of the women’s 400m but, even without her, the field is spectacular.

Seven of the eight women have a personal best under 50 seconds and two of the women on the start list, Quanera Hayes and Shaunae Miller, have broken that mark already in 2016.

With so much depth, expect it to probably get even quicker on Saturday while the reigning Olympic champion Sanya Richards-Ross, who has announced that she will retire after the 2016 season, will be racing in her last Prefontaine Classic.

Kirani James and Lashawn Merritt will duel once again in the men’s 400m.

James cracked 44 seconds at last year’s Prefontaine Classic, beating Merritt in one of the meeting’s races.

At the Drake Relays last month, James also had the upper hand, maintaining his lead over the final 100 metres to win 44.08 to 44.22. This rivalry has been so close that the deciding factor could be which runner gets the inside lane.

Machel Cedenio, of Trinidad and Tobago, has the fastest 2016 best of the rest of the field and placed second to Merritt at the opening Diamond League meeting of the summer in Doha.

Ferguson Cheruiyot Rotich hopes to build on his victory in Shanghai in the men’s 800m. The Kenyan will be facing a tough field that includes Mohammed Aman, Amel Tuka, and 2016 world indoor champion, Boris Berian while 2012 Olympic Games silver medallist Nijel Amos will try to bounce back after his modest sixth place finish in Rabat.

In the distance races, 18-year-old Yomif Kejelcha returns to defend his title in the 5000m.

The prodigious Ethiopian used last year’s victory as a launching pad to senior global success and since last year’s win, Kejelcha lowered his personal best to 12:53.98 and kicked to a world indoor championship 3000m gold medal.

On Saturday, his challengers include his compatriot and Shanghai winner Muktar Edris and Kenya’s two-time world half marathon champion Geoffrey Kamworor.

Faith Kipyegon’s 3:56.82 1500m win in Shanghai was arguably the performance of the meeting two weeks ago and she enters this race as the favourite ahead of Ethiopia’s Dawit Seyaum.

The race within the race could give some insight on the American pecking order heading into the US Olympic Trials: 2015 Prefontaine Classic winner Jenny Simpson, Shannon Rowbury, Brenda Martinez and Treniere Moser are all entered.

Last year, Djibouti's Ayanleh Souleiman got the best of the Kenyan but this year Kiprop has so far looked a cut above the rest of the world. His 3:32.15 win from Doha is the fastest time in the world at this early stage of the season.

A strong group of hurdlers will aim to halt Omar McLeod’s momentum in the men’s 110 hurdles.

McLeod has produced the three fastest times of the year and, on Saturday, he will face many of the same men he beat in those races.

Renaud Lavillenie exhilarated the crowd along the back stretch crowd last year with his 6.05m clearance in the pole vault but the 2012 Olympic champion and world record holder, could have some competition this year.

USA’s Sam Kendricks beat Lavillenie two weeks ago in Shanghai, the first ever Diamond League victory for an American compared to the record 27 owned by the Frenchman.

Reigning Olympic and world champion Christian Taylor heads up a men’s triple jump field that also features Teddy Tamgho, Marquis Dendy and Will Claye while 18-year-old Vashti Cunningham will look to continue her incredible 2016 in the women’s high jump. In her last trip to Oregon, the Ls Vegas-based Cunningham won the world indoor title in Portland.

On the track, Mo Farah will run his first outdoor track race since his double gold exhibition in Beijing when he runs in the 10,000m.

Viola Kibiwot, second in Rabat last week with a time of 14:29.50, looks like the best of the rest while Vivian Cheruiyot, Mercy Cherono and Gelete Burka all ran quick 3000m times in Doha to kick off the Diamond League season. 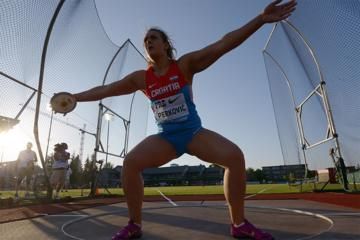 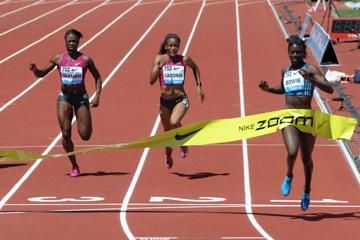 Schippers to face Thompson and Bowie over 200... 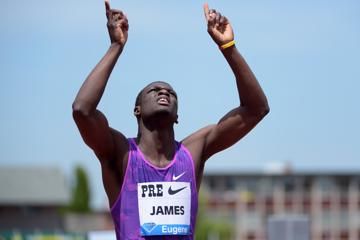 Eugene provisional entry lists, as at 26 May ...